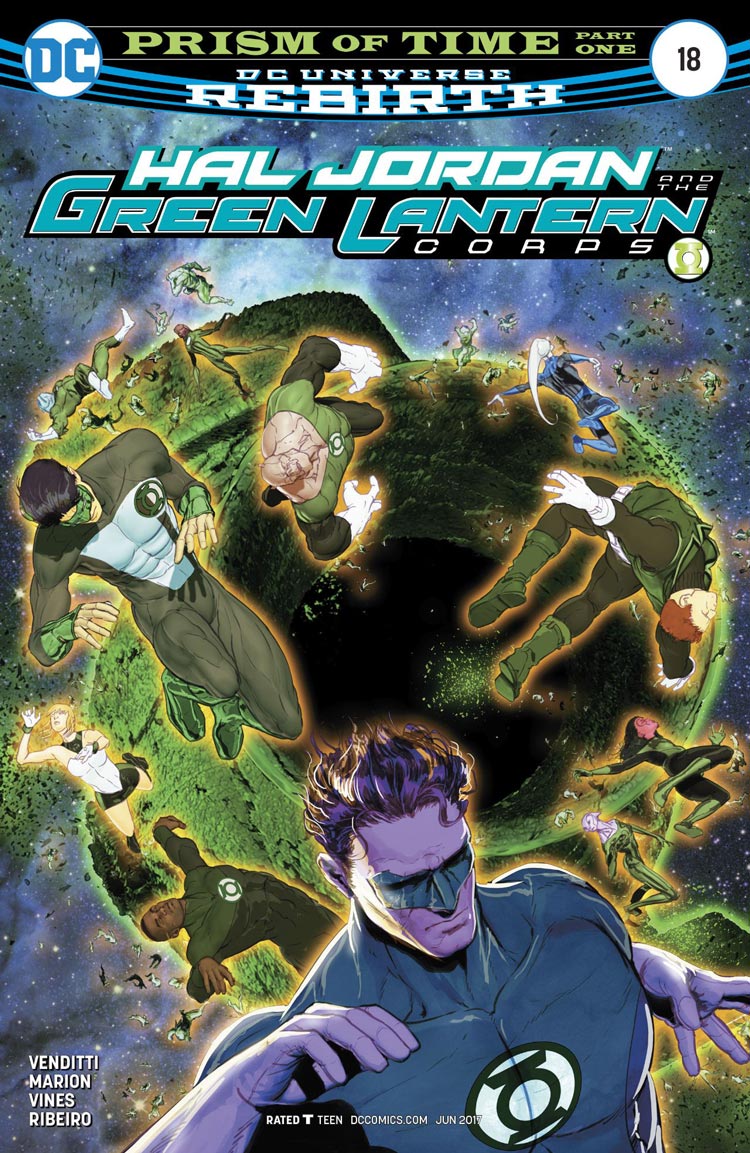 The Green Lantern and Sinestro Corps experience growing pains as their merger begins in earnest. But sinister happenings involving time travel launch the combined police force into the next plot arc.

Hal Jordan and the Green Lantern Corps is a book that seems to work a lot better in the big picture than in individual issues. While it’s had a few issues that were highly satisfying on their own, like the Guy Gardner spotlight a few issues back, most issues jump around between characters and build tension with minimal release. Each plotline is advanced by an inch without much attention paid to making the individual issue worthwhile by itself.

The thing is, this style does work when you read an entire arc all at once. The multiple plotlines weave together when issues are read back-to-back and tell a satisfying, action-packed, cinematic story.

But until all the issues of an arc come out and you can read them all at once (or, if we’re being realistic, until the trade is released and you can read the issues in a single volume) you’re left with a series of issues that build action with frustratingly little payoff. It feels less like a serialized story and more like one-sixth of a singular story.

This is one of those somewhat-frustrating twenty-minutes-of-a-two-hour-movie issues. It’s the first issue of a new arc, and opens with a Green Lantern and a Yellow Lantern being ambushed by unknown malevolent aliens. From there, we peek in on Green and Yellow Lanterns trying to get along, not entirely successfully, on Mogo, and on Saint Walker, who is attempting to resurrect the Blue Lantern Corps. We conclude with a special guest appearance that supplies the cliffhanger hook for the next issue.

This issue does have a good moment, when Guy and Arkillo put a stop to a brawl between Lanterns. It’s a nice character moment that builds on elements from the prior two issues. Between that, John Stewart’s leadership moments, and Hal and Kyle’s banter, the book does a good job of ensuring that all the Earth Lanterns get some time in the spotlight and that their voices are well-developed and authentic. It’s a tricky juggling act that the creative team manages well.

Ultimately, this issue will probably improve with age. The totality of this series has been growing more impressive with each issue, as seeds are planted for later plots and character moments are skillfully interwoven with story. But as an individual comic issue it’s lacking.

The art is a little bit rougher than has been the standard in this comic so far, but looks great overall. The fight scene that serves as the issue’s centerpiece is particularly well-done, with a dynamic style that gives great physicality to both the brawling and the use of constructs in battle. As is usually the case with Green Lantern comics, the colors are impressive, with ethereal glowing effects on rings and bright colors for the uniforms of the various Lanterns.

This issue is a promising start for the next story arc, even if it’s not necessarily a great issue on its own. It will probably be worth reading eventually, but for now it’s all promise and no payoff.