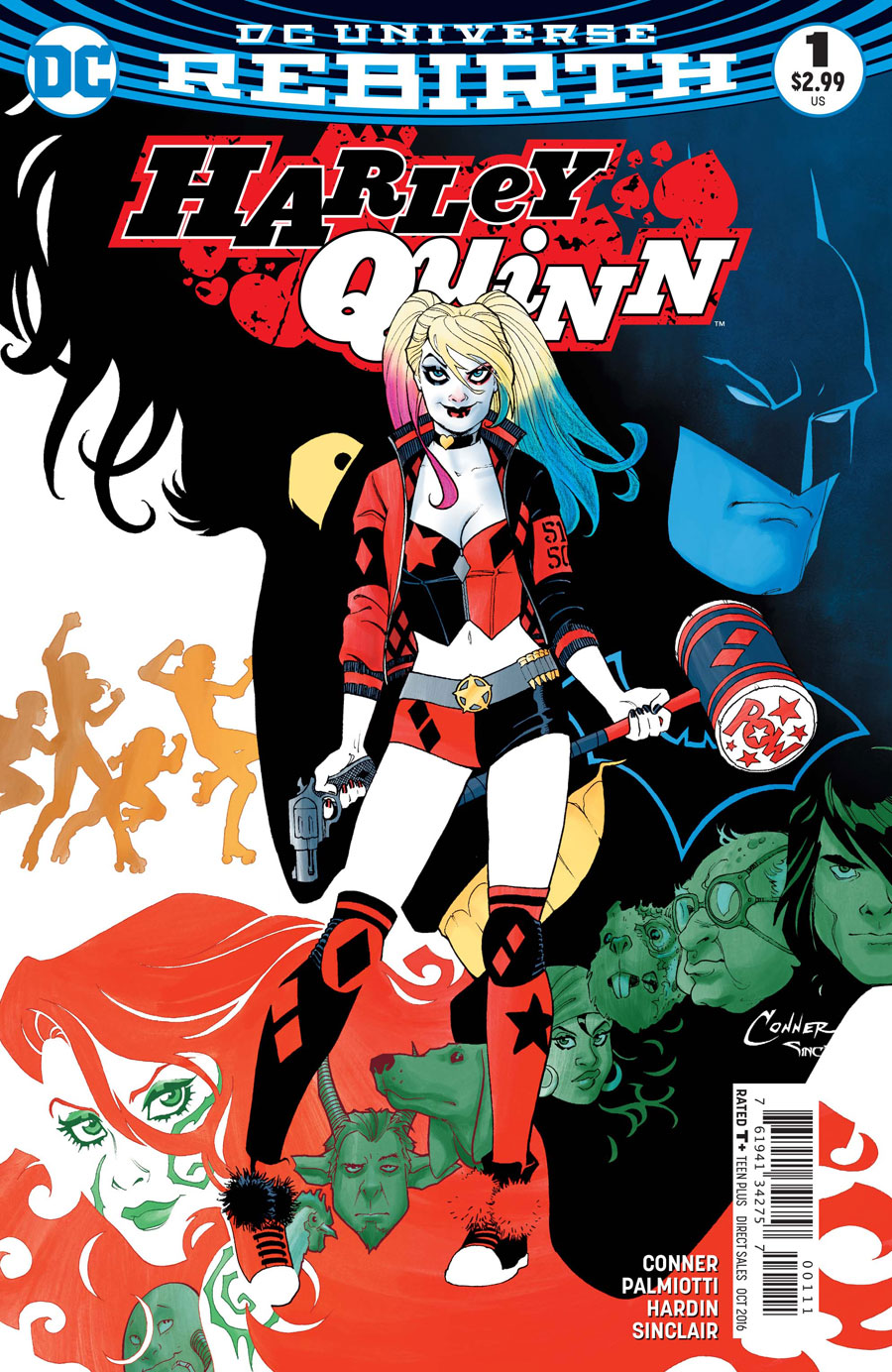 While the rest of the DC line submits itself to reboots and revamps, the Harley Quinn juggernaut barrels through Rebirth, slowing down just enough to reacquaint the audience with the burgeoning supporting cast before gearing back up for the next madcap adventure.

Over the last two years and counting, Harley Quinn architects Jimmy Palmiotti and Amanda Conner have bought themselves an increasing amount of distance from the norms of superhero storytelling, an achievement that may have just reached its current peak with the last two issues.

While DC’s other tentpoles like Batman and Superman roared into high octane finishes to wrap up their arcs and hand off to brand new creative teams, Team Harley cruised into the finish line of the New 52 with a quiet, heartfelt moment between Harley and Ivy and open the new volume on a similar note.

From their collaboration with Justin Gray on Power Girl and Terra through to Starfire with Emanuela Lupacchino and (last issue’s) Elsa Charretier, Conner and Palmiotti have steadily worked to refine and foreground the relationships between the women in their books, by far the most satisfying element of this entry. This issue picks up with Harley treating Ivy to the spa day she promised in return for her help in saving a tree in Harley’s Brooklyn neighborhood, letting us linger on the small, intimate moments that tend to fall by the wayside in most superhero comics, and just about every current one that isn’t called Patsy Walker A.K.A. Hellcat.

The writers remain cagey about the future of Harley and Ivy’s relationship, pulling right up to the edge of sex without crossing it, and there’s a certain power to cultivating a space like that for the present. The kind of intimacy we see between them is rare in the medium — much of it through Chad Hardin’s command of body language — but there’s a particular novelty to Harley and Ivy openly saying they love each other.

Whether you read their relationship as platonic or romantic (at this point, the former being more or less apocryphal, it’s a very welcome change of pace from the catty, adversarial dynamics that high profile titles like Betty and Veronica or Birds of Prey have been falling back on in recent weeks.

The appeal of the issue from the moment of their parting returns to considerably more lowbrow territory, segueing into a reintroduction of the major cast members before veering off into a zombie plague sweeping through Brooklyn kicked off by a hilariously unexpected callback to Grant Morrison, Mark Millar, Steve Yeowell, and Brendan McCarthy’s Skrull Kill Krew. Having already notably lampooned all of Marvel’s cosmic characters and integrated a Deadpool parody character into the cast, Conner and Palmiotti appear to be anything but done with mining the house of ideas for targets.

That doesn’t make anyone on the home team any safer from their antics as the zombie plague itself kicks off in the background of a conversation between Harley and Red Tool with the Scooby Gang as its first victims.

No one’s out to reinvent the wheel at the opening of this newest chapter in Harley’s saga. Hardin continues to balance his tongue-in-cheek cartooning with precise facial expressions while Conner and Palmiotti joyfully swing from emotional catharsis to dark humor, and that’s really the key to the title’s continued success.

In a genre that mostly subsists on shock and spectacle, pacing itself out as an endless series of sprints, Team Harley is running a marathon that has no interest in exhausting either themselves or the audience before they’re through. It’s an example that both DC and Marvel ought to pay serious attention to, especially considering that the mindset has expanded Harley Quinn from a single breakaway hit into three spin off miniseries and a handful of top selling specials and annuals.