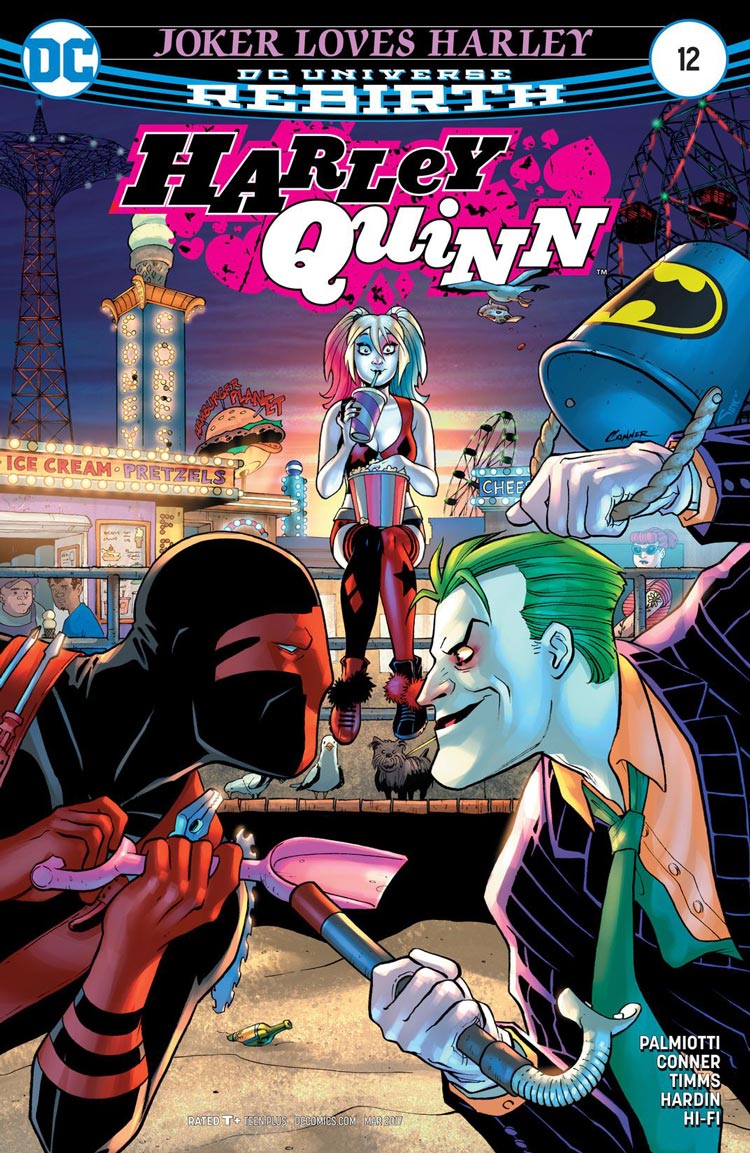 It’s the Nice Guy vs the Bad Boy as Red Tool and The Joker face off to fight over a woman that doesn’t even like either one of them like that.

The thing about what’s going on in Harley Quinn right now is that we’re seeing very familiar elements adding up to an unfamiliar whole. The “nice guy” stepping in to intervene on behalf of a woman who doesn’t reciprocate his feelings, the abuser who claims to be reformed and freshly worthy of love, and the woman twisting in the wind between them.

What really sells the satire that Conner and Palmiotti are building up in the confrontation between Red Tool and The Joker is how ambiguous the target of their lampooning is.

During their reign of terror, the pair have taken direct and unmistakable aim at everything from Fifty Shades of Grey to Guardians of the Galaxy, and perhaps most improbable of all, Skrull Kill Krew. The applicability of the dynamics in play in the current arc remains open to allow comparisons to everything from the attitudes promoted by Ready Player One, John Green’s bibliography, or even the Twilight franchise.

The choice to avoid referential humor in this arc probably has more to do with how seriously the creative team takes the topic of domestic abuse, but the reality of just how many different popular narratives could feel the sting of this issue says a lot about where we are as a culture when it comes to validating men’s entitlement to women’s affection.

The central focus of the issue is on Harley regaining control of the situation and establishing why it was hers to maintain in the first place. There’s a slippery kind of moral high ground that Red Tool occupies in confronting a known abuser trying to reinsert himself in the life of his victim, but it’s a position that Conner and Palmiotti refuse to allow him to occupy.

As satisfying as it is to see him lay into The Joker, it isn’t his violence to dish out. That belongs to Harley, a point that the creative team drives home with their own peculiar ethical standards by allowing Harley an act of revenge that trumps Red Tool’s blunt beating in both scale and imagination. In a world as casually violent as Harley’s, it’s the most lurid and slapstick acts that are endorsed and rewarded.

There’s at least one additional layer to Harley putting The Joker in the middle of a busy intersection with a sign tied to him disparaging Brooklyn beyond gaining the moral and aesthetic upper hand. Harley isn’t just reclaiming her agency from Red Tool, she’s also demonstrating to The Joker that she belongs to a community whose values she both understands and shares. She isn’t the vulnerable woman who could be manipulated into making him her entire world anymore.

The decision to even bring The Joker back at all after Harley’s decisive and bloody separation from him in pre-Rebirth issue #25 is an interesting one. The Arkham incident was as decisive of a punctuation mark on the creative team’s perspective on their relationship as one could ask for, but it was also executed at a time when there wasn’t enough good will with the readership to play with the situation for any extended length of time.

For the truly dedicated in the fanbase, Harley’s emphatic split from The Joker was telegraphed three months in advance of the confrontation with the solicitation of the cover featuring the parody of her jacket in the Suicide Squad film. Relative to her relationship with Poison Ivy, which has been slowly simmering for several years, it was the narrative equivalent of ripping a band-aid back.

A year out from that initial split, there’s enough breathing room to come back to The Joker and properly examine that era of Harley’s life through her eyes without being mistaken for telegraphing a return to that particular status quo. What the team proves this issue is that they both could and should return to him.

Instead of the usual surreal dream sequences by high profile guest artists, Chad Hardin steps in to deliver the first sobering look at the history of the abuse Harley’s suffered at The Joker’s hands in all of her incarnations in an issue otherwise controlled by John Timms. This is for the core team, and the core team alone to tackle.

There’s a bittersweet Easter egg in the depiction of Harley in her classic costume at the beginning of the timeline and the dream sequence stretches out even further to take full advantage of the prismatic age to drive home the point about the universality of the abuse.

In addition to seeing Harley in her various costumes and hair configurations, there’s also a wink to her fantasy of a suburban life with The Joker at the climax of the Suicide Squad film. There’s never been a good Joker and there never will be, is the inescapable conclusion.

The end of the issue finds them in a complete reversal of fortunes with the Joker at Harley’s mercy, begging him to hear her out. It’s a dynamic that extends beyond the immediate story to draw on the Joker’s current place in the Batman mythology.

Last issue, I mentioned the fact that no one really knows what happened to The Joker following his amnesiac period at the apex of Scott Snyder and Greg Capullo’s Batman run, which is a hanging thread that Harley Quinn #13 promises to resolve. The Joker well and truly is at Harley’s mercy in every way. He isn’t just eerily replicating the typical manipulations of an abuser trying to worm their way back into a survivor’s life, he’s begging for his continued relevance as a major concern in the DCU.

Here is Harley Quinn, the character who, a short time ago, was assumed to never be able to stand on her own two feet, holding the fate of Batman’s oldest and ostensibly most iconic foe in her hands.

These are the kind of subtle and multilayered calculations that elevate Harley Quinn beyond shallow wish fulfillment and power fantasies to a critical re-evaluation of how the medium as a whole treats women’s stories.