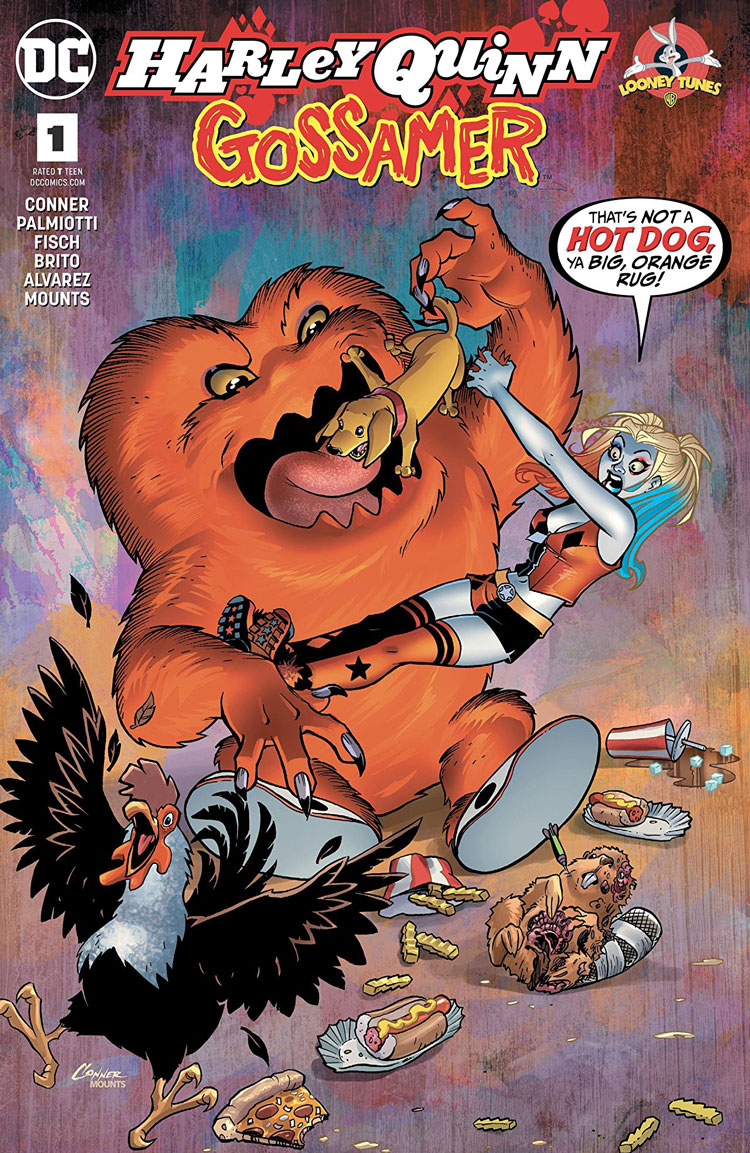 Harley in a hurricane. Harley needs a place to stay. Our favorite harlequin needs to solve a couple of problems, and each of them involves a giant mass of sentient hair. No matter her circumstances, Harley figures things out and finds that she has a red companion to assist her along the way.

The DC/Looney Tunes comics are always a treat. They don’t just show classic characters from two different worlds, but they are experimental in how they cast them. For a majority of this issue, Gossamer is thrust into the DC Universe, while Harley explores the world of the Looney Tunes in the back-up by Sholly Fisch, Dave Alvarez, and Saida Temofonte. In each case, the teams grasp not only the grounding of the main dimension, but how to infuse the characters into each one.

Amanda Conner and Jimmy Palmiotti capture not just the spirit of Harley or Looney Tunes, but they also find a way to meld these together to form a new narrative entity. This comic is a good example of character constancy and how some elements need to be a part of a story, regardless of the context. Harley keeps her comedic bent through the story with well-timed jokes, and Gossamer’s silence is its own storytelling force.

Conner and Palmiotti also pull no punches with regards to Harley’s queerness, openly expressing her love for Poison Ivy, which makes the comic even more enjoyable. Another feat pulled off by this writing team is the fact that Harley’s relationship with the Joker is blatantly cast as unhealthy. Such an element is not routinely discussed, so it’s refreshing to see that the interaction between the two is examined and exposed for its problematic elements.

Pier Brito does well with broad action, though characters’ expressions seem inconsistent with the events around them. In scenes where there is a lot of movement, Brito excels. It’s never hard to track where the story, or its characters for that matter, are moving. The facial expressions unfortunately fall flat throughout this tale, and there are times where posing is not quite fitting for the story. The use of more sexualized imagery for Harley and Ivy was also a sore note for the story. While it was nice to see their romance portrayed more overtly, some of their rendering played more into unhelpful tropes than fully realized examples of love between two queer women.

With the Looney Tunes comics, creators need to be careful when toeing the line between reality, adaptation, and source material, and Paul Mounts does just that. Through these colors, Gossamer in particular feels as though he is a part of the DC Universe, while still highlighting him as a stand-out figure just as in his original cartoons. Mounts helps readers to suspend any disbelief, and from Gossamer’s first appearance, nothing feels out of touch. Each character seems real and every pallet is on point.

Fisch, Alvarez, and Temofonte make a delightful backup story reminiscent of the Looney Tunes shorts. It’s packed with expertly executed humor and a visual style that brings cartoonish elements to a more reality-based character. This is a short and sweet short that provides a different dynamic to the major story of the issue, but that also highlights how bringing these worlds together is a feat of skill.

Harley Quinn/Gossamer is a comic I figured I would enjoy, but that is still full of surprises. Bringing these characters together, especially with very distinct creative styles, was an exercise in understanding disparate universes and how they could work together. I had some reservations about some of the art, though overall this comic is still entertaining. I’m a huge fan of mash-ups, comics-inclusive, and to see how this one played out was a joy.