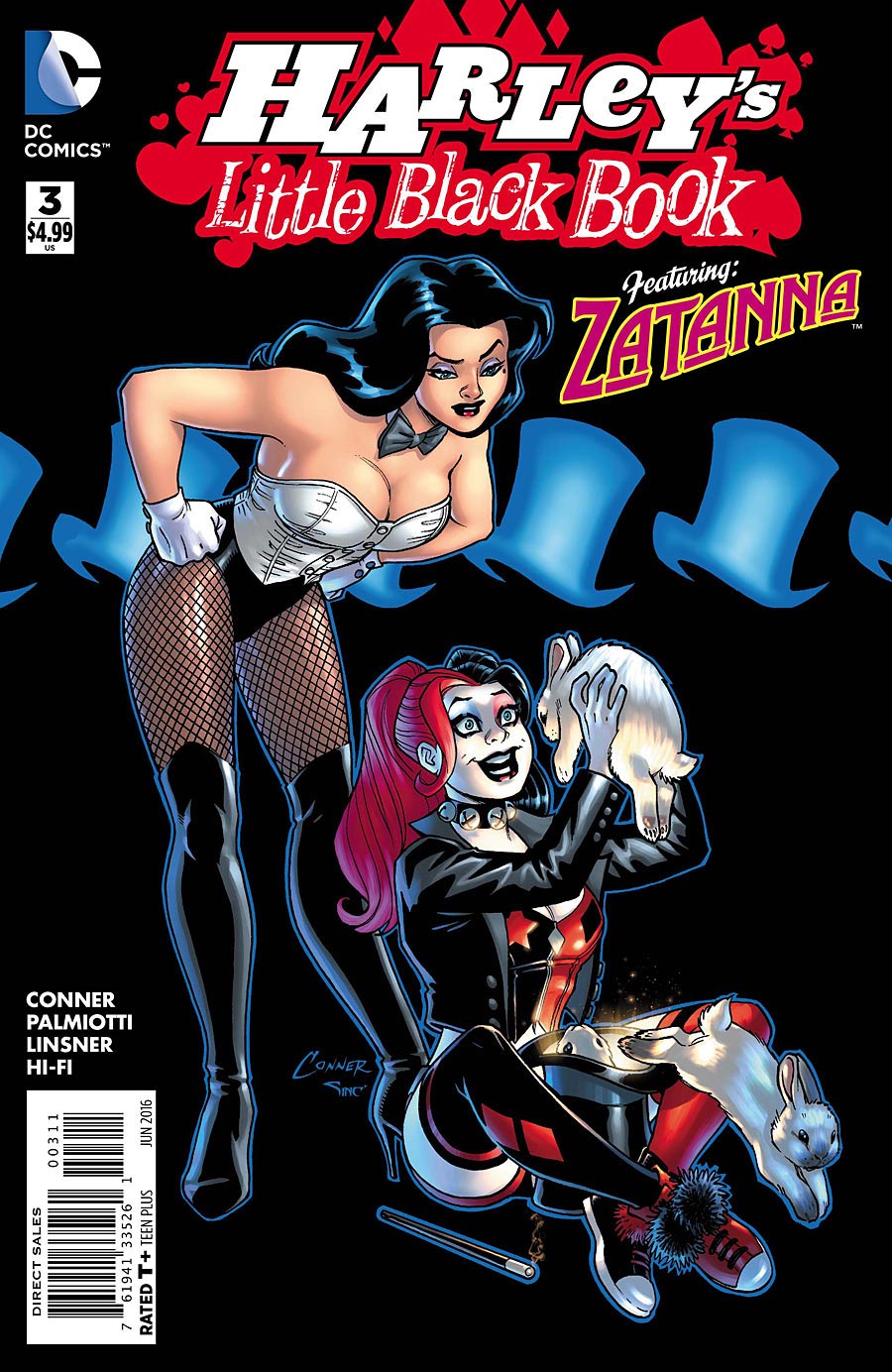 The latest of Harley’s team ups proves to be arguably the best one yet as Zatanna comes to Coney Island, resulting in the deepest exploration of Harley’s ties to sideshow culture yet.

The real killer app of Harley Quinn’s Little Black Book so far has been that the characters Harley teams up with in each issue have been carefully selected to do intensive character work on Harley rather than revel in the spectacle and novelty of a typically disposable beat ‘em up story.

At first blush, Wonder Woman, Hal Jordan, and Zatanna seemed like odd choices — and Diana in particular stood out as seeming potentially redundant with Harley’s relationship to Power Girl. Instead, the story reaffirmed Harley’s queerness and laid bare just how many of Harley’s adventures in the main title were stealthy riffs on the formula of those wacky Golden Age Wonder Woman comics with all the bondage and homoerotic subtext.

Zatanna’s role in this issue — beyond just being amazing, because let’s face it, she’s basically the best thing ever — is to really dig in and explore Coney Island with a specificity that the main title just plain hasn’t gotten around to. Conner and Palmiotti have, over twenty six and counting issues, painted a vivid portrait of their fun house mirror version of New York City as a whole.

Conducting a long form examination of the ways that gentrification has reshaped race and class within Brooklyn, the creative team poses her home on Coney Island for the most part as not much more than a backdrop. So the natural conclusion of how to rectify that is to bring out a hero with an attachment to sideshow and carnival culture just as intimate as Harley’s.

The basic setup for the story is about as classic “Harley Quinn” as you can get in the current volume. A historic ride is being shuttered and torn down because, you guessed it, gentrification! The oldest ride on the island is about to be torn down and replaced with a fast food chain, which is more or less true to the island’s sad decline and inability to hold out against the march of contemporary New York.

The wrinkle is that this particular ride is haunted by ghosts who will be hunted down by the minions of their murderer if they ever leave it, and so they strike out to find somewhere else to hide while they stave off the inevitable. The next oldest building, which, of course, is Harley’s.

Meanwhile, the housing situation at Casa De La Quinn is getting cozier than ever as the gang from England are forced to bunk with Harley when Big Tony reveals he’s booked a magician who needs the guest room. Because Big Tony never seems to tell anyone the most important information, Harley and Zatanna remain blissfully unaware that they’re under the same roof until the ghosts arrive, throwing everything into chaos. That is, until Zatanna can calm everyone down long enough to hear out their ectoplasmic visitors.

Thus begins a flashback to the heyday of the island and the tragic events that lead to their current plight, stitching together the highs and lows of its history and pulling together the influence that the real Coney Island and the culture it represents on the current comic. The villain of the piece, who ran a particularly demonic ride hiding his very real sorcery, is a phenomenal treat for sharp-eyed readers.

Thanks to Joseph Michael Linsner’s keen ability at likenesses, there’s a great laugh to be had at Jolly Straton’s very clear resemblance to Anton Lavey. Best known as the founder of the Church of Satan and the author of the Satanic Bible, Lavey was deeply influenced by sideshow culture and would have probably gotten a big kick out of the homage were he alive today.

Lavey literally ran away to join the circus as a teen and honed his musical skills by performing a calliope and eventually moved on to play the organ in burlesque houses. It’s a fantastic treat to see an homage to a real life figure whose early life was so deeply informed by the major influences that have gone into the title. Touches like this demonstrate the creative team aren’t simply tourists in a scene they know they can easily pander to. They know the ins and outs well enough to plant little Easter eggs to the relevant audience without pandering outright or becoming impenetrable to the casual reader.

Conversely, the biggest laugh of the issue is incredibly blunt. It comes when they discover that they have to go a few more rungs higher on the infernal ladder to sort the situation out, asking for the name of the demon they have to bargain with in order to free Straton from his curse, which in turn would liberate the ghosts of the sideshow performers. The demon’s name is Nad Oidid, and the payoff comes when Zatanna says it backwards in a spell to transport them to his domain. “Dan Didio.” There’s been a lot of ribbing of him throughout the series, but this one really takes the cake for novel execution, with the possible exception of the “Gnu 52” punchline in an early issue.

The bargain struck, over Zatanna’s protests, is that Harley will spend a month in Hell with the incredibly handsome demon who lives in an open air Turkish bath with other attractive naked people. Zatanna knows demons and of course this bacchanalia must be too good to be true, but Harley shoos her away before she can even blurt out a reminder not to eat any pomegranate seeds.

What Zatanna, nor the demon, bargained on was Harley being just as wily as John Constantine. As a result, she gets booted out less than a day later when the demon can’t take any more of her, possibly literally given the trailed off sentence she returns home in the middle of. The real payoff though is that she comes skidding out of Hell in an elaborate harlequin bondage costume with tears in her eyes mimicking Linsner’s Dawn character. There’s hints of parody aimed towards Linsner’s work peppered throughout the issue, but it seems to also extend to Jim Balent’s Tarot: Witch of the Black Rose in Harley’s use of the phrase “ghost beaver,” which may or may not be a winking reference to the infamous “haunted vagina” issue.

All in all it’s an energetic romp, but the true charm of the issue is in the details of the art and the individual interactions. A key part of the Little Black Book series has been the foregrounding of Harley’s sexuality and how it colors her interactions with each of her partners in crime. The Wonder Woman issue brought out the awe and admiration she has for Diana, but it also played heavily on her identity as a submissive. The Green Lantern issue provided a space to flip the gender norms of subject and object by presenting Hal as a blank slate for Harley to project her desires onto. This issue takes a different tack, and while Harley openly flirts with Zatanna as expected, the bulk of the conversations around sex have to do with navigating differing perspectives and comfort levels.

There’s long been an odd air of repression and hints of an Elektra complex in Zatanna that have lingered long after Grant Morrison and Ryan Sook collided with them head on in Seven Soldiers of Victory. But Conner, Palmiotti, and Linsner shave that sensibility down to Zatanna owning herself as a sexual being a couple shades less libertine than Harley’s full on Broad City.

The key to this dynamic is in Harley demanding time for a costume change before going off to hunt down Straton, leading Harley to ask if Zatanna wears her stage clothes to the hardware store. Zatanna replies that she does, and receives excellent customer service while doing so, prompting Harley to reply that she ought to try it while eating a banana. In Zatanna, Harley has finally found a foil who will rise to the occasion when she starts pushing buttons. In that sense, Zatanna is the least straight of the straight man pairings Harley’s been in, and you can take that however you want.

It’s an interesting dynamic to bring a well known pin-up artist like Linsner in for, and he isn’t called on to enact any of the diffusion or mitigation of sexualized bodies typical of Conner, Hardin, Timms, and several other Harley Quinn collaborators. It isn’t particularly called for either because the focus of Linsner’s figures isn’t in posing. It’s focused on volume and expression. The issue is book-ended by the pair sunbathing on the roof in swimwear coordinated to their costumes as one does, but what draws you in about them is the believably of their figures and the nuances of them. Zatanna’s cup size strains credulity to a point, but the overall emphasis is drawn to her face and small details like the hollow of her collarbone, rather than plunging cleavage.

Most surprisingly, it’s eyes that drive Linsner’s work the most, providing very specific emotional detail to expand the subtext of the dialogue and sometimes direct the reader’s own eyes across the page. Where it comes out the most, however, is in Zatanna and Harley’s interactions. Women don’t really spend a lot of time looking directly at each other in superhero comics, creating the sense of talking at each other instead of to each other. The reasons for that can vary wildly, but there’s a particular novelty to all of the different ways that Harley and Zatanna look at each other throughout the issue, creating a unique chemistry and sense of intimacy between them.

As usual, Harley Quinn’s Little Black Book is pretty much reserved for the most hardcore of the character’s fan base, but this one is peppered with so many little winks and nudges aimed directly at that audience that it truly maximizes its niche relative to the preceding issues.