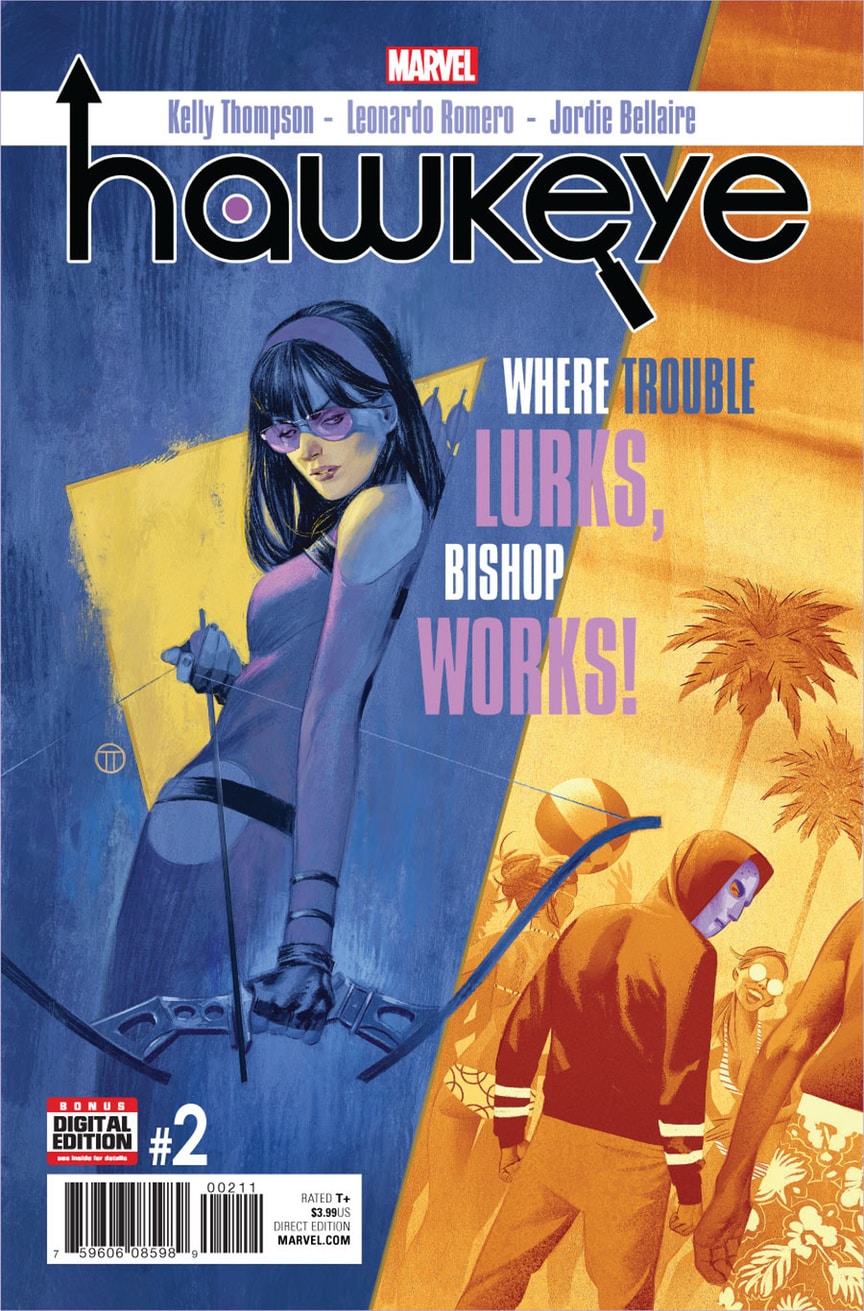 With her suspect in tow, Kate is getting to the bottom of the circumstances surrounding Mikka. After a frustrating meeting at the police station and giving assaulters a quivering feeling in more than one way, she finds a new break in the case, only to have to go on the run.

I’m more on the fence for this series than I expected, though its second issue puts us firmly in the throes of superhero detective work, giving a more firm voice for the comic’s direction. Kelly Thompson is having to write a legacy character who’s trying to establish her own life out of someone’s shadow, which is no easy feat. In this way, it makes sense that the story can feel a bit lost sometimes. There are some scenes which are cool, but that also seem out of place.

The scene with the attempted sexual assault helps us understand that Kate is not someone who will stand by when others are abused, though I wasn’t sure where it fit into the story besides introducing a potentially new secondary character. Given her history, I can see why it would be a helpful note in Kate’s solo life, but that wasn’t touched upon. One of the most important parts about this scene, regardless of its placement, is that Thompson highlights agency and choice in a traumatic situation, and that is absolutely vital for something involving sexual assault, so I cannot say enough how thankful I am for how Thompson approached it.

Leonardo Romero has a minimalistic style that helps separate the tone of Hawkeye from superheroics. The art grounds everything that happens, focusing instead on movement, surprise, and well-executed crowd scenes rather than minute details in people’s experiences. I like Romero’s touch because it allows the reader to fill in the blank regarding the atmosphere of the transpiring events by drawing attention to the environments around characters.

Jordie Bellaire puts a serious sheen on Hawkeye #2 that sets the tone for the series and for Kate’s new life as a “private investigator” (quotes for pending license). These colors match Kate’s shift to a new world and the challenge of figuring out not only the mystery of this first arc, but what she wants her life to be. Bellaire’s work also helps to create the detective vibe with muted colors and abounding darkness.

Kate is still my favorite, though I’m not quite sure about the story thus far. I think it’s a helpful direction that maybe needs some fine tuning in order to be fully realized. The art gets the feel right and the writing has enough mystery, but I think the story suffers from maybe including too many things and would better work under the principle of less is more. I think there’s potential in Hawkeye, especially moving into this issue, but it may need to find its voice sooner rather than later.