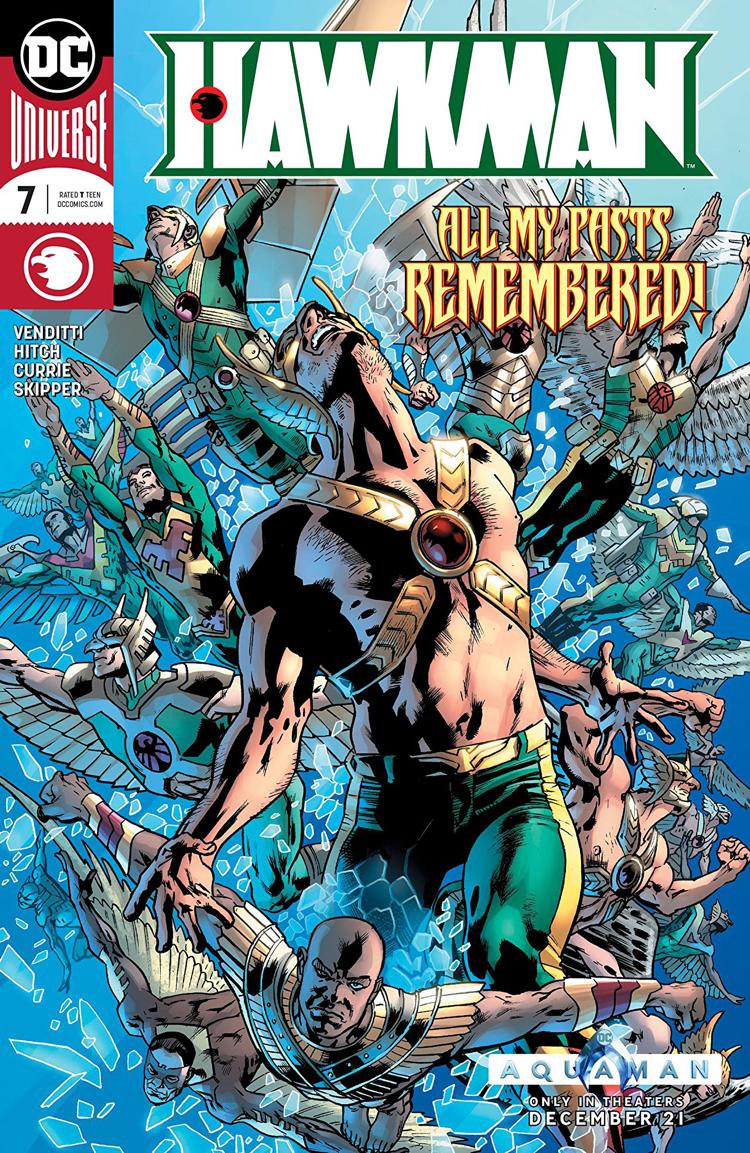 “You are in pain, warrior.”

Simply titled “Origin”, Hawkman #7 peeks back into the origins of Hawkman’s reincarnation situation as well as the source (of a sort) for the ominous Deathbringers that were introduced as a looming threat early on in this series.

Writer Robert Venditti, artist Bryan Hitch, inker Andrew Currie, colorist Jeremiah Skipper, and the crew at Comicraft reach way back before Khufu, Carter Hall, Katar Hol, and any and all variations thereof to tell a tale of a fall from grace. Or perhaps it is a fall into grace.

Venditti’s script is simple – it’s the tale of Ktar Deathbringer (a name driven by occupation), a warrior who lives up to his name, enslaving beings to become sacrificial offerings to a voice from the darkness. His quest to offer up hapless souls leads to slaughtering more who would defend the sacrifices, which opens up Ktar for some soul-searching.

Along the way, Venditti and his collaborators supply a new mystery introduced in the form of a redheaded woman who steps in at critical junctures in Ktar’s self-analysis. That analysis leads to a decision point. And here, Venditti takes that simple script and leads Ktar on a transformative journey that is deep and meaningful, not only to this series, but to every iteration of Hawkman.

Hawkman doesn’t don his helmet, nor does he swing his mace, but Venditti, Hitch, Currie, Skipper, and Comicraft pack this story with drama and suspense. The opening page of Hawkman #7 is filled with carrion hawks (think vultures) and Hitch cinematically transmutes the flock of scavenger birds to Ktar, and the camera pulls back to show readers that this all started on Thanagar.

Hitch masterfully delivers everything –from the sprawling battlefield stacked with deceased warriors to the glowing mysterious monolith of the “Lord Beyond the Void” demanding tributes from Ktar and his lieutenant, Idamm, to the struggle between both winged warriors – with rich detail, but a lived-in level of grit. It’s the same type of grit the original Star Wars film brought to the screen, and given the focus of this tale is one of warriors slaughtering their foes, the grit is directly on target. That grit is the same type of rough-hewn appearance Joe Kubert brought to his drawings, which, if you’re any sort of Hawkfan, you know is a good, good thing when it comes to Hawkman stories.

The climates over the various battlefields in Hawkman #7 also play to Hitch’s strengths, allowing him to choose what is there, rather than requiring a certain setting, but those climates also elicit darkness on a level equivalent with Tom Mandrake, which clicks in nicely with the mission Ktar is sent on following his change of heart. Keeping it spoiler-free, I won’t say how, but if you’re familiar with Mandrake’s work, you’ll understand.

Skipper’s colors tend to be muted and duller than standard, which really works for the quest for redemption in Hawkman #7. The muted colors compliment Hitch’s and Currie’s inks, drawing darkness and shadow from the inks into the action of it all.

It is not explicitly told to us where Ktar Deathbringer came from, but his moment of enlightenment in Hawkman #7 leads into the story of resurrection that has since become the backbone of Hawkman’s existence. He has lifetimes of redemption to slog through, which we’ve started to see (well, we’ve been seeing it for a while) and will certainly shade the proceedings of the series going forward. Venditti does a great job of choosing his battles to fight and the threads of history to investigate, giving readers a wonderful adventure to follow along the way. We’re there from the beginning of the reincarnation cycle and we have an idea of why. That makes Hawkman #7 critical turning point in this volume of Hawkman and perhaps even a Rosetta Stone of sorts for the character throughout his almost-eighty years of published existence.