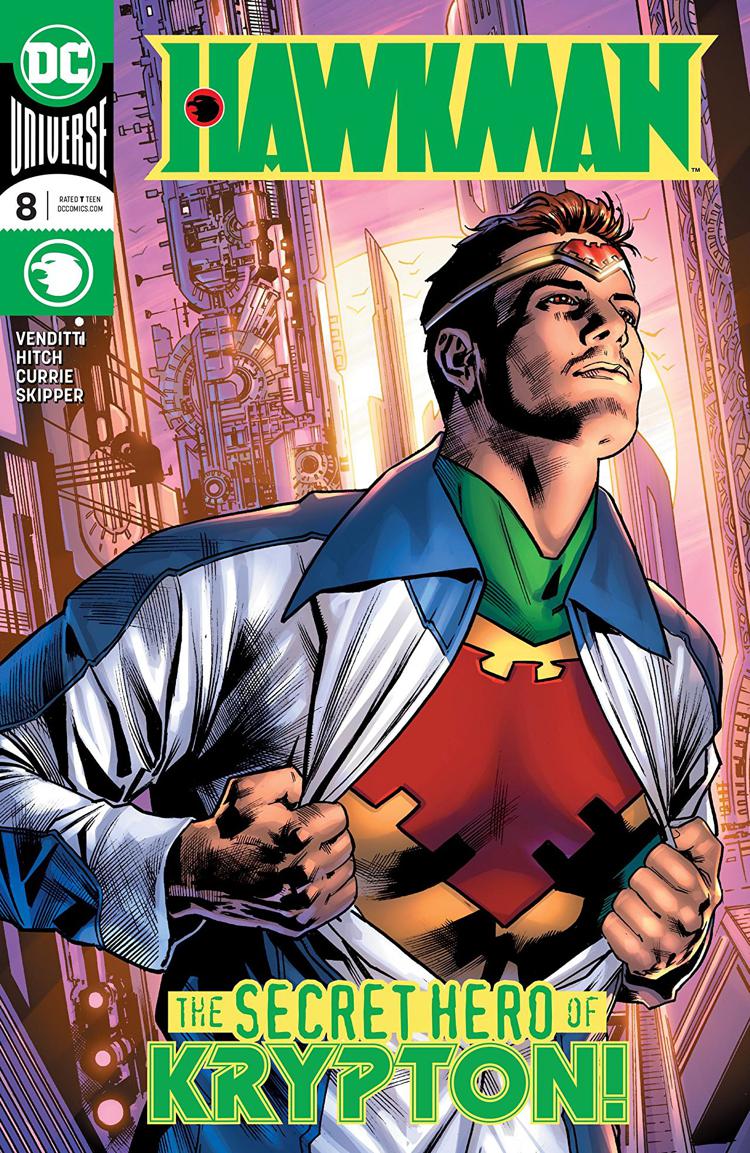 Hawkman’s quest to uncover his past and atone for his sins leads him to the ruins of Krypton and an encounter with the long-dead Kryptonian Hawkman, Catar-Ol.

Hawkman arrives at the ruins of Krypton only to once again find himself drawn across time into an encounter with one of hit past incarnations. He brings Catar-Ol up-to-speed on what he knows of his past as a Deathbringer, the genocidal servants of a death-fueled hawk god. Catar, meanwhile, tells Carter of his planned anti-Deathbringer superweapon that, thanks to the destruction of Krypton, was never to be.

The Venditti/Hitch Hawkman run has quietly been one of the best superhero epics on the shelves since it started publishing. It’s found a way to make Carter Hall a compelling hero in the Twenty-First Century by making him a kind of Indiana Jones-style globe-trotting adventurer, while also having him explore a backstory that is both familiar and amenable to new readers. The creators have somehow managed to take a famously snarled history and both simplify it, by fitting it into a larger framework of death-and-reincarnation, and add to it, by placing it in a larger context that explains Hawkman’s reason for reincarnating and adds new incarnations of Hawkman, heretofore unseen.

It does all of this while being genuinely entertaining. Each issue features big, widescreen action while advancing the underlying plot in compelling ways, moving Carter from one adventure to the next at a brisk pace. And Hitch’s art is stunning; his attention to anatomy, his dynamic posing, and his detailed background work is reminiscent of Joe Kubert’s best. His style is exceptionally well-suited to this character and this story, with its grand galaxy-spanning adventure, really lets him stretch his wings and show his talent for a wide variety of settings and contexts.

The focus of Hawkman #8 is an encounter between Carter Hall and Catar-Ol, the Hawkman of Krypton, as the planet explodes around them. For once, there’s not a fight between the currenct Carter and his past self. Catar-Ol knows about his nature, and was expecting a visitor, so most of the comic is a conversation. It’s a fascinating meditation on mortality, within the context of an immortal, reincarnating character. Catar-Ol knows the Deathbringers are coming, he knows he has to do something to stop them, but he also know he hasn’t the time to do it himself. So he tries to build an Nth Metal weapon that will destroy them, but even these plans are cut short as the world around him is literally destroyed while his weapon remains in the planning stages. It’s a fascinating metaphor for the grandiose plans we make and watch slip away as our time alive is so fleeting.

Hawkman #8 is a joy to read, and a sterling example of how continuity can be integrated into a superhero comic without making it intimidating and repellan to new readers. The art is top-notch, and the ongoing story captivating.