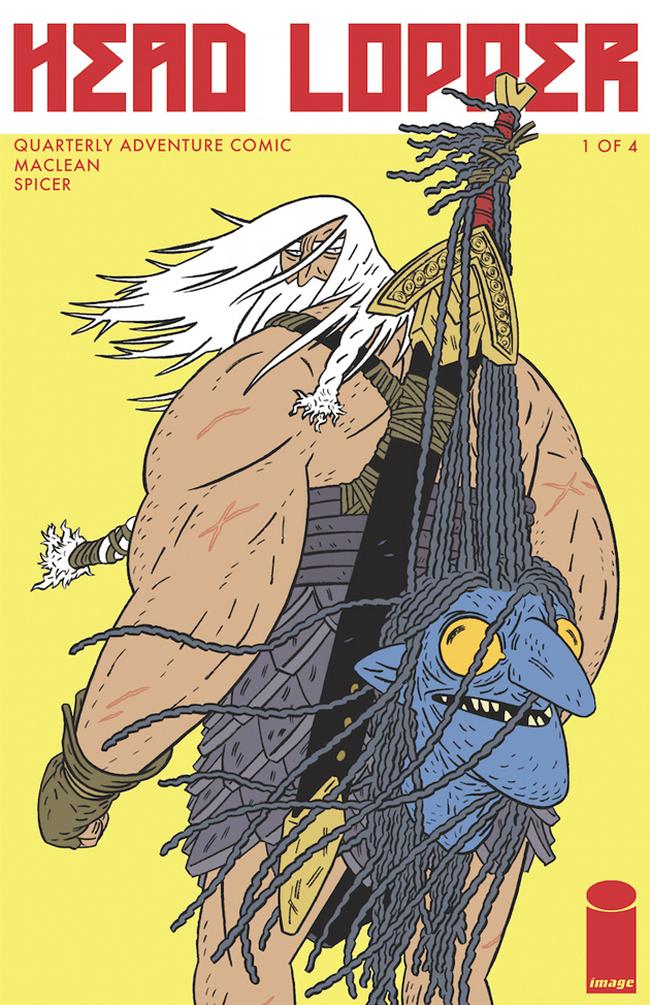 Meet Norgal. He’s your average gigantic viking-clad gentleman. Carries around a blue witch head. Likes long walks on the beach. Enjoys severing heads of extremely large beasts. You know, the usual. Head Lopper #1, by Andrew MacLean of ApocalyptiGirl fame, is anything but usual, however. This is a new quarterly series from the writer/artist, clocking in at over 80 pages of full-blown adventure fun. This first issue is bolstered by stories already released, but readers, new and old, should check out how seamlessly these stories run together in this massive installment.

Head Lopper is relatively simple in its premise: Norgal the Head Lopper is going all around Barra chopping the heads of gigantic mythical creatures. He interacts with some royalty, makes a holy man angry, and acquires the affection and idolization of a young boy. All that while carrying around the decapitated head of Agatha the witch. Norgal lops the heads off some incredible enemies in this book, showing just how imaginative MacLean is.

So far, the characters feel fleshed out nicely for the adventures to come. Though much of this issue (and I imagine the rest of the series) is pure action fun, filled with slicing and dicing and heads going everywhere, the plot feels layered within characters and their emotions and motivations. At first glance, this seems like it would just be another sweaty-chested beast-man story, but this is so far from that. MacLean has given readers a lot to think about with Norgal, a character that, while quiet through most of the story, clearly has an incredible back story and even more exciting future. The dialogue between the characters is quick and fun, and MacLean has done well to find a unique voice for each member of the diverse cast.

MacLean has a wonderful art style, one that I celebrated with ApocalyptiGirl. His character designs are overblown and glorious and his ability to depict some of the most bizarre action is appreciated. He makes it easy for eyes to dance around the page and enjoy every flick of Norgal’s sword, smiling stupidly when the next crazy beast makes it way into the story. This is a long first issue, with three stories within, but the ease of the action makes it a quick and fun read, ready to be read again immediately. This is an extremely vibrant book, the bright colors keep the energy high and the tone set just right throughout the story. The blends are smooth and the palette suits the book’s adventurous mood.

Though the price tag is a little higher on this book ($5.99), keep in mind that this is close to three issues worth of material. As a quarterly, this book will be one to keep an eye out for. I, for one, know that the next installment can’t come soon enough. Head Lopper is a glorious visual buffet, filled to the brim with crazy action and intriguing characters.