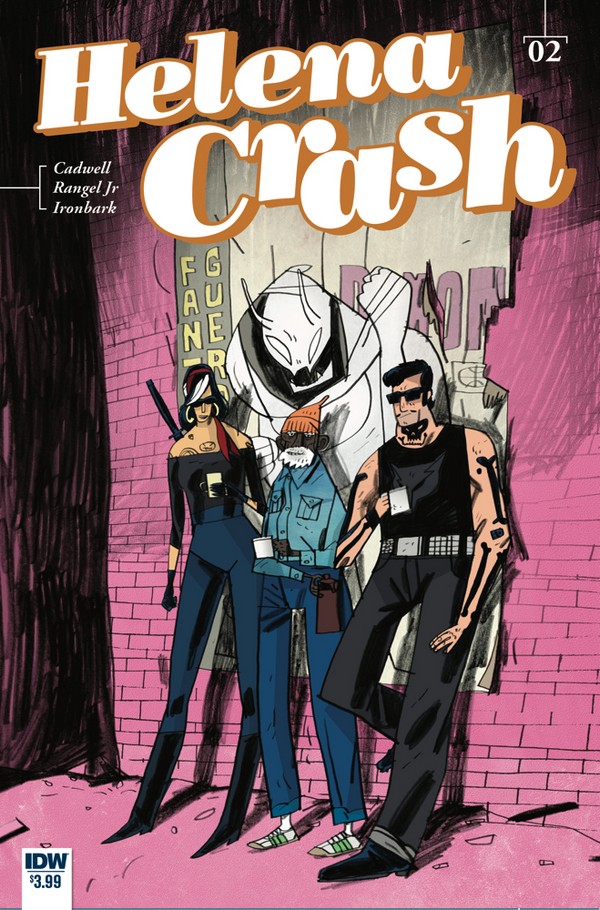 Helena Crash lives her life on the edge as a courier of goods to the most dangerous people in town. In a city run by crime bosses, it’s hard to live a neutral life, as she finds out in this exciting issue of Helena Crash!

Rangel has created a world I want to explore more. I love how certain objects are banned due to climate change. I love the cast of colorful characters that Rangel has created. The people, from fantastical to alien, are all interesting and make me want to know more about them. The backstory to the White Demon is intriguing and makes me hope for a little backstory on the other major crime boss in the city, Rojo.

My favorite is definitely Helena, though. She’s probably the coolest person ever, drinking coffee, speeding down streets, and taking names with her katana Lisa. She always feels in control of the situation, even when impromptu fights pop up, and it’s awesome to see someone so coolheaded as they’re thrown into problematic positions. I look forward to reading even more about her.

Johnson-Cadwell’s art is distinct. It stands out amongst all the comics I’ve been reading, and that’s what makes it special. He brings character to the style, one that only a few can. His designs for every character I’ve seen, whether they be werewolf or talking gorilla, are magnificent. The tiny touches he adds to characters, like the skeleton tattoos on El Lobo of the King Kong jumper the giant gorilla wears, really add to the whole feelings of those characters, make them more interesting.

The architecture displayed in the backgrounds is beautiful as well, especially the building where the White Demon resides as well as the buildings surround the White Demon’s base. I love the touches he brings to the insides of places, like the intricate thrown the White Demon sits on or the flurry of magazines in Helena’s home. Those kinds of touches add atmosphere to the world.