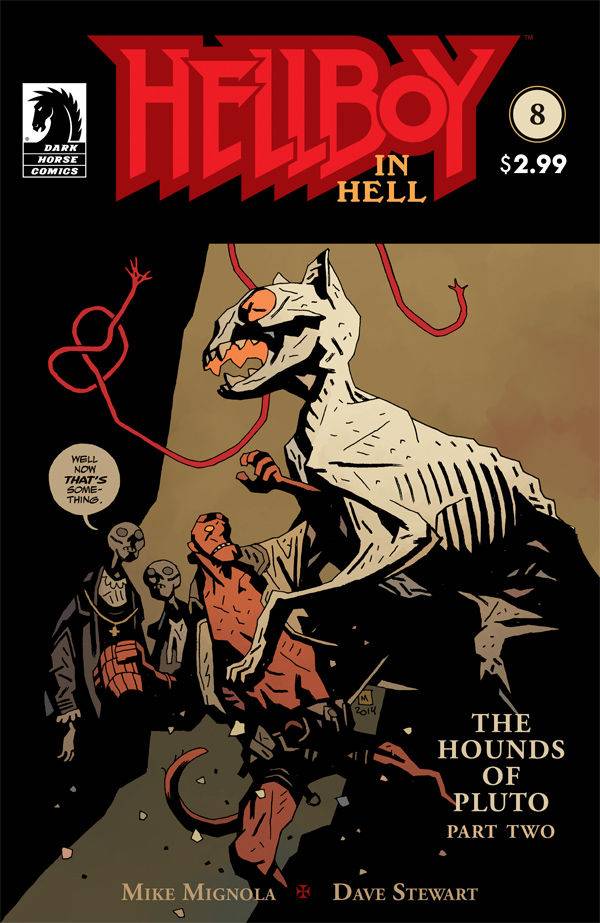 The finale of this two part story is here and Mike Mignola has all his storytelling muscles flexing. This Hellboy tale is engrossing, dark and everything I expect from a Hellboy comic where Mignola is at the helm. His artwork tells so much story throughout this issue, and when the master is at the helm of this character, good things happen.

As has been the case with the entire Hellboy In Hell series this far, the entirety of the events in this issue can feel like a massive riddle. Statements are half made, characters speak in code, and at points I freely admit some of what was occurring vexed me completely, but Mignola’s artwork sucked me in so deeply I couldn’t pull myself away. Hellboy and his quest to save the world are completely unique in comics and Mignola’s work on this issue is exemplary. The way Mignola weaves early events of the In Hell series through this 2 issue tale is brilliant and with each page things become simultaneously more confusing and enlightening. This is a difficult thing to convey fully because I’ve read next to no comics like this, and I mean that fully as a compliment. There are few that can blend an adventure through Hell with one liners like only Hellboy can deliver and pull it off properly.

Dave Stewart’s colour work is the perfect compliment to Mignola’s pencils. Their combined style is easy on the eyes while also jarring at points, and Hellboy In Hell #8 is one damn good looking comic. The shadow and colour work in this issue is exceptional, and the tone set by Stewart’s work compliments this eerie and odd tale brilliantly.

Mignola and Stewart are a great 1-2 punch, and Hellboy In Hell #8 is a rock solid comic. The saga of Hellboy continues to move in interesting directions and entertain me wildly. Mignola is a masterful storyteller and, even though there may be a wait, I’ll be waiting with open arms for it.