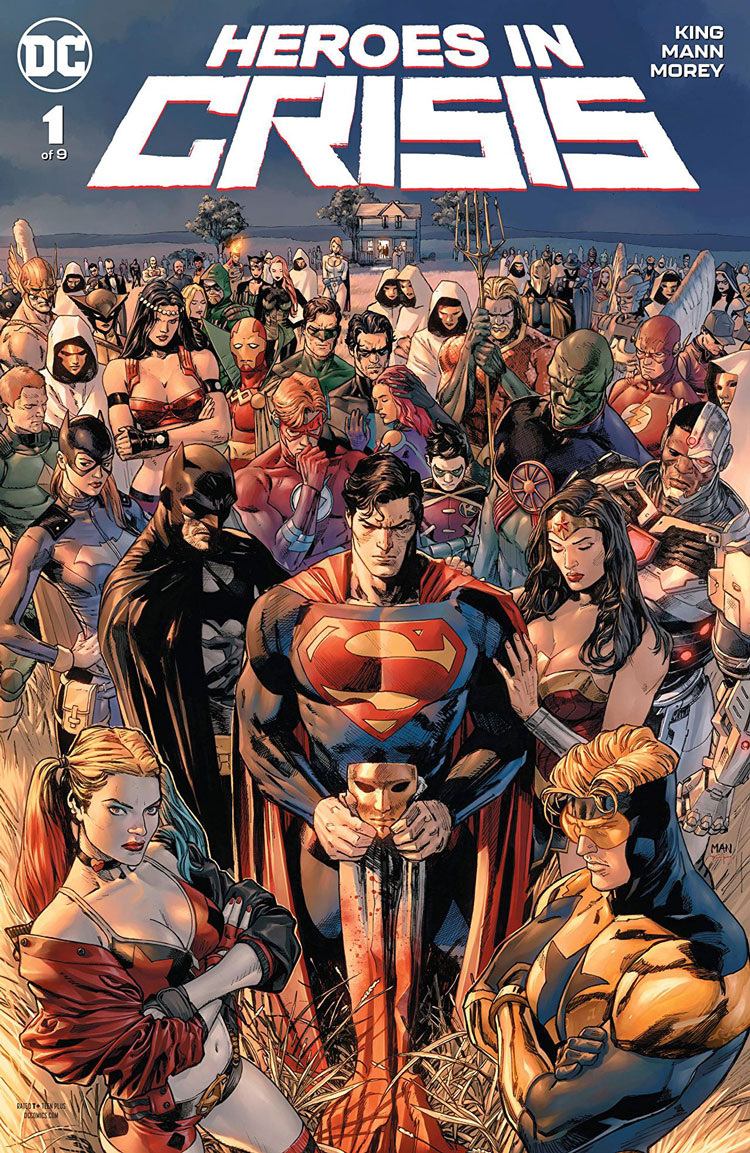 A murder mystery begins. Heroes are slaughtered. Superman, Batman, and Wonder Woman are left to investigate. And two of the unlikeliest suspects are on the run, each believing the other is responsible.

It’s an incredibly great set-up for a comic, reminiscent — as many have pointed out — of the initial delivery of Identity Crisis #1, the herald for what ended up being 4 of my favorite years in comics collecting since I was 12 years old.

It is a great set-up in concept. More’s the pity that the execution completely falls short of the target.

An incident that could easily have been the most devastating moment in the history of the DC Universes for its super-powered inhabitants is portrayed instead as an empty, emotionless massacre, seen through deadened eyes and complete dispassion. It’s a genuine surprise, to be honest, because no matter how skeptical I had become given the rumors of the cannon fodder herein that have been floating around the last few weeks, I honestly believed that I would be moved by the story.

Mister Miracle, also by scribe Tom King, is an exceptional work, dealing in many of the same overarching traumas that Heroes in Crisis purports to touch upon. That book is, without question in my mind, a genius work — and so moving that I have even described parts to my therapist in detail. But everything that makes Mister Miracle work, from pacing to dialogue to robust expression and emotional outburst, is completely absent from this reportedly touchstone book for the psychological health of the DCU.

It doesn’t help that Clay Mann is at the helm for artistic vision, given his often cold, mechanical execution of line and shape. Even his attempts at lurid upskirting in his Poison Ivy mini-series a few years back, while completely disruptive of the written narrative, still didn’t capture more than the feeling of a cold stare for me.

Every character throughout the issue, dead or alive, feel stoic to the point of statuesque, which functions beautifully in pin-up form, but not so much in terms of dramatic narrative. Wonder Woman, one of the most compassionate characters in the DCU, expresses little more than a mild eyebrow raise at the sight of one of her oldest friends lying dead on the ground. In truth, the only character to express much of any emotion is Harley Quinn, which is kind of an exaggerated cheat. Portraying psychotic violence, it seems, is a whole lot easier than fear, sadness, regret, anger, or pretty much any other emotion — none of which even glimmer across a character in this issue.

But in truth, it doesn’t feel like King has given Mann much to work with. The emptiness of the narrative, decompressed to excess even by modern standards, just leaves so little to portray. The full page spreads are relegated to a) a cornfield (?), and b) the revelation of dead bodies, mostly envisioned through Superman’s telescopic vision. Neither the hero nor the reader are allowed to get too close.

And herein lies the main problem with Heroes in Crisis. I don’t feel the crisis. At all. The death of a handful of random also-rans aside (apologies to those who love Hotspot, Bluejay, Citizen Steel, or Lagoon Boy — every character is indeed someone’s favorite), two major heroes of the DC Universe are slaughtered (one of my favorites, in fact), and I can barely yawn. And it’s not from jaded experience or an expectation of rebirth. It’s because the presentation of their death is so empty and pointless that I can barely ruffle enough interest up to care. There’s no more emotional connection to the dead heroes (with decades of stories behind them) laying there than there is to the destroyed nameless robots in the same position.

I can’t be angry. I can’t be sad. There’s no room in these pages for anything beyond a shoulder shrug. Because there’s no sense that any emotion is meant to be conveyed beyond such. Compare that to the wail of a widowed Ralph Dibny from Identity Crisis #1 that still haunts me to this day, and profound disappointment sets in.

Don’t get me wrong. Heroes in Crisis #1 isn’t a gimmicky comic. It doesn’t feel exploitative. It’s far worse than that. It’s left me with utter indifference. And I don’t imagine that was the goal for DC’s next blockbuster event.