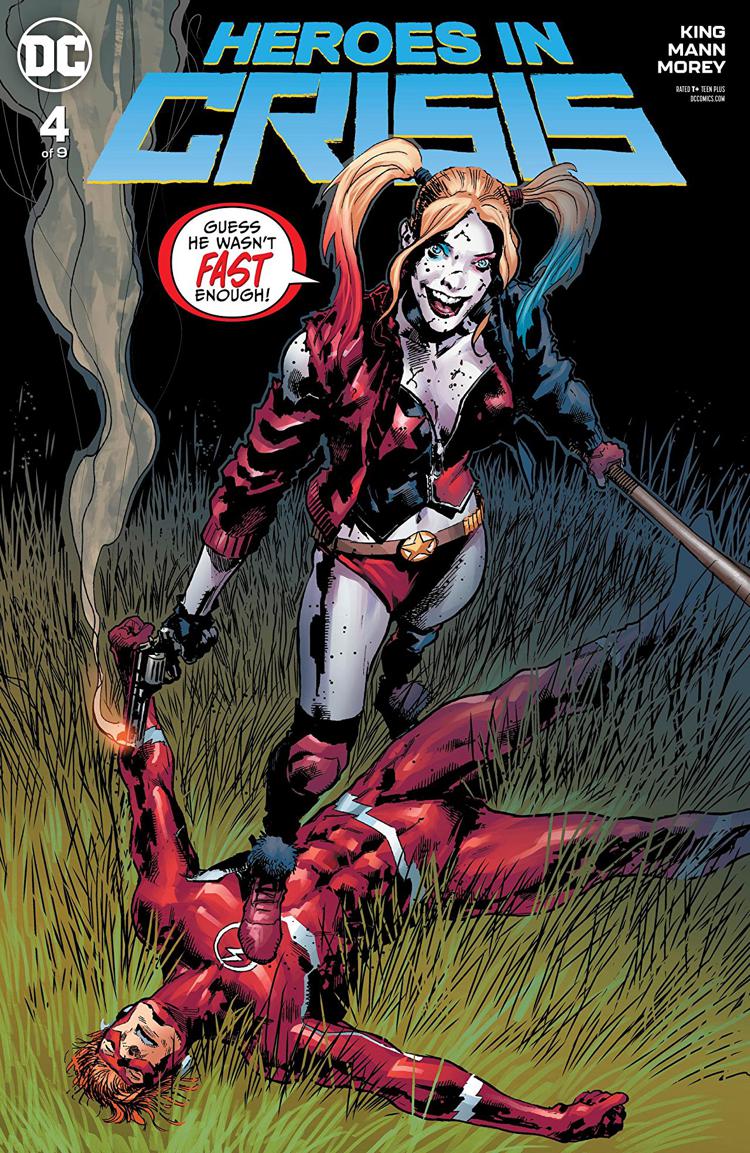 Having previously written one piece on the issue surrounding Poison Ivy and then another issue about the flaws I saw with Heroes in Crisis, one question might pop up as you read this: given my feelings for this comic, why would I want to review Heroes in Crisis Issue #3? In truth it is because I want to figure out what this comic is going to look like from start to finish. I think, sometimes, it can be easy to reject or hate a series because of a piece or issue taken out of context. This in no way means a ‘completed run’ can excuse early cracks in a story’s foundation, but it is still something I want to undertake, where possible. This issue is an attempt to try and see what does work and what does not about this link in the narrative.

While there are some things that genuinely work with this comic, most of it is still things which range from just ‘bad’ or ‘highly out of character.’ For the sake of what it might be worth, what does work?

The Good: This issue focuses on establishing two teams, that of Booster/Blue Beetle and Bat-Girl/Harley. These moments are the focus of the humanity these characters have, for the large part, been missing. While there is, to this reviewer, something a little off about Harley only having mentioned Ivy in the brief reference she did back in Issue #2, Bat-Girl and Harley do have a relationship of sorts. Barbara trying to get to Harley before Bruce makes for a believable avenue for the connection, but it’s the conversation they have together which is what has been sorely missing from this whole comic thus far. Why didn’t any other character make this move towards compassion, considering what has been going on?

Booster and Ted’s reunion is another great aspect of the comic because, genuinely, King cannot write Booster on his own. Including Ted into the equation is something that I think would benefit both Booster’s role in the story, as well as adding a more focused dynamic for the pair, i.e.: solving the Sanctuary mystery.

The art is also especially beautiful and deserves special focus here. While Clay Mann’s work has always been noted for its beauty, this issue seems to serve as a model for some of his best work in a long time. From the beauty of Harley and Barbara embracing to Green Arrow looking out over the sea at sunset, Mann is clearly both inspired and firing on all cylinders.

The Bad: Unfortunately, the narrative illustrates some flaws that King feels are worth tackling, but they raise more questions in turn than they answer. For example, King presents a sequence where Booster undergoes something which should definitively verify his guilt or innocence … yet it goes nowhere. Wonder Woman even directly asks a question about Booster’s choice of armaments, which itself forces speculation about how powerful Harley and her hammer are expected to be. Then there is Booster and Batman’s shared assessment of the crime scene, which is meant to highlight their difference in perspective, but the moment does nothing more than that.

The Out-Of-Character: There is a moment, towards the end of the comic, which I believe is probably the most out of character thing I can recall in the past few years of comics. I have no earthly idea why one character is selected to deliver the penultimate ‘twist’ of the issue, but that choice appears undamentaly wrong for a few reasons. First, the character used seems like they would never do what is done when the action taken is … well, what it is. Second, the presentation of the reveal to the twist is a terrible mirror of another famous comic panel. Aligning the character used for the twist with the infamous villain from the famous comic paralleled (I know, the spoilers are not helping me make this case as well as I want, but believe me: this is a weird and awful choice in a comic that doesn’t need any more issues) is in about as much bad taste as I can imagine.

For all the progress on the emotional front, issues involving technicalities of the plot and a particularly bad character ‘twist’ means that Heroes in Crisis is, itself, still a comic in a crisis.