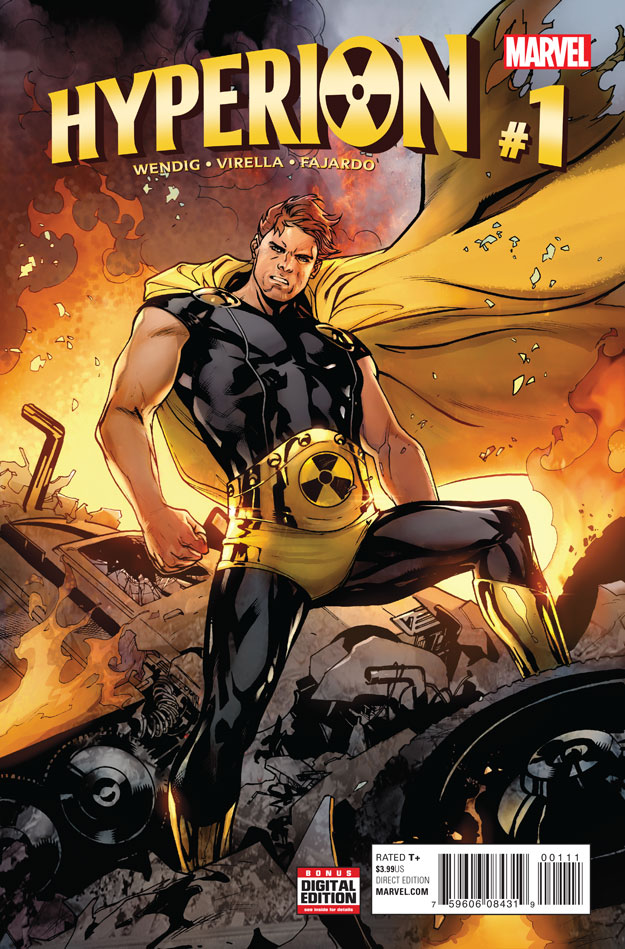 I’m sure it’s no coincidence that Marvel’s Superman analog makes his solo series debut just as the Distinguished Competition’s Man of Steel returns to the silver screen. Striking a heroic pose on the cover of Hyperion #1, however, is the closest similarity those two characters will share at this point.

Written by Chuck Wendig and drawn by Nik Virella, Hyperion #1 takes the superhuman alien from another world out of the setting of Squadron Supreme and puts him in the driver’s seat of a big rig rollin’ down the highway. Marc Milton is taking some time away from his Squadron teammates to figure some things out, and driving a semi appears to be giving him plenty of thinking time. Until he happens across a runaway named Doll. As Hyperion #1 rolls on, readers learn who Doll is running from, through which we also get a vague sense of the why.

Wendig does not, however, provide any sort of explanation as to how Doll’s path is set for the intersection with Hyperion’s. The two meet in the course of this issue, which leads trouble, setting Wendig up to give readers an introduction to Hyperion’s powers. As for the characterization of Hyperion, Wendig only gives outline notes – bits of attitude and identity, but for the most part, Hyperion fights that identity, insisting that he is Marc Milton. Wendig compounds that by further distancing Hyperion from the rest of the Marvel Universe in his introduction of a whole new band of foes that are vaguely analogous of (or at least a shadowy substitute for) the Circus of Crime.

Virella’s work is on the mark for this story (which is not unlike the notion behind the Superman “Grounded” tale), in that it is sketchy and raw. In Hyperion #1, however, the big wow of the issue falls into too much shadow to really escalate the excitement readers should feel for that final splash page image. There’s still shadowy darkness indicative of mystery, when there should be some brightness and illumination. The issue’s quest is addressed, but it isn’t celebrated visually. Drawn by Emanuela Lupacchino, both the cover of this issue and the cover tease for next issue find the essence of Hyperion and broadcast that nicely. Gold and black make for great contrast in print, and hopefully the murkiness of this issue’s visuals for Hyperion are simply attributable to growing pains.

Virella does a great job accentuating the mystery in Hyperion #1 and grounding the artwork to match Wendig’s story. Choosing to sideline Hyperion through most of the issue and then setting a crew of carnival freaks after him seems like an odd choice for a Superman-level character, not unlike the proverbial lamp under a basket, but this is all setting construction and plot exposition at this point. Unfortunately, with the sheer amount of product on comic book shelves, a comic featuring a bold, strong hero should have some bold, strong heroics as its signature.

Hyperion #1 doesn’t closely align with James Robinson’s Squadron Supreme, but it also does nothing to contradict it. I expected a spinoff to be a little tighter to the mother title, but that’s just not the case. That said, there are good things present in Hyperion #1, like Virella and colorist Romulo Fajardo’s collaboration on the more mundane aspects of the tale, Virella’s drawings in Doll’s dream sequence, and the unpredictability of the tale itself. Unfortunately, Hyperion #1 needs a little more Hyperion in order to keep readers hooked in. I’ll give it another couple issues to hook me, just based on my enjoyment of Squadron Supreme, but Wendig and crew are really going to have to wow me in those issues.