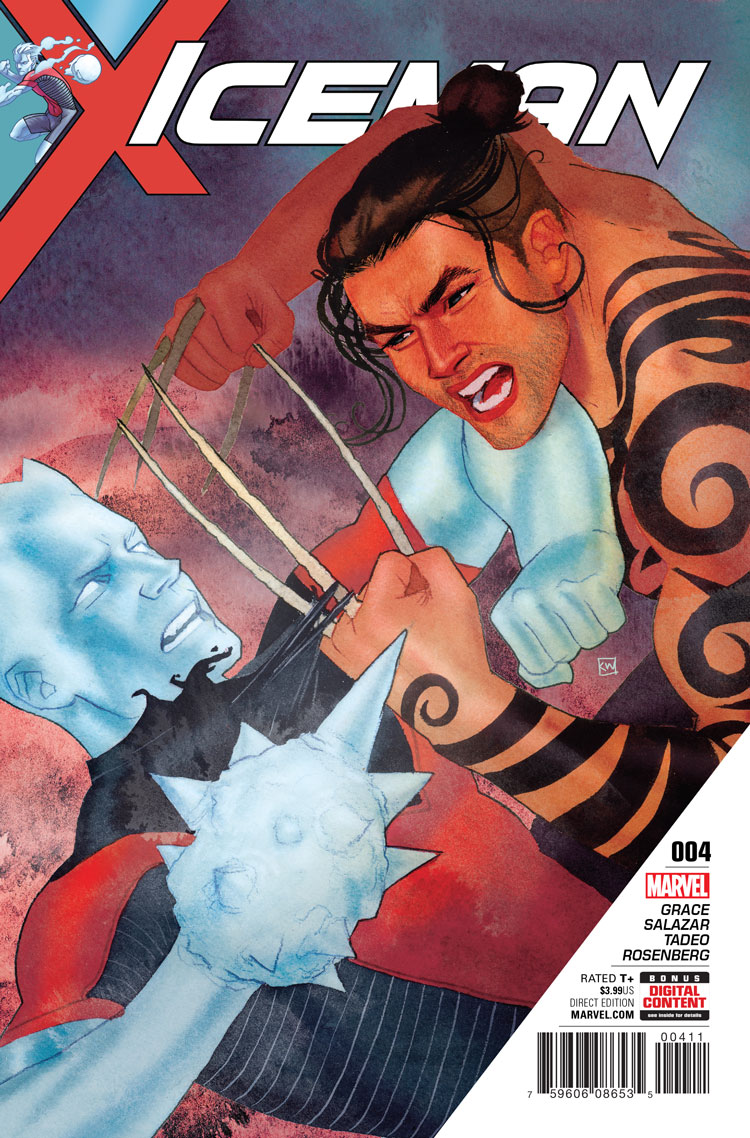 The path of least resistance.

Zach, the young mutant Bobby and Kitty rescued in their last adventure, has gone missing. As the adults search for him, the kids of the Institute show that they’re the real MVPs by giving one of the best clues for tracking someone: social media. Bobby makes his way to Zach and finds Daken in the path.

Try as he might, Bobby can’t quite make things right, another level of frustration for him to manage as his parents make a surprise appearance and he gives them some surprising news.

Iceman #4 is the best issue of the series so far, but it does still have some rather odd beats. Most of the story makes sense and the progression works better in this chapter than I’ve seen before. Each plot point follows the next in a manner which feels appropriate and less out of the blue, until a rather surprising ending which I’ll discuss further.

I pointed out an issue with the use of African American Vernacular English in my review of the second issue of the series and that comes up again, though with less racial undertones. Words like “bougie,” “YOLO,” and “swagger” are sprinkled throughout the issue, leading me to a couple of conclusions. Either they don’t really work at all or maybe they don’t work coming from Bobby.

Daken and Zach use other modern slang, not quite AAVE, in a manner which feels much more convincing. From our protagonist, though, “hip” language feels forced. To this point, I feel we get some quality Bobby moments when he’s being thoughtful, and he spends much more time doling out emotionally deep monologues, a welcome change from what we’ve seen in the previous issues.

Sina Grace is still finding his groove when writing Bobby Drake, evidenced in the changes in characterization and storytelling. For a significant portion of the issue, we really do get to explore Bobby’s motivations and complexes, some through him directly and others through Daken’s words toward the end of the issue. There are some gems in this story that I wish we could see more of because right now they feel more like diamonds in the rough.

I am still not quite grasping what Grace wants to do with the series. The overall story is excellent, but moments in the immediate first and last pages add a sense of clutter. Kitty mentions something that isn’t quite cool, though was easier to let slide than her previous appearance.

Bobby’s coming out in the final page of the comic was as much of a whirlwind change as his parents’ appearance, who still continually confuse me. I can see where this development stems from, but in its execution it fails to capture the drama, tension, frustration, and other emotions Bobby has expressed. For something that should be monumental, it ends up falling flat and feeling as though it had no basis in the story.

Edgar Salazar has some points to address in art while also adding glamour to pencils. The scenes inside Greenwich Mean Time are wonderfully portrayed. People’s clothes, their dancing, have an excellent rendering within the story. As Daken and Bobby begin to fight, I feel like we get more of Salazar as a total package. It’s in these places where emotions are on point and movement is easy to track and understand. Compared to moments like the last page, which was oddly devoid of emotion, Salazar seems to excel with action and wide shots with a lot of bodies.

Ed Tadeo’s inks are light through most of the issue and this technique works to some degree. Softer images are important in the story and enhance the opening pages and the build-up in the Greenwich Mean Time scenes. Other places Tadeo isn’t meshing with the story by using less weight in lines.

Still, I appreciate that Tadeo put a significant about of boldness into the concluding page. Even if Bobby’s emotions don’t fully register in the context of the impact of the page, Tadeo’s work helps to better flesh out the importance of Bobby’s disclosure.

Through the series so far, Rachelle Rosenberg has added a slice-of-life touch to Bobby’s world. Colors aren’t too flashy or vivid and the character remains an eye-catching element of each panel when he is using his powers. Rosenberg continues to create an emotional grounding that helps keep Bobby’s story close to ours, at least on a visual level. I can appreciate that the emotions conveyed need to be and do reflect that at the end of the day, he is still dealing with real-life conflicts.

Just like Bobby is sorting out his place in the world, so is this series. Various moving parts are beginning to coalesce in a way that more enjoyable and provocative aspects of the story can emerge. Bobby thinks and listens more, he explores more, and that’s valuable to his narrative.

Yet, there is still something missing from Iceman in the sense of direction and its future, marked significantly by breakneck developments. This series may just need more time to find a firm footing, but it seems as though that is becoming a much bigger challenge than I expected.