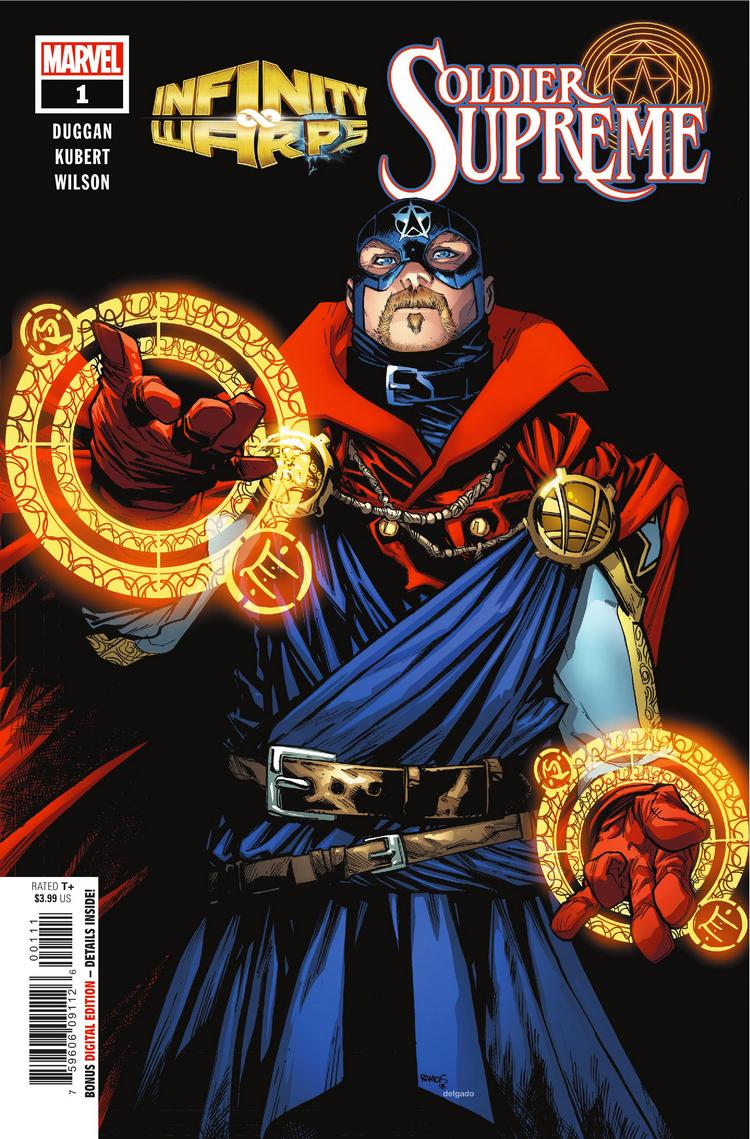 Reality in the Marvel U is fucked, but that can be a lot of fun! Get ready for some mash-up madness starting with the Soldier Supreme!

The WWII origin story we all know gets a magical twist as Steve Rogers and Stephen Strange become one. These kinds of stories are just a riot. In a similar vein to the fun that is What If? or the beloved (terrible) Amalgam books of my youth, reading a beaten-to-death origin unfold in a different way is just plain fun. Duggan is obviously having fun with this issue, tweaking and changing things here and there to maintain the core thrust of Captain America’s origin, but modifying it wherever possible with flares of magic. These characters make a surprising amount of sense together, and the result is a cohesive story that entertained me greatly. The support characters merge the two worlds well and Duggan makes the sorcerer element viable in WWII quite nicely. The dialogue is snappy, things move at a good clip and the story leaves on a note that intrigued me greatly. For an alt-reality story that will only be two issues, you can’t ask for much more from the narrative of issue #1.

Bless editorial for giving this fun Infinity Wars tie-in the all-star treatment, because I don’t think you can go wrong with a roster of Adam Kubert, Matthew Wilson and Clayton Cowles. Seriously, this issue is a visual feast and, from start to finish, I was gorging on beautiful art. Kubert’s pencils capture the sensibilities of both Rogers and Strange, while having some fun with their traits along the way. Kubert’s pencils elevate Duggan’s playful tone at all the right points, while giving readers some good ol’ fashioned superhero action when it is needed as well. I’m a long time fan of Kubert’s work, and he does not disappoint here. Matt Wilson’s colour work is phenomenal, and I’m truly not sure this guy can drop the ball. His work is always on point and there are characters in this comic that explode from the page because of Wilson’s work. Cowles’ steady hand rounds everything out and his lettering choices throughout the issue really drove home the Strange aspects of this character.

Infinity Wars: Soldier Supreme #1 is a fun romp in the “What If?” situation Gamora has caused in the main Infinity Wars book. This tie-in throws two unlikely characters together in a way that makes a lot of sense and has fun reimagining a very classic tale. Issue #1 has set up what should be a great read with issue #2 and I can’t wait to see where this mini-adventure goes.