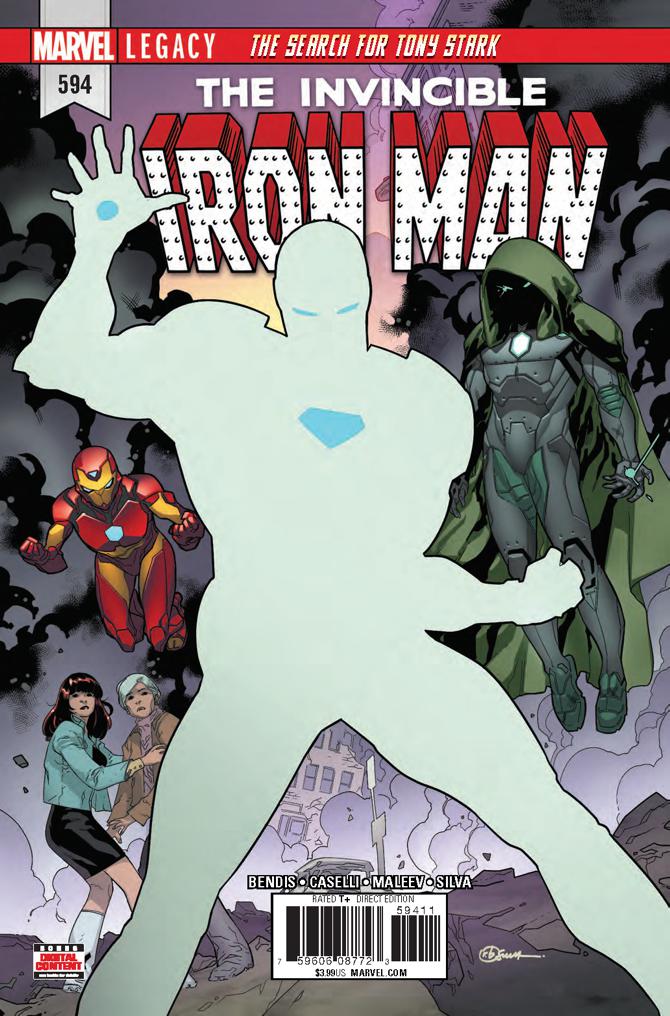 What could go wrong when a comatose billionaire disappears? A bunch of power hungry old white guys in suits would never try to take over the board, would they? No…that could never happen.

The Riri/Doom storylines continue to play out in tandem in this issue, I can only assume driving toward a unified storyline at some point. As an avid fan of both Invincible and Infamous, I’m totally fine with this. The only bonus to having the stories separated was more pages of awesome Iron fun each month. Beggars can’t be choosers, though, so let’s rejoice in the glorious attitude that is Amanda and the lightbulb moments that befall the Wrecking Crew in this issue.

Bendis’ voice for Amanda is pure brilliance. Riri and MJ are powerhouses, but Amanda steals the show in this issue. Her rocker-ness is on full display and there is a moment featuring an instrument that is very difficult to properly vocalize just how awesome it is. She’s fiercely protective of Tony, which is something not often seen involving a Stark and I like the family angle Bendis is building here with Tony/Riri/MJ/Amanda. Dysfunctional? Yes, but definitely a family.

The Von Doom storyline is equally strong, with the Wrecking Crew getting a few revenge smacks in on an unsuspecting Doom. Better than their revenge, the crew hatches a plan with their collective sub-standard IQ that had me howling. This will not end well for them, but it will be entertaining.

Stefano Caselli and Alex Maleev are both in the zone here. They are both well versed in every character in play due to the duration of these Iron runs, and there isn’t a poorly penciled panel in the bunch. Caselli’s slick, clean lines suit the Riri/Amanda storyline perfectly and the gritty darkness that Alex Maleev excels at is perfect for the darkness that still follows Victor Von Doom. The colour work by Maleev is on point, as always, and Israel Silva works very well with Caselli’s lines. This really is a brilliant issue from start to finish and these powerhouse teams are bringing this search for Tony Stark home with a bang. The final page, even though I haven’t missed Tony Stark one bit, was a great cliffhanger.

Invincible Iron Man #594 entertained me from start to finish. Bendis’ Ironverse is one of my favourite corners of the Marvel Universe and this issue is just another great chapter in two grand stories. Great words, great art, great comic.