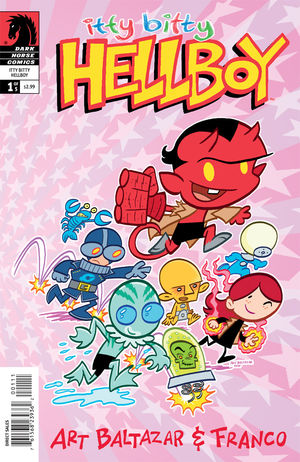 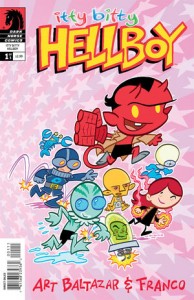 Art Baltazar and Franco bring their signature style to Mike Mignola’s signature creation and the result is exactly what you would expect; a great all ages comic book that both young and seasoned readers will enjoy.

Itty Bitty Hellboy takes the Hellboy mythos and turns it into a story of a group of neighborhood kids. In many ways the book as a very Peanuts feel to it. Not only is it about a group of children like Peanuts, but the structure of the book makes it feel like a comic you could find in the newspaper on Sunday mornings. This issue features six different stories that range from two pages to six pages. Each story has the familiar comic strip setup where there’s a quick buildup followed by a punch line. My favorite of which involved Hellboy, Liz, and Johann playing baseball. The jokes are age appropriate, and yet can be appreciated by both children and adults. In fact, the jokes are the reason for the adults to read as most of them are genuinely clever without having to resort to adult humor. While there may not be any laugh out loud jokes for you, there will be moments when you can’t help but crack a smile at what’s happening on the page.

My biggest worry heading into this book was whether Baltazar and Franco would be able to handle the B.P.R.D. characters as well as they’ve handled the iconic DC characters. Where as nearly everybody recognizes the DC characters, Hellboy and company aren’t close to being as well-known, especially among children. Luckily, the creative team pulls it off wonderfully well. They had the presence of mind to use the first story to introduce Hellboy as a scary character in a very funny way that include the villains Karl and Rasputin feeling safe in their box fort. As the issue continues each character is called by their name at some point, and they are recognizable by defining characteristics, that often come into play in the story itself. These characteristics include such things as Karl’s uniform and mask, Hellboy’s arm, Roger’s underwear, and Johann’s containment suit. This makes it very easy to get to know the characters without having to have read any Hellboy at all. This is very important to the issue, because there aren’t many kids who will be reading this that have ever read anything featuring these characters before, and that there is no backstory given or history between characters explored. With that said, one can’t help but wonder if this needed to be a Hellboy comic. I feel that the creative team could have taken any set of characters from any franchise and made a comic just like this. There is really nothing new or unique being said about any of these characters. Despite this, the book still works, and it is better to just sit back and enjoy the jokes being told with these characters.

Baltazar does a great job in having the art match the concept of the book. Keeping on the comic strip theme, the art is very simple with little in the background, but it a joy to look at. The character designs are great and the colors are beautiful. These are what is going to capture the attention of the kids, as they will love the cute look of characters like Hellboy and Johann while being drawn to the bright colors found on every page.

Baltazar and Franco are the preeminent all ages creative team, and they prove it again with Itty Bitty Hellboy. There is a difference between an “all ages” book and a “children’s” book, and this issue illustrates how drastic the difference can be. While kids will laugh at jokes about vegetables and underwear while being drawn to the young characters and bright art, the adults will appreciate the cleverness of the jokes and the comic strip structure. The only complaint that i have is that the characters feel somewhat forced into the concept, and that any group of characters could be swapped in and similar stories told. This complaint doesn’t take away from being able to enjoy the book, as the jokes do work with these characters. All in all this is a book for everybody to enjoy, and if you have a young child that enjoys to read comics it should be a crime for you not to pick up this book for the entire family.