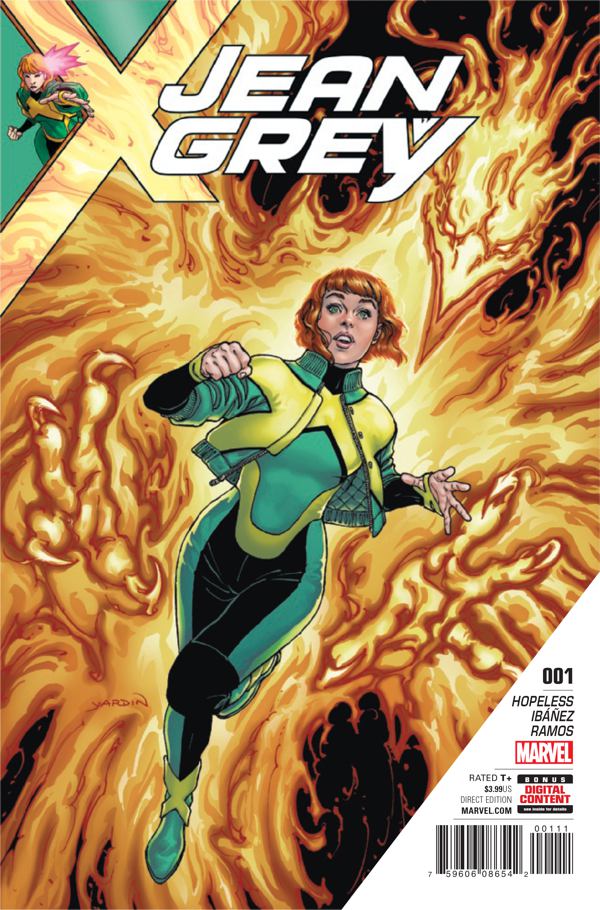 A time-displaced Jean Grey is having trouble reconciling who she is, was, and could be. Her reverie and introspection on the matter are disrupted by the appearance of the Wrecking Crew in Kyoto. As she chases them down, a firey specter haunts her, forcing Jean to confront the scary reality of the woman that both is and isn’t her.

Jean Grey has never had a solo series. Even though we are dealing with the Jean brought back from the past, there is still a lot of history to address. Luckily Jean Grey #1 is able to glimpse into the long and complicated history of the avatar and embodiment of the Phoenix. Classic scenes cascade the opening pages, marking Jean’s immense power and her more tenuous moments. I had very high expectations for the series and I think it may live up to them, minus a slight continuity gaffe.

I’m a fan and proponent of the idea that Jean and the Phoenix were meant to be one, that their forces would always be inevitably tied together. Even though other people have carried the cosmic might, I think Jean was always going to be its true home. That being said, I also think the famous retcon that brought Jean back in 1986’s Fantastic Four #286 needs to have a firm place in storytelling about any Jean.

Technically, the Phoenix was responsible for the Dark Phoenix, even if there has been contention regarding whether Jean herself was at fault. I think these matters are important because they make Jean’s story more complex and they examine her role as the holder of a powerful entity, as well as the responsibilities and morality that accompany her abilities. Also, stating that she ‘destroyed a planet’ feels contextually small, even if true. While there was only one populated planet around the star Dark Phoenix consumed, the fact of the matter is that she caused a supernova that lead to the said destruction of the planet and its five billion inhabitants. That scope is vastly integral to examining the relationship between the Phoenix and Jean Grey.

All that being said, Dennis Hopeless provides a good distinction between the Jean we remember and the Jean that exists now. The narration sometimes leans a bit heavily into teenage thought thus making it feel somewhat contrived, which I had to reconcile considering the tenure of the X-Men and Jean being a telepath and likely being able to quickly pick up on modern teenage vernacular. Those things aside, this Jean feels young and the way she looks at the world seems appropriate for who, when, and where she is.

The plot is appealing and startlingly fresh. Seeing Jean on her own is quite nice. I wouldn’t want to go up against the Wrecking Crew, either, but she handles the situation the best she can. Hopeless also portrays her empathy and concern for those around her, something I feel is a hallmark of who Jean is in any timeline. The mix of guilt, remorse, and youth makes for a story that could propel Jean forward in a meaningful way.

Just as Hopeless draws lines between the older Jean and her ‘present’ self, so does Victor Ibanez. There is an important distinction between our current Jean and her ‘past’ that reminds me of looking through a high school yearbook and comparing it to how people look at their 10-year reunion. Beyond these differences, Ibanez also crafts excellent battle scenes with particular attention to detail. In the debris, we get to see the moving parts that build up to chaos which matches the story element of Jean’s conflict between what most people know and what she has never experienced.

Jay David Ramos’ colors make Jean Grey #1 feel fresh. The range of hues is bright and on display. Ramos’ work helps to more firmly express that Jean now basically has the world ahead of her, even if she has fears regarding what she could become. I like the modern feel exhibited through the colorwork and it looks to be an important facet of distinguishing this series from continuity and other comics.

Jean Grey #1 has me in its talons. This comic truly could be a new step forward for the character. Even with my attachment to the Jean of Marvel’s history, I feel this Jean has never been written better. I hope to see more connections to the past, but also how Jean herself is trying to be more than what people know or remember. Every layer of this story matches its protagonist, so I’m excited to see what comes next.