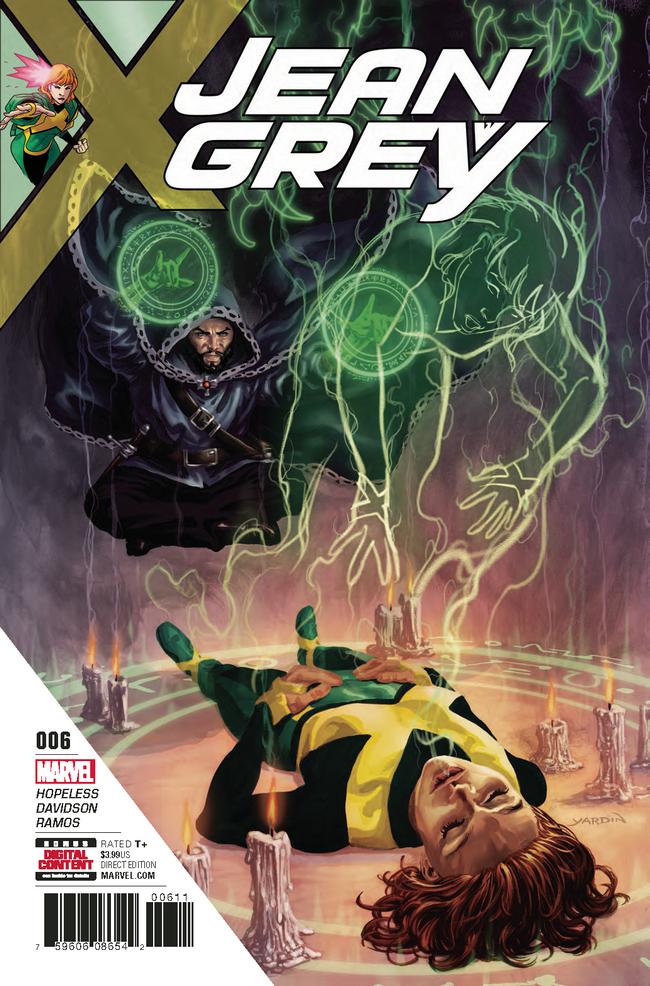 Dr. Stephen Strange helps Jean unlock a different part of herself, leading to a conversation between multiple parts of her psyche and spirit. Though fear has marked much of this journey, it is revealed that the image she has seen of the Phoenix and its destruction may not be a complete portrait. Jean realizes that instead of avoiding what she is, facing herself head on may yield her better results.

The sixth issue of Jean Grey satisfactorily addresses some of my own theories about the Phoenix and how the outside view of a razed world isn’t quite right. Jean finds out from “herself” that the reason others see her as an avatar as death, but only because such an experience has signified their experience with her older self. The Phoenix is still an excellent vessel through which to explore power, femininity, and relationships to others, and the fact that we see more of the nuance surrounding the Force bodes well for the comic.

Dennis Hopeless’ dynamic between the two Jeans allows room to discuss issues new and old about her. There’s no way a present Jean can have a conversation with herself without pivotal events as part of it. Hopeless explores an intriguing blend of temporal writing, looking both forward and back, to explore all Jeans’ relationship with the Phoenix. A younger Jean’s reason for hiding her powers somewhat works, but ultimately inches more into territory it seemed Hopeless wanted to explore, namely her role as the Damsel with her original team of X-Men. I think I can see where the writing was heading, but it both adds an interesting analysis and is an apparent example of men writing women in comics.

Paul Davidson brings a literal form of strange to Jean Grey #6. Bodies are lithe and nearly contorted, their emotions a drastically apparent examination of dichotomy and distinction. With Stephen’s first appearance, you can feel the arcane, the weird, that forms the basis of Jean’s experience. Davidson gives this metaphysical adventure an emphatic flair with stylistic elements that twist each body, but especially those of an “older” Jean. This effect is pushed to a symbolic extreme in Jean’s confrontation with her most recent self, the fire within the scene matching a pivotal point in the story and Jean standing at the precipice of an epiphany. Bringing Davidson on this issue was great for stepping away from the art we’ve seen before and working in line with Stephen Strange’s magical exploits.

Jay David Ramos employs a darker bent to this story than the series has demonstrated. Though monsters have been a part of Jean Grey as a recurrent element, the idea of monstrosity takes on a new form through Stephen’s home and later a spectral Jean Grey. Ramos portrays a shadowy psychic landscape through much of the issue, while young Jean and Stephen exist as brighter notes. This effect reflects not only the vastly different nature of this specific chapter, but its role in addressing a new part of Jean’s story that is still largely unknown.

A vast departure from previous issues, Jean Grey #6 brings in many new components to expand her story. In a manner through which she could not contact the parts of her mind we see in this issue, Jean faces herself and inches closer to a fully realized image of her future. The changes in this comic add another complex layer to the story of this Phoenix-host and how the ever cyclical tale of destruction, passion, and power may not be what she or readers think. With new things on the horizon, Jean Grey may end up touching upon important aspects of the characters’ story that reconcile some of the issues regarding the complex points which surround her.