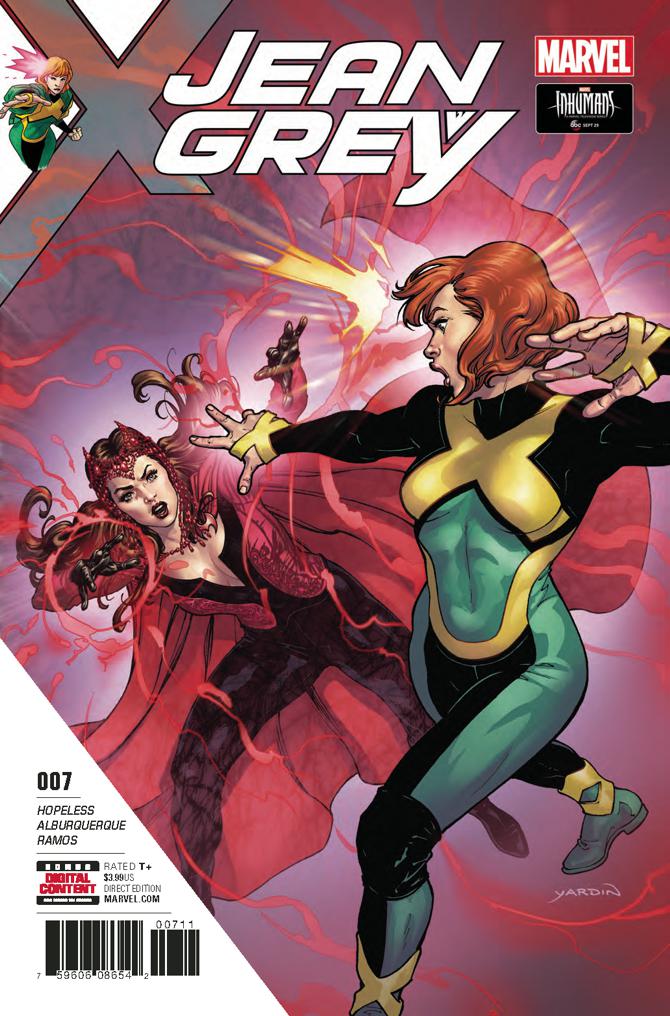 Jean is haunted by her spectral self of future past, trying to manage her goading and learn a lesson from a timely Scarlet Witch. While she picks up some tools for keeping calm, an older Jean decides she’s had enough, taking them both on a ride to a familiar face.

Jean Grey #7 is unfortunately the weakest entry of the series so far. It feels like it’s trying to piece too many things together and give them adequate time. What the comic has set up is a paradigm of helpful secondary characters who help Jean uncover new facets of herself. Some of that is there with Wanda’s presence, but ultimately this issue feels rushed and nearly haphazard rather than the more intimate venture into the crisis that a young Jean is seeking to avoid.

Dennis Hopeless is usually on point, but a couple of things feel off in the story. Again, it does feel as though it is moving far too quickly and, with the inclusion of the older Jean, has changed a significant part of the storytelling structure. This story may have benefitted from being broken up into multiple issues rather than put together as one. Hopeless’ writing of the older Jean also feels like a major departure from her characterization.

We may have last seen her as a major player in Phoenix: Endsong, but even in that story more of her nature was able to assert itself against the threat of a fractured Phoenix Force and a Shi’ar attack. From the last issue, it seemed as though spectral Jean was a distorted manifestation of her spirit. However, in the current issue she almost seems like she’s here to stay and that it’s really her. If so, there’s going to need to be some major reconciliation in how she is portrayed, as Hopeless writes her as though she is constantly annoyed and nigh abrasive. There may be a purpose for this writing, but it does stand at odds with almost any iteration of Jean.

Alberto Jimenez Alburquerque is hit-or-miss on art. Some moments have stellar visuals, like Wanda’s arrival and her transporting the people in the subway, as well as the comically parallel images where she is tutoring young Jean while Jean’s older self sulks away. Others though don’t quite work with the emotions present in the characters. The exaggerated emphasis in many scenes is over the top, paradoxically lessening the impact of these panels.

Jay David Ramos seems to go for more muted colors this time which allows for brightness to stand out but doesn’t fit narratively like in previous issues. There does not seem to be as much of an emotional impact compared to Ramos’ previous work. Wand and Jean using their powers, as well as a bright blue older Jean standing beyond them, are great representations of color throughout the issue, particularly when Jean’s body is taken over. These scenes use bright hues for emphasis and their effect is employed well, especially in the final pages. Still, Ramos’ colorwork this time seemed more tamped down, limiting the influence of color on the story.

For the first time, I have no real idea where Jean Grey is headed. Whenever the framework or structure for a story changes, there’s some capacity for it to not quite land. I’ve liked the set-up for the series so far, but this shift is one that is leaving me with a lot of questions. What’s going to happen from here? What does spectral Jean want and is she truly the Jean we know? How will Emma play a role moving forward? Hopeless has been hitting out the park on writing, so I have faith, but the series’ seventh issue is not quite what I expected and was maybe more ambitious than it needed to be via storytelling but less ambitious in visuals.