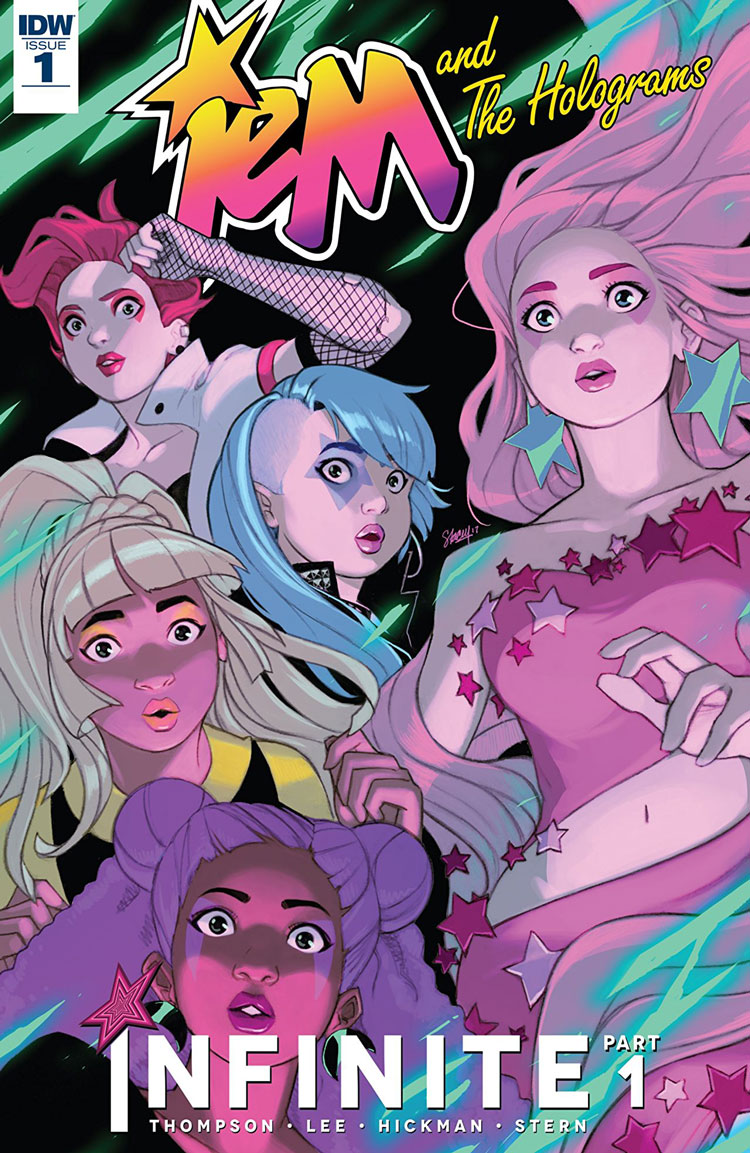 Jem has a major problem, and it isn’t the Misfits.

The Holograms and the Misfits just can’t seem to get along. Pizzazz holds a grudge and Jerrica is fed up. Rockstar woes aren’t the only problem, though, and the Holograms grapple with revealing the secret of Jem and Synergy to the world. As they think things over, the band comes across a familiar, but unwelcome face, asking them to do something bigger than a concert: save the world.

Jem and the Holograms Infinite #1 take both the signature bands and place them in a situation that pushes the boundaries of their universe. Music, rivalry, and relationships are typically front and center, but with the inclusion of interdimensional exploits, I feel we are getting a story that is allowed to add a new level of outrageous. I’m fond of these kinds of stories because of what they allow from a creative team. Sometimes, all bets are off, and other times we just get to see a new side to the creators and characters in a story that can defy expectation.

From the first page, Kelly Thompson has a lot of people and personalities to handle. While not everyone gets the same airtime as Jerrica or Pizzazz, I do like that they all express feelings and motivations that differ. In particular, it makes sense that Raya may not have a lot to say, but she fits right in with her new bandmates by demonstrating the same compassion they all do.

I like where she sits among them and I hope we get to see more of her come through in the story. Thompson maintains a sprightly humor even after the story shifts into the major plot running through this issue and those that will follow. Jem stories need that element to stay grounded, so even if things become dire, I have faith that it won’t become mired in dismal tones.

Side by side, Stacey Lee and Jen Hickman’s art occupies two worlds. I feel like this can be a helpful effect, but for Jem Infinite I wish we had stuck with one or the other. With Lee, there’s the classic glam pop look that has always worked well for Jem media, be it the original animation or the current comic.

Everyone is lush and full of life, their voluminous hair teeming with life around them. Lee’s softer edge still allows for a full range of emotion, fluff and style not betraying anger and frustration. With this art, I feel like the story could have maintained its whimsy even as it moved into fantastical story elements.

Hickman’s art is much darker, rough, and foreboding. The characters feel sharp, a strong presence as the story takes a turn that draws on the characters’ emotions, particularly Jerrica and Kimber. Hickman adds an atmosphere that touches on how scary the unknown can be, even for a group of women who use holograms for performances, and with these techniques the comic would have had a growing sense of unease and surprise.

Both of these artists tell a different kind of story and I would have loved to see what they would have done with the entirety of the comic, rather than relative halves. Would a darker tone have worked? Would lightness create a heightened sense of adventure? The shift is distinct and nearly jarring with little continuity, and it seems as though there is not a narrative purpose for the change. However, I can appreciate what both Lee and Hickman bring to this series and either of them would be stellar for the entire venture.

Sarah Stern is the bridge between Lee and Hickman, providing consistent colors throughout the comic. The Holograms and the Misfits clash in the plot and their appearance, the light blues and pinks of Jem and crew moving against the greens and neutrals in their rivals’ visage. Even with the change in art styles, Stern keeps up by slowly easing the hues between muted and shadowed ranges. With each of these other factors, the last page is a spectacle, easily standing on its own as a powerful image that makes me intrigued about how the art for Jem Infinite may shift with subsequent issues.

Alternate-dimension stories can often end up allowing for an enhanced creative range from a comic team, so Jem and the Holograms Infinite has my attention for what it could pull off. In every aspect of the story we could see a divergence from our usual Jem fare that allows readers to explore these characters as they are expressed through writing and illustration.

Though the two manners of artwork are in stark comparison to each other, they each imbue a different effect for this comic, and diving feet first into either would be an excellent choice. I’m not sure what waits in the other world, but I’m pumped for a slightly different take on the bands.