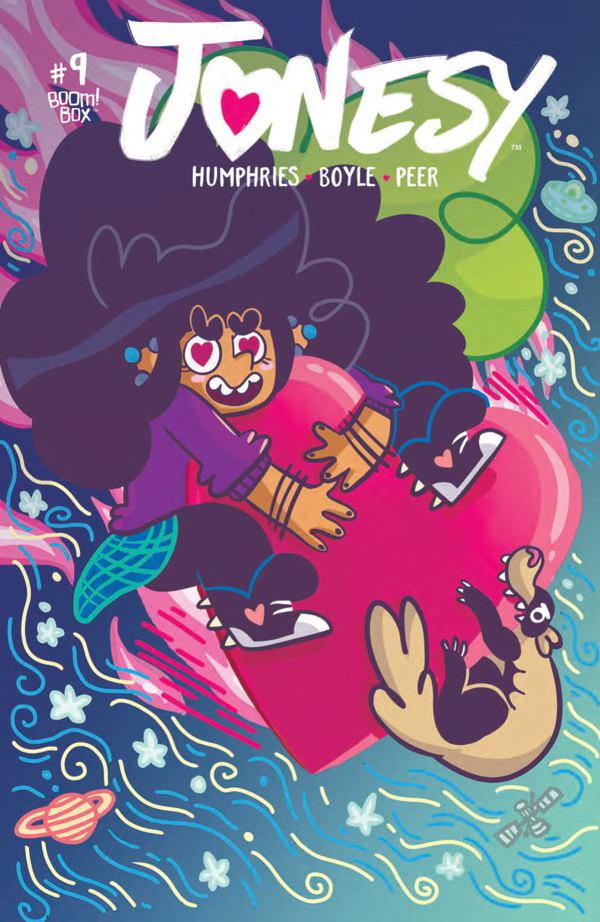 What if there wasn’t space for anything that you love?

Jonesy’s having a hard time adjusting to the big city. The subway is scary and everything she loves is clear across town. She misses her friends and is unsure whether to brave Shepherd City or face the anxiety of returning to Plymouth. After an unfortunate run-in with authority, Jonesy wonders if there could be something in the city for her after all.

One of the first things that struck me about this issue was the sense of isolation and Jonesy’s fear. She’s lost in a new world and she feels like she can’t go back to the place she calls home. This story is painfully real, and the way it’s crafted takes me back to my own teenage years. What is it like to have to travel across an entire city to find some semblance of peace? The distance between Jonesy and her destinations could itself a metaphor for being separated from something you need. This experience is captured in the heartbreaking question, “What if there isn’t space for anything that I love?”

Sam Humphries lays out the issue in a way that allows for interesting narrative parallels. The stark loneliness Jonesy feels is later assuaged by her finding what she’s been looking for, as well as by the appearance of a young Muslim girl on the train, and Wesley’s own disclosure that he puts up a front to look cool and is now willing to help her. While this story is going to continue, I appreciate that this chapter felt like its own story, and that’s not something I see in a lot of comics. There is a rather neat resolution by the end which I think helps the storytelling while still pointing to more in the future.

Caitlin Rose Boyle definitely jives with the funky, messy, world of Jonesy. Each character is full of spirit and life. Even in the scenes marked by Jonesy’s feelings of being alone are captured with a helpful clarity that expands the expression of emotion through the series. Brittany Peer takes Boyle’s work and infuses the key emotions that run through the issue. In particular, Jonesy’s intense feelings are marked by wonderful shifts in color schemes, from the dark purples of her nearly empty room to the jarring contrasts from her anxiety of riding the subway. I love these kinds of effects because they add a new level of analysis and perception of the events within any story.

Jonesy #9 examines our protagonist’s anxieties with jarring precision. Her fears are real, justified, and the very same ones that most if not all adolescents experience. We get to see Jonesy’s anger and apprehension, expressed wonderfully through the narrative and the art that accompanies it. This is a great issue if you want to look into the challenges of teens and adjustment and perfect for the young people in your life who may need some kind of outlet.