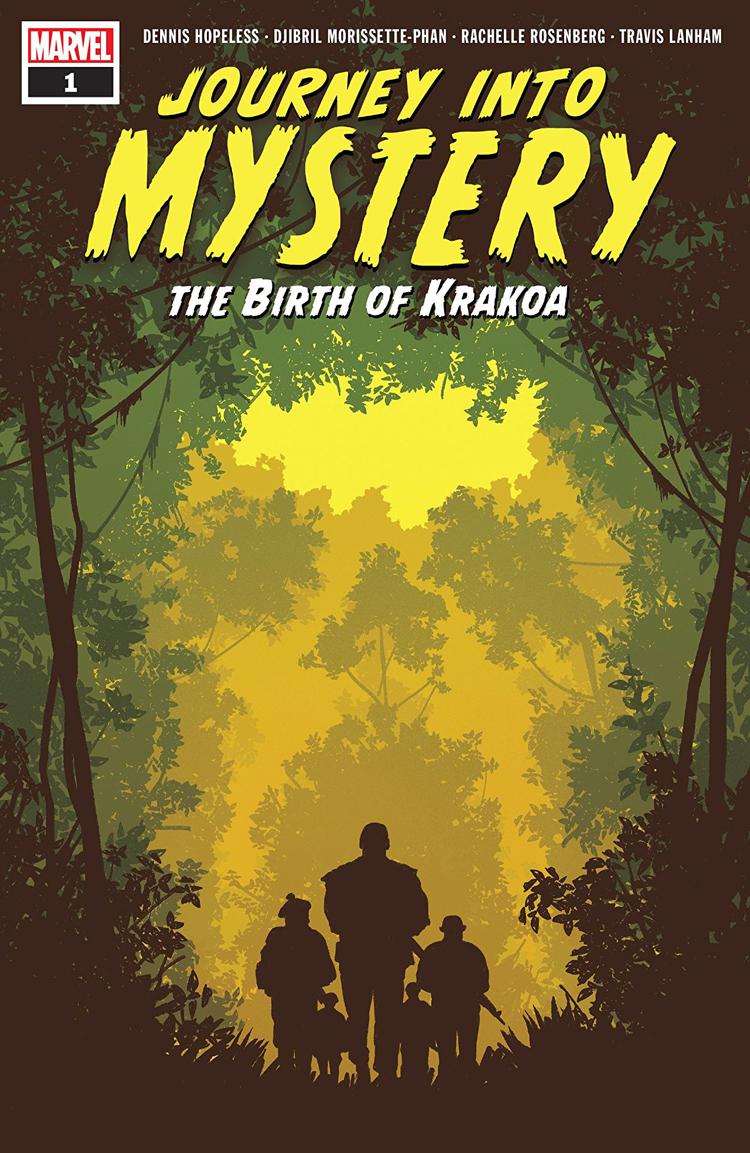 Get ready for some old school, serialized, campy, horror – Marvel style – with this Journey Into Mystery one-shot.

Those adjectives are said with love, cause this comic is a riot. Evoking a feeling that this was crafted 50 years ago, while being crafted with modern day skill, this one-shot tells the tale of how the sentient island Krakoa was born…and of course Nick Fury (Sr.) was involved.

This story goes way back, though, before Infinty formulas or S.H.I.E.L.D. or being the creepy guy on the moon…no, this is from the Howling Commandos days! Hopeless does a great job of tapping into what a Nick Fury with two eyes would sound like, while maintaining that same gutsy gusto readers are familiar with. Fury is a brash, headstrong character and I really liked how Hopeless uses an omnipotent narrator to tell Fury’s story. It gives the issue a classic feel, like this is almost an adapted radio drama. The horror elements fall into that same zone, like comics was thrown back to the golden age this week, without being so over the top they are almost unreadable.

Hopeless crafts this one-shot well, pacing it in a manner that tells the full story without ever grinding to a halt or feeling rushed. Telling a complete story in a single issue is no easy feat, especially when your principal “villain” is a living island, but this is a fully rounded out story. This feels like it could be the first issue of a series, like Fury’s greatest missions or some such thing, each told within a single issue. Dammit, now I hope this is the case, because that would be friggin phenomenal.

Before I go down the rabbit hole of how awesome it would be to have more stories like this, I need to give more credit where it is due: the art team of Djibril Morissette-Phan and Rachelle Rosenberg absolutely CRUSH this issue. Morissette-Phan’s style is the perfect classic-yet-modern work that can simultaneously take readers back to a different time in comics while feeling stylish and new. His storytelling, especially where the horror elements are concerned, is absolutely phenomenal. He captures the campy terror of the Commandos brilliantly, while giving Fury a stoic, cocky grit that says so much in a single look that could never be conveyed by words. His pencils are elevated by the amazing work of Rachelle Rosenberg, who sells this retro vibe so damn well. Her colour work is what brings everything together, the one-way-ticket to the past and a palette that makes you feel the swampy, cloying heat of being on an island in the Pacific. Her work is simply fantastic in this issue and is an integral cog in making this fun story work so very well.

Journey Into Mystery: The Birth Of Krakoa told me a story I never cared to know, but did it so damn well that I crave more stories like it. This is an expertly crafted one-shot that is just old school fun, and I loved the vibe this creative team was able to nail with these pages. You won’t be disappointed if you give this comic a shot.