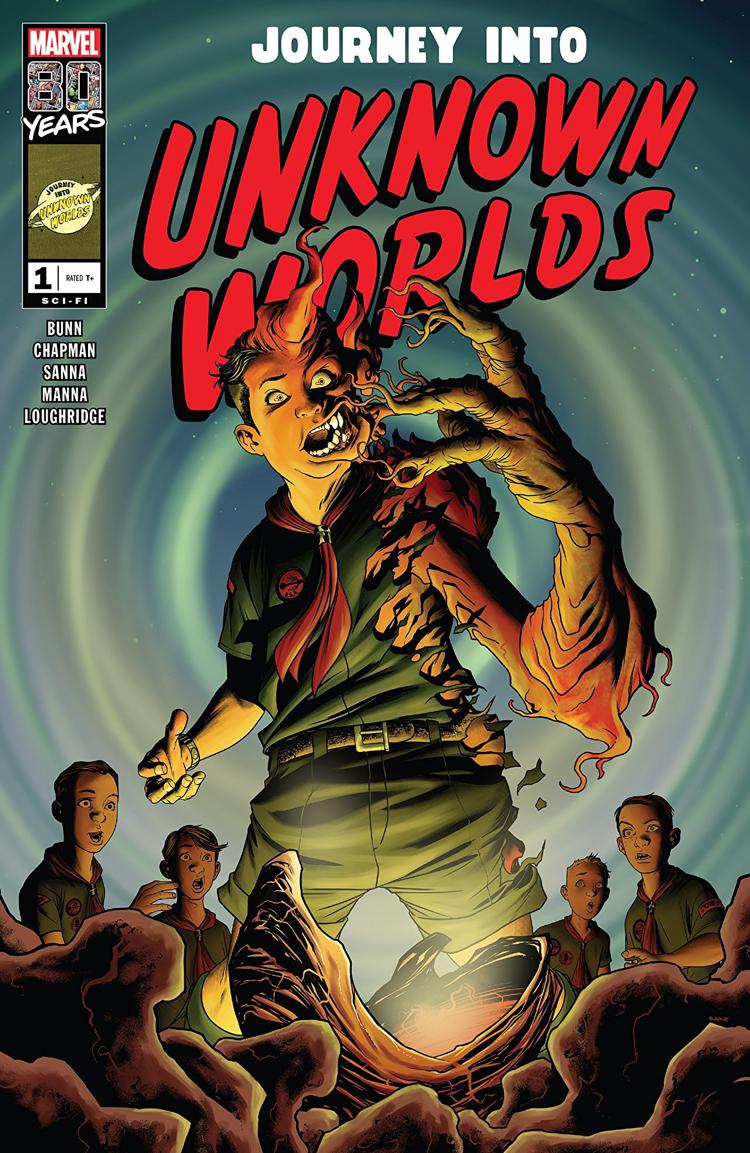 From their earliest days, science fiction and otherworldly concepts have been a major influence and theme within comics. Concepts of space aliens and other planets have permeated every major comic company and have touched every major character in some shape, form, or fashion. In the 1950’s, Atlas, which would later become the mighty house of Marvel, published a science fiction, horror, fantasy title Journey Into Unknown Worlds which would feature different stories that fit within one of or all of these specific genres. Well, Marvel has decided to revive its homage to science fiction, horror, and fantasy and boy does the first issue deliver.

Bones of the Earth is the work of writer Cullen Bunn and artist Guillermo Sanna. The story centers on a group of scientists who are sent to investigate the disappearance of another group of scientists sent to investigate an unknown object that had entered the Earth’s atmosphere. When the unit arrives at the site they find an enormous skeleton that is humanoid but much too large to be that of a human. This alone poses quite a few questions for the team and is the factor that causes them to establish their camp in this spot. The story quickly heats up as we realize that not even their containment suits can protect them from whatever newfound organism has come raining down from the heavens. Bunn writes an amazingly interesting sci-fi fueled story that can only be described as Invasion of the Bodysnatchers except the Body Snatchers don’t want to body snatch and they don’t want to end the human race. One of my favorite scenes during Bones of the Earth comes when the character Bryce questions the parasite about why they can understand each other if the parasite is an alien from another world and he gets one of the most ominous responses possible “[p]erhaps we absorb language. Or perhaps two species can understand one another at the point of their extinction.” The story ends without ever actually telling you how its resolved or if the parasite and Bryce are successful in their mission, but it does do a good job of implying that maybe…..they aren’t. Bunn pumps out an amazingly creepy alien story that is only elevated when paired with Sanna’s beautifully creepy artwork. I won’t spoil too much but the way Sanna draws the twisted skin, teeth, hair, and bone of the mangled bodies is beautiful yet horrifying to behold. He does an absolutely outstanding job of delivering scope, scale, and detail in such a short amount of time that by the end of this particular story you end up feeling like you’ve spent an entire issue with the characters and the conflict. Bones of the Earth is a story that I would actually love to see turned into a full-blown comic because the concept and premise are just that interesting.

Chrysalis is the work of writer Clay McLeod Chapman and writer Francesco Manna. The story centers on a group of Cub Scouts during a camping trip and one young scout’s, Billy Pendleton, struggles with being bullied by his troop. That night after his Scout Master has to help free him from a tree that his bullies left him hanging upside down from Billy finds himself investigating a meteor that has fallen near their campsite. As a comic book reader, Billy is extremely excited not only at the meteor but at the prospect of being the only boy in the troop to earn a badge for finding a meteor. Billy decides to pick up a stick and like all kids rather than exercise caution, he decides to poke it, until it cracks open and out comes a pink gelatinous lifeform. The lifeform takes over Billy and transforms him into a giant bug-like creature that ends up changing his entire troop into the same buglike creatures. What I love most about this story is that it takes the concept of the campfire story and the creatures lurking in the woods around you and breathes life into it. The story literally turns the campers into the things lurking in the woods that they were terrified of. Manna provides beautiful art that really elevates and pairs well with Chapman’s writing. He delivers beautiful set pieces and perfectly breaks down scenes allowing each moment and action to actually breathe and translate to the page. However one of the real stars of this book is colorist Lee Loughridge who adds absolutely stunning colors. Loughridge’s beautifully vibrant and explosive colors really let the story pop.

Overall, I love that this issue kept to the idea of the Unknown Worlds part of the books name and it delivered two stories centred on alien lifeforms from other worlds. Marvel is doing something really special by bringing this book back and allowing us to revel in that old school comic nostalgia with stories that felt plucked from the heyday of science fiction and aliens.