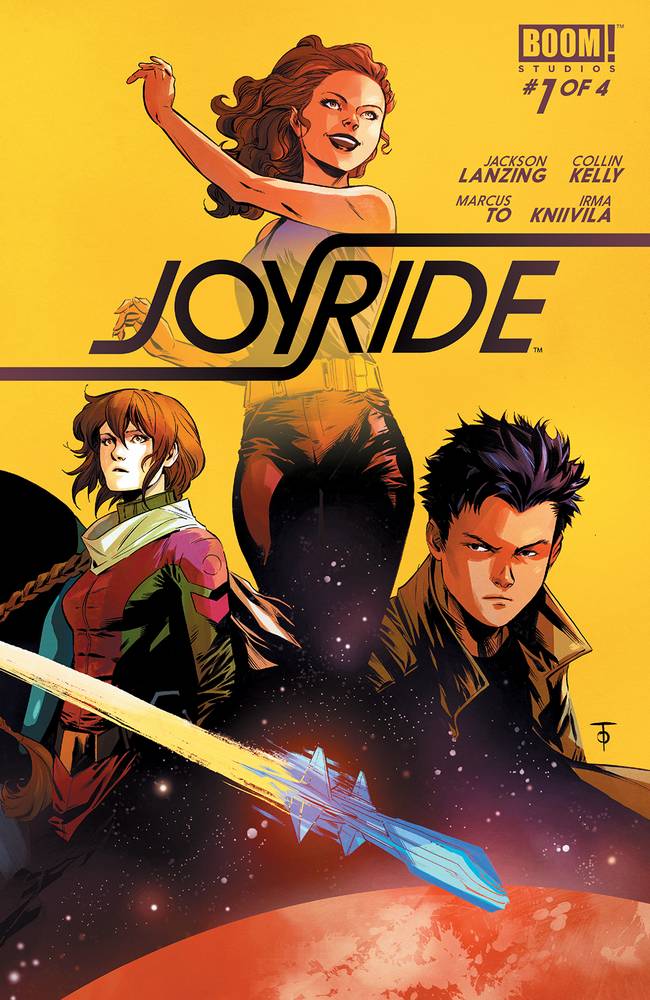 Man, being a teenager sure can be tough. Changing bodies, unbridled emotion, and an Earth shrouded from the stars…who wouldn’t want to pilot a super sleek spaceship off planet? Joyride #1, a new series from Jackson Lanzing and Collin Kelly, with art by Marcus To, colored by Irma Kniivila, and lettered by Jim Campbell, speeds off with a whir of its engines and a plan to take over the stars. While not without a couple of bumps in the road, the ride is exciting and overflowing with an energetic take on growing up.

Uma and Dewydd live on a terribly depressing version of Earth. Far into the future, the stars have been blocked out, never to be gazed upon by the denizens of Earth. Fed up with the current state of affairs, including the watchful eye of the World Government Alliance, the two teens attempt a risky off-planet excursion. Their trip, as one might have expected, become muddled by an uninvited guest, an evil alien, and a plan much more extensive than previously conceived.

This first issue does everything a first issue should in terms of setting up the story and characters. Within the first section of the issue, we are introduced to the two main characters, Uma and Dewyyd, their personalities fleshed out through their long conversations. By mid-issue, the premise of the book is laid out in detail, laying the foundation for things to go awry in the next few pages. The pacing is generally strong in this first installment, though at times the flow suffers from a bit of overtelling rather than just showing. The leading teens in this book are relatively well-developed by issue’s end, while the supporting cast could have used a little more of an introduction. Overall, Lanzing and Kelly have laid the plot down well, planting a handful of intriguing seeds to be watered over this mini-series’ duration.

Marcus To has a strong command for expressing emotions on the faces of the characters. He has perfectly captured the playful dialogue scripted by Lanzing and Kelly, and added a mischievous demeanor to the cast of characters. To’s lineart is precise and fine, painting big scenes with minimal lines. This style suits the space atmosphere and energy of the book wonderfully, bringing a sense of quick action and subtleties that carefully leads the eye around the page. Irma Kniivila’s colors are truly pleasing, adding to the whimsical tone of the book while allowing the line art to breathe, only adding to its overall readability. Jim Campbell’s letters are, as usual, a wonderfully balanced delight to watch spread across the page, the sound effects adding a fast energy to the page.

At the end of the day, this issue is a fun debut of a rockin’ new space series that takes you up, up, and away from the mundane and into the stars. At this point, the plot could go anywhere as much of the story’s conflict is left open by the end of the issue. By the last page, we get a group of witty teens and a robot shooting through space in a suped up vehicle, and that premise is entertaining enough to loop me in for the rest of the series.