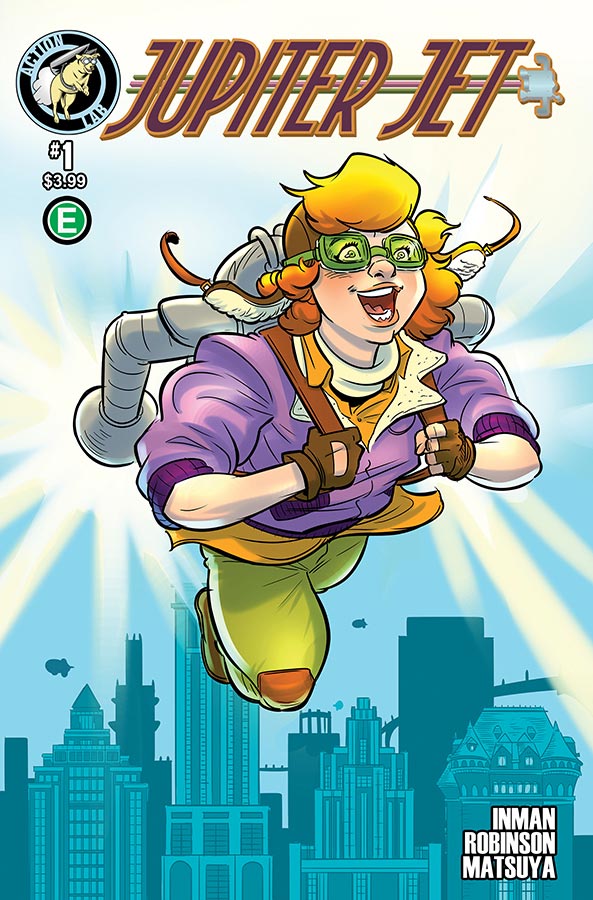 There was once a time long ago when life seemed simpler and innocent. Jokes were silly, action was adventurous and the line between good and evil was clear.

Whether or not our reality was ever truly like this, the golden age of comics preserves the idealistic dream of it for generations later to enjoy. It’s rare now for a comic to capture the spark of goodness that comics from the 30s, 40s and 50s burned with.

This week, however, a new mini-series starts that not only revives that classic feel but also introduces the world to a new hero for readers to enjoy. Jupiter Jet #1 is the creation of husband and wife team Jason Inman and Ashley Victoria Robinson. For years they have taught everyone about the origins of our favorite heroes on the Geek History Lesson podcast. Now they use all of their amassed knowledge to expertly bring their own hero to life in an action packed throwback to the golden age.

The bright-eyed wonder and hope that once existed in this country has been brought back to life in the pages of Jupiter Jet. Inman and Robinson have captured humanity’s turn of the century spirit of adventure in their main character Jacky and the world she lives in.

Even though it is set in a slightly more technologically advanced version of our past, the story feels timeless. It’s more than the architecture, outfits, and technology but the way the character’s speak, their way of thinking, and their actions. Jacky’s spunk and her brother Chuck’s determination will immediately have the reader falling in love with them and cheering them on. It’s almost as if the Little Rascals were turned into superheroes.

It would be enough just to enjoy their adventures each issue but there seems to be more here than just a story of the week. They struggle to survive after the death of their father, to keep a business afloat, and help others who are just as bad off or worse than they are. Inman and Robinson haven’t just given us a pair of cute characters to follow but also a mysterious story that appears to have much more developing in the near future.

It’s this inclusion of the unknown that lures Jacky and her brother as much as it will the reader deep into the story. They are master story-tellers and the promise of exploring a world they have created for us is exciting.

The other key part of Jupiter Jet that takes the reader back to the Golden Age is Ben Matsuya’s artwork. He has designed the characters to look like they have come straight from the pages of the brightly colored comics of the past. The characters, both hero and villian, exude a kind of fun vibe.

The style may remind readers of the Looney Tunes that also came to life during the Golden Age. The look is a caricature of human features and expressions that are over the top but fitting for the story. Architecture and landscapes are idealistic looking with the buildings especially capturing the dreams of what the future holds. The designs are clean and uncomplicated and will make the reader yearn for those simpler times. The character design for Jacky is near perfect. She exudes a tough, go lucky, adventurer quality that firmly plants her on the same level as Amelia Earhart, Nellie Bly and Annie Oakley.

Colorist Mara Jayne Carpenter uses solid bright colors to make happiness and hope leap off the page, even in scenes of sadness.  Cell shading keeps the images clean, fun, and gives an animated quality to Matsuya’s art. This effectively gives the panels added life and energy. At any moment the reader will expect Jacky to fly off of the page with a zoom. All the energy, color, and designs make this book a blast to read.

Included in this issue is a back-story for the jet pack which is drawn in a different style from the rest of the book. It works perfectly because while the main story focuses on the kids the back story deals with the adults. The art is a little more modern than the rest of the book and has a grown up look to it.

Taylor Esposito handles the lettering for the main story as well as the back up and does a more than excellent job. The text is easy to read and conveys excitement in all the right places as exclamations from the time period (Aces, Abysinia, etc…) are sprinkled throughout the story.

Comic book lovers will revel in the pages of Jupiter Jet and smile at the main characters. It is definitely an all-ages book in that kids will have fun reading the adventures of Jupiter Jet and adults will fall in love with a story that can take them back to a happier time. It’s a much needed escape from our complicated world. Inman and Robinson have created an instant classic for readers to treasure over the years.