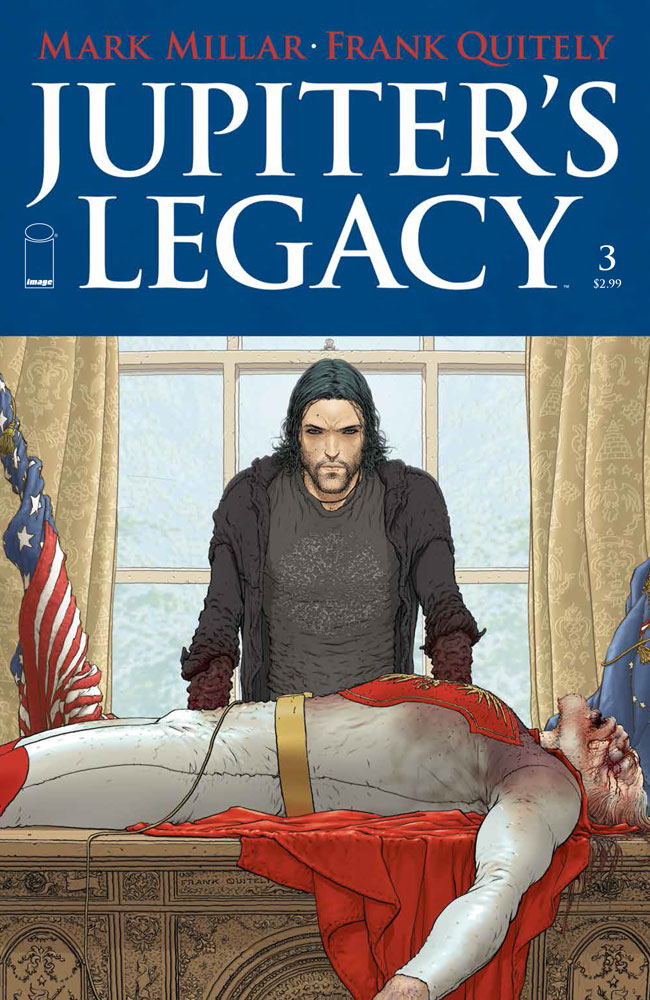 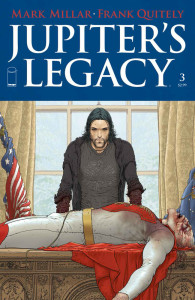 The generation gap has never been wider than it is in Mark Millar’s latest creator-owned endeavor, and not unlike a lot of the writer’s work to date, you may be hard-pressed to find the sympathetic character at the story’s center. With corruption breeding at both ends of the age spectrum for the heroes of Jupiter’s Legacy, who will stand out as the victor — the old man who refuses to use his powers beyond the dictates of Golden Age moralism, or his self-centered, dangerous son who may have no morals at all?

Millar continues Jupiter’s Legacy with what is clearly the inciting incident for the series as a whole going forward, and without revealing too much, it clearly changes the game for all involved. The key conflict makes sense from an individual standpoint, but in the end, I’m not sure I was able to make the leap between that and what ultimately happens, which is the complete union of all super-powered individuals toward what is ultimately a dastardly cause. I understand Millar proposes a world where corruption is nearly absolute, and perhaps that is the key to accepting all that comes afterwards, but even in similarly themed comic events (Kingdom Come, The Authority, Millar’s own Civil War), there is a thoughtfulness and debate to decisions that is lacking here. The developing relationship between Chloe and Hutch, however, is a surprising delight, as this son of a villain and seeming drug dealer, may be the most heroic figure of all in this strange new world.

One of the things I most admire about Frank Quitely’s growth as an artist is his ability to render both Golden Age stoicism and modern nihilism with equal glory and precision. It is this rare talent that makes the artist a perfect choice for delivering this world of culture clash and generational divide. The extent to which Quitely details Utopian’s aged appearance, without ever crossing over into the grotesque or caricature is masterful, but when an uncanny disturbance is called for, he doesn’t pull punches. All of his characters, in costume or not, have a real sense of real life weight and texture to them that, while certainly exaggerated, really brings a sense of familiarity and raw believability to Millar’s script.

A solid new chapter that is sure to appeal to fans of Miller and Quitely’s individual works to date, Jupiter’s Legacy #3 may not be breaking new ground for the comic market, but it is certain to entertain those who would seek to deconstruct the super-hero genre. If nothing else, we get to take the beautiful trip down the spiral of these heroes demise, and appreciate the scenery all the way down.