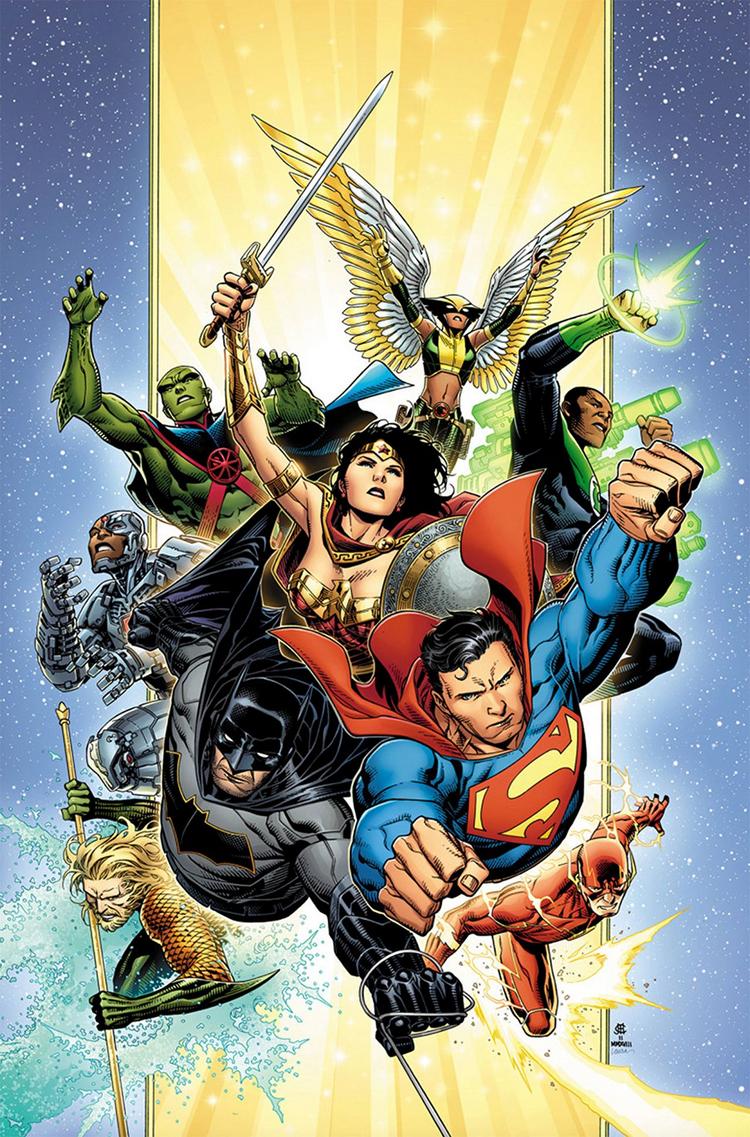 The new era of the Justice League is here and Snyder ushers in the Justice League with a roaring cosmic story that reaches far and wide across the DC Universe in a debut issue that boldly declares that a new era for Justice…and Doom is here!

The opening page sets the stage with how far-reaching the beginning of the storyline is across space and time. From 85,000 years to 5,000 years from now, there’s a thin line and focal point going through the pages that the issue clarifies over time. Snyder is encompassing the entire DC Universe with one issue making Justice League, THE book to read and it’s only been one issue. The beginning of the new era begins with the narration regarding the Hall of Justice, a cornerstone for the Heroes of DC brought to us by the amazing Cheung pencils with Morales inking making the designs and locations shine with a classical feel to them. Morey’s colors are bright and dazzling shining a light on the debut of the Hall.

A narration gives the Hall of Justice and it’s newfound connections to the relationships with the Heroes and citizens a certain mysticism and legacy behind it. Snyder packs in a lot of history into the narration of the League’s thought process behind the artifacts and the way the Hall operates and it’s secrets. It has the makings of the start of a grand adventure and all we have to is enjoy the ride.

The latest adventure of the Justice League requires everyone and I do mean everyone. The work Morey does on colors for Cheung’s pencils should not be underestimated because they make the splash page of every main member of them in their own respective environment to combat the Subterranean threat and it looks amazing. Snyder hits the ground running with the team dynamics and camaraderie between the League members. Between the jokes riffing on Batman’s voice amidst the information being shared throughout the League about the nature and scope of their new threat, it all clicks into place. Snyder balances it all with an easygoing flow, capturing everyone’s signature quips and style as they joke and discuss the moves they each specifically see. Cheung manages to not only draw the main Justice League across a splash page but with his panel spacing squeezes in cameos from different DC Heroes as well. The lettering from Napolitano is working overtime to align itself with the many characters and dialogue across the pages, an appreciated approach to the Martian Manhunter being reintroduced into the fold as the heart and soul of the Justice League again is the telekinetic connection that League members share with him and vice versa. The lettering there comes across differently with the mental conversations being color coded given whoever is talking. It’s a small touch that really brings the team dynamic together.

Martian Manhunter guides the book and the team double time as the book progresses. Where his comrade’s pages have a white background and vibrant colors, differentiating locations behind them, and action-packed panels…J’onn has space and it’s darkness playing off of a sense of isolation that the comic counters with being as he’s running point for them and keeping them together. A great sequence involving the Martian Manhunter has him destroy a rather large target as a fantastically detailed Dragon Beast and even in space, the gleam of the colors are made to look good.

Switching gears to the other half of the New Justice equation, we’re treated to the villain portion of the rebranded Justice League and Snyder can write bad guys indeed. For the sake of the story, I won’t spoil everyone who pops up during the villainous second half but Cheung gets to use Morales inking to great effect, reinforcing the Morey colors and the reds and warmer colors that bolden a certain bald head man’s green and purple armor. Snyder is setting the pieces for his story and in the process sets up major players in J’onn and Lex Luthor. The big mystery of the issue gets fleshed out towards the end and the setup for Snyder’s Justice League. It’s explained in depth and is reminiscent of Jonathan Hickman’s Avengers series with the current setup of the DCU in the wake of No Justice.

Justice League #1 has something to stand on in the wake of the weekly event No Justice. Snyder has revitalized the title into a comic book that’s encompassing the entire universe in which it is set and covers a lot of ground in twenty-three pages. With a new era comes new threats, new faces, and new problems to face. We’re getting both sides of the coin with the Justice League and Legion of Doom and the voices for all of these characters fit like a glove under Snyder’s pen. Cheung’s pencils are a dynamic page turner that plays with sizing and the diversity of the DCU whether it’s characters in different habitats or squeezing in some visual references that lend to Snyder’s ideas of incorporating every part of the universe inside the pages.

Justice League comes to the stands with a message and a renewed sense of optimism and grandiose storytelling that’s making this title the only book DC Comics title you need to read, and it’s only been one issue.