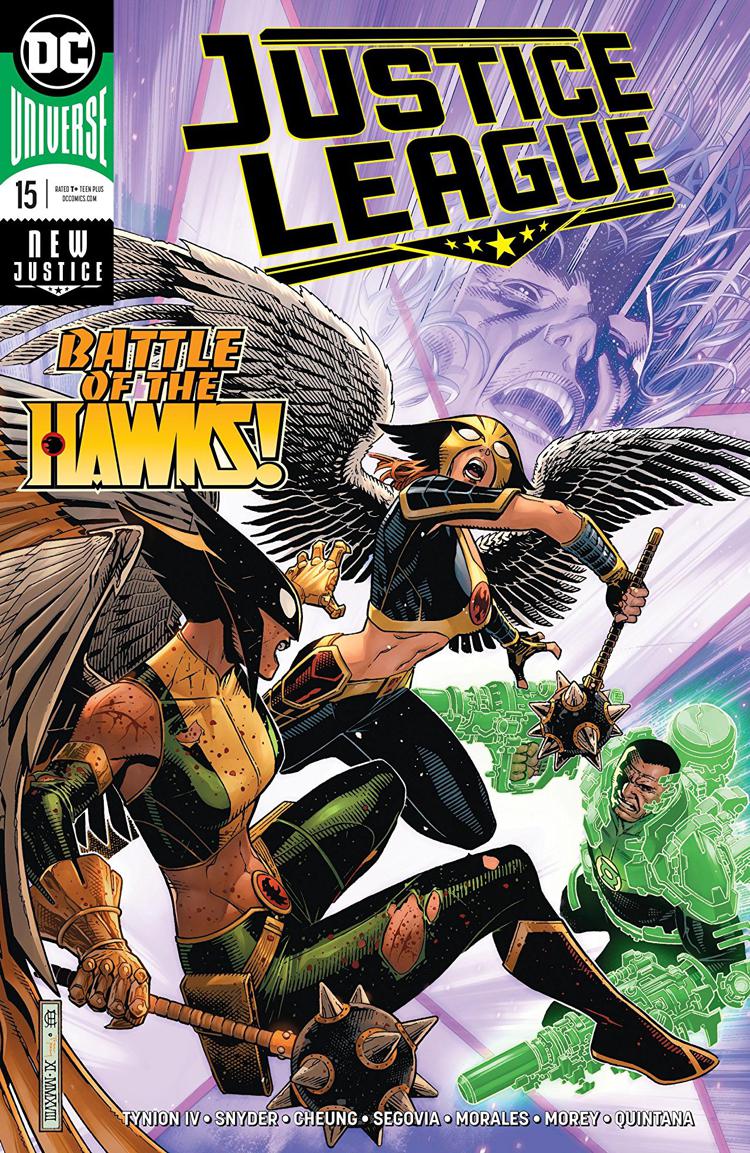 The journey of our Thanagar Prime trio continues with Tynion digging into the planet’s secrets and giving Green Lantern, Martian Manhunter, and most importantly Hawkgirl stories central to them amidst the overreaching plot that’s the basis as to why they’re there in the first place. The second chapter of “Escape from Hawkworld” doubles down on its setting and its primary cast as Hawkworld shows that it has plenty of secrets and connections that are complicating matters for the trio trapped on the planet. Tynion and Snyder’s story continues to flesh out concepts and stories that are circulating one another shown again with Cheung and Morales doing only three pages total, contributing to the growing Starman plot on Earth and leaving the rest for Segovia, Morey, and Quintana to show off Hawkworld and all of its mysteries.

Picking up after the last issue’s reveal that you can’t have a Hawkworld without the Hawk-related characters we all know and love, Hawkman and Shayera are revealed to be tied together as he’s under the Empresses thumb. Quintana’s colors do well to differentiate the two Hawkgirl’s whenever they’re on the page together with Shayera always appearing regal and composed given her status as Empress and her role in the story as the keeper of all things secret on Thanagar Prime. Although she’s a Hawkgirl alongside Kendra, Shayera is drawn with a smug air that has no problem with doing what needs to be done…with killer intent. Segovia captures the characters changing facial expressions and how each character fits on the page very well, keeping the dialogue from Tynion moving briskly as the story doesn’t call for a lot of standing around and deep discussion. There’s a lot of isolation when it comes to how the pages are framed, with Segovia instead choosing to focus on the characters themselves and not on the backgrounds, except when Tynion calls for a bigger scope in the pages.

Thanagar Prime is an interesting character in this arc with the world literally burying secrets and having an entire system based around our trio needing to pull off an intergalactic bank heist/rescue. It all adds to the basis of Snyder and Tynion’s story involving secrets and what we think we know about stories. Segovia and Quintana give larger pages a more mysterious feeling to them with the Vault System location getting a single page all to itself displaying that Thanagar has its own distinct culture and systems in place that set it apart and strengthens the world building that Snyder and Tynion have been doing in Justice League. Tynion’s script describes a major point about how Thanagar and how its business is run, letting Segovia have fun with all manner of DCU aliens and with the larger panels help convey a sense of motion and movement with the story as the heist is set and motion and the feathers begin to fly.

“Escape from Hawkworld” is connecting to the happenings on Earth where the Trinity are dealing with a continually powering up Starman who connects directly to what’s happening on Thanagar and the ongoing Totality plot. Cheung and Morales have a sharp and clean sense of destruction as Starman opens the book surging power, beautifully colored by Morey who nails the colors of each Hero in the way that shows the specific color scheme of the Trinity with Morales inking outlining The Trinity and Starman. Keeping Cheung and Segovia’s sections connected by the writing is important as Tynion plots major seeds and information throughout that further unravels the story of the arc of The Totality and the wider DC Universe. J’onn, Hawkgirl, and John all have a part to play and the different pieces of the puzzle not only add to each specific character’s arc but displays how large and encompassing The Totality has been up to this point. Snyder and Tynion are continuing on with their grand narrative and at least some of its secrets are about to be revealed.