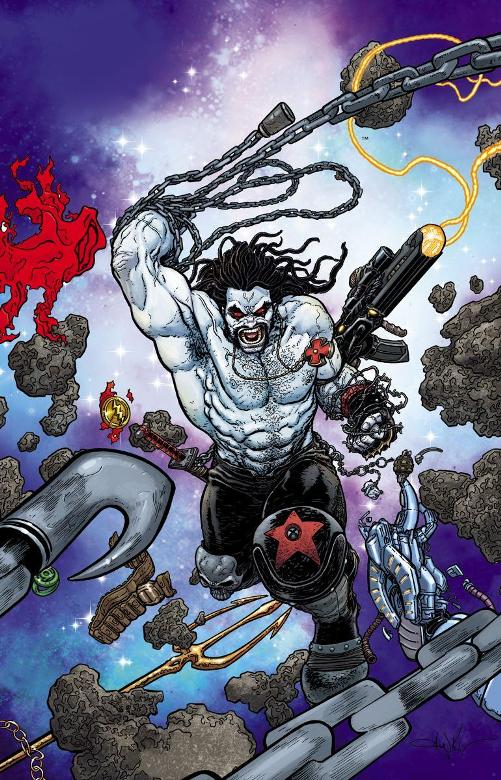 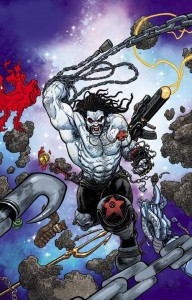 After weeks of controversy, hand-wringing, and nerd-rage, Justice League 23.2: Lobo is finally here. Yes, Lobo looks different. He doesn’t look like the sketch DC released that caused so much sturm und drang among the comic book fandom. Marguerite Bennett and Ben Oliver deliver a Lobo who is still the baddest bastich this side (or any side) of the Horse Head Nebula. If you are among those who decided to “protest” the redesign by skipping the book, I implore you to give it a go. You will be pleasantly surprised.

The story is heavy on blood, action, and character. Bennett is now two for two in my book. She already demonstrated in the Batman Annual that she as a gift for writing clear, distinct inner voices for her characters. I can’t quite imagine Brad Garrett (the voice of cartoon Lobo) in my head, now that he’s younger, but I can imagine something close. Lobo is still a remorseless bounty hunter who kills at the drop of a hat and has a messed up sense of humor. He’s a bit less bombastic in his speech, but his actions capture that trademark “don’t give a frag” attitude I’ve come to expect from the Main Man. He oozes tough guy personality, and in a refreshing change of pace, it doesn’t feel forced. Many of the heroes and villains in the New 52 got new “hard-edged” personalities that are simply trying too hard. I actually wonder if this Lobo is poking fun at the rest of the current DCU, just as Keith Giffen’s Lobo was originally a wry commentary on the humorless, “grim n’ gritty” early 90’s comic book landscape.

Lobo owes much of his flamboyance, understated though it may be (well, understated for Lobo), to Oliver’s art as well as Bennett’s words. I’m completely sold on rockabilly Lobo. It probably helps that I’m already a fan of the rockabilly aesthetic generally, and I really love Elvis, Johnny Cash, Jerry Lee Lewis, etc. It isn’t just the look overall that I enjoyed, it’s the details as well. The stubble. The smile. The teeth. I’ve never seen a character with expressive teeth before. Lobo’s teeth could be their own article. The only visual element that bugged me was the blue crap on Lobo’s face. I’m not sure what it’s for, and it seems incongruous with the rest of his look. I’m the first person to celebrate silly superhero outfits; just recently I defended Jay Garrick and Alan Scott’s original Golden Age duds. But a look needs to be cohesive to work, and the neon blue body art (?) just doesn’t fit.

There you have it: new Lobo, very different from the old Lobo, but still very Lobo. The story set up at the end of the book even allows the reader to enjoy the best of both Czarnians. It also left me desperate for more, so I’d really appreciate it if DC Comics would let Bennett and Oliver reunite for a Lobo mini-series in 2014. I have a MIGHTY NEED to see just how rough this guy can get. I do have one requirement: Space Dolphins. (Sorry.) (Not sorry.)