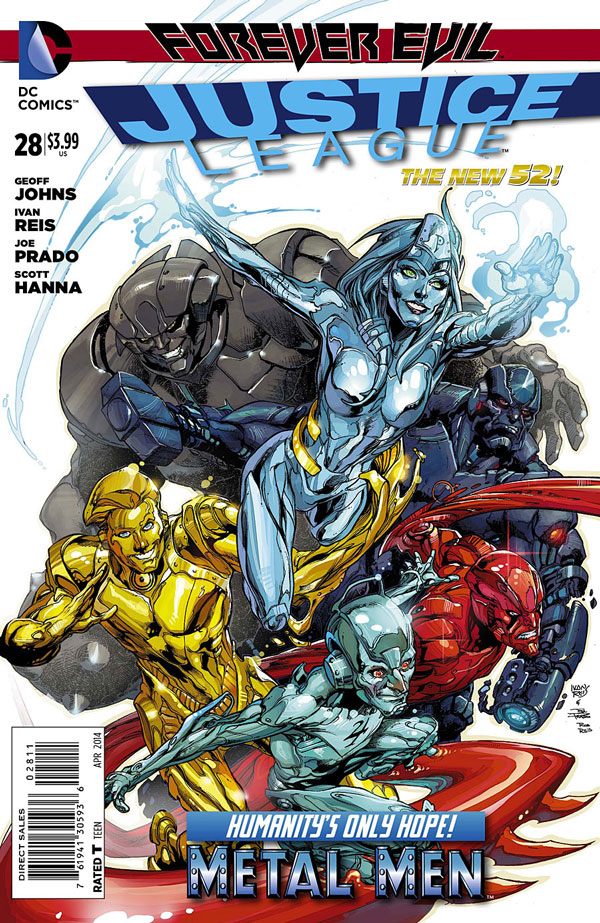 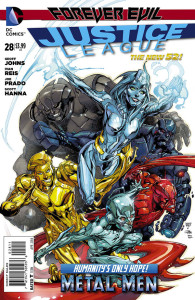 Cyborg may have been rebuilt in the wake of his splitting off from the Grid at the start of Forever Evil, but he’s no closer to having a Justice League to go into battle with. Enter: the Metal Men, a highly classified government project designed to create super-AI soldiers that will do the work no human possibly could. There’s just one problem. They just don’t work that way.

It’s a real blessing to have Geoff Johns at the helm of DC’s first crossover event of the New 52 for a variety of reasons, but not the least of which is his respect for the past. Yes, there have been reintroductions of characters that didn’t go so well the first time out (Lobo) and a few that have been outright disregarded already, but it’s a pretty safe bet that when Johns rebuilds a character (a robot even, in this case), it’s built to last. With the first full arrival of the Metal Men in this issue, we come to see what’s so delightful about their Silver Age origin, even if their circumstances are slightly modernized for today’s narrative. Now a government kill squad who emphatically refuse to have any part in murder, we not only get a squad of characters rejuvenated for the New 52, but ones who hold still at their core a certain amount of old-fashioned values and good old super-heroism. And on top of that, they’re pretty funny to boot — a fact that makes me very eager to see what Johns has up his sleeve for the only briefly appeared Mr. O’Brien.

More endearing than the individual personalities of the Metal Men — all still very in line with every appearance to date — is the shift in Doctor Magnus from his previous, weirdly paternal nature, to a younger, more caring genius who set out to do good in the world. Magnus’ reasons for resisting Cyborg’s pleas figure prominently in this personality revision, and it makes the Metal Men’s existence that much more compelling. To know they are loved and honored in a way that never felt so personal in the past makes for a more sympathetic lead, and one who could actually hold his own amid such crazy robots in a back-up story or, dare I say it, ongoing series. The only thing twitching in the back of my mind is how the story he tells lines up with Platinum’s previous appearance in the Justice League membership drive. And it’s kind of bugging me.

Ivan Reis takes back the reins for this issue, bringing his trademark balance of captivating character moments and dynamic action to life just as the Metal Men spring to theirs for the first time. I love that Mercury is almost never seen standing still, and that Tin looks like he’s going to cry and rust at almost any moment. At this point, it’s easy to run out of ways to praise Reis for his exceptional and consistent capturing of every character. His Metal Men are distinctively drawn, but the real talent is in capturing a Cyborg (or Will Magnus, for that matter) that is remarkably consistent and instantly identifiable. His able partners in Prado and Hanna definitely finish the work beautifully, as does Rod Reis, delivering once again the best colors in the business.

A superb reintroduction of classic characters that should please any and all fans of the Metal Men from any era, Justice League #28 proves once again that character moments and well-thought out updates is what makes DC’s recent efforts so successful, where applied. A Cyborg and the Metal Men series needs to be on the docket NOW!