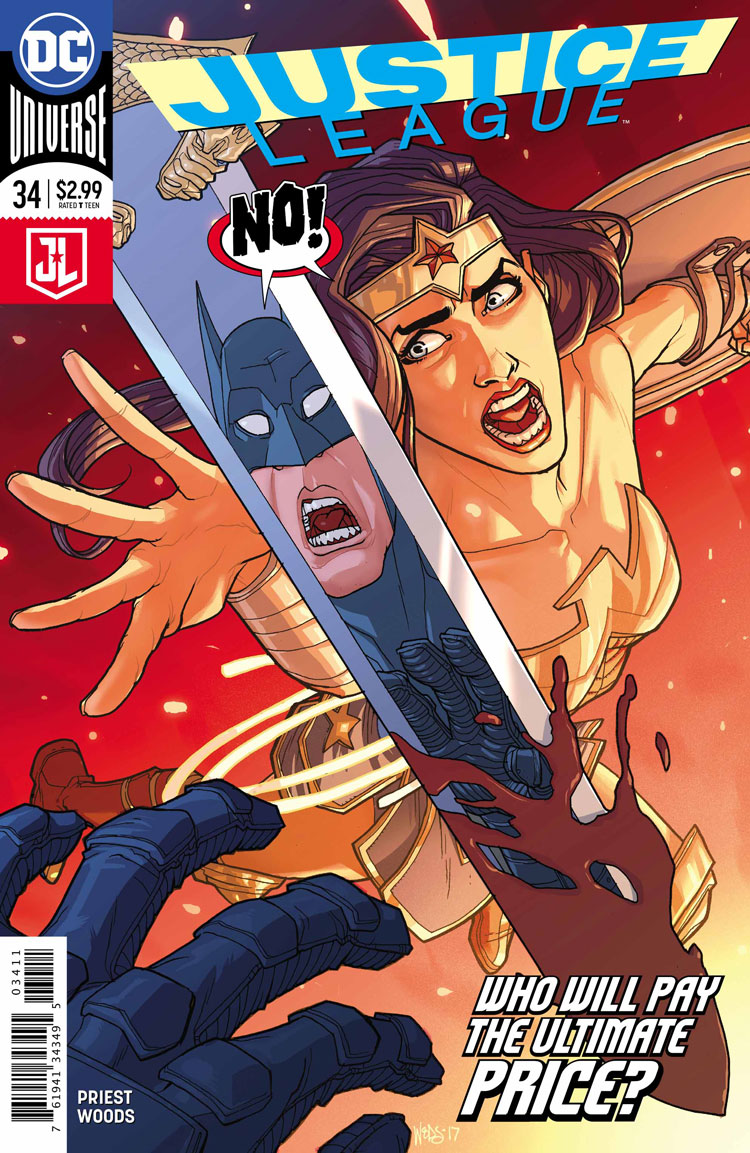 The Justice League faces three concurrent crises, and it proves too much for Batman’s leadership.

Batman is tired. We don’t know why, but we can assume. The reason isn’t important. What matters is that a sleep-deprived, overstretched Batman pushes himself to guide the Justice League when three different disasters happen simultaneously: An alien invasion, a hostage crisis, and a powerful earthquake. Things go well… Until they don’t, and the League’s failings can all be attributed to minor, but significant, failures of Batman’s leadership.

The genius of Priest, as with any great creator, lies in making the masterful appear effortless. In a single issue, Priest tells a full and satisfying story with distinct characters and, more importantly, well-defined relationships between characters that feels natural and easy and right. You don’t need to have read any of the previous thirty-three issues-and-a-Rebirth-special to get who the characters are or see how they work together. You just drop right in and think “This is the Justice League. Not just how the Justice League should be, or could be, but how it is, because how could it be any other way?”

Justice League #34 depicts the team working like clockwork, because the Justice League has (almost) always been the pros. If you want squabbling, call the Avengers. Here, everyone knows their role and performs is mostly without question. And functioning on autopilot, the team almost gets it all done. But a few grains of sand get in the gears, Batman screws up, the whole operation gets thrown off and people die as a result. The repercussions of that screw-up are certain to be explored in future issues, but in the meantime we have a tightly-written action thriller weaving three crises into a single twenty-page comic.

Woods’ art works in perfect concert with Priest’s writing to tell this tightly-wound tale. Characters have expressive faces that tell as much about what they’re thinking as the dialogue, and what could be a complicated, confusing heist is made clear through Woods’ use of dynamic panels and clear action. His use of parallel and mirrored panels, in particular, helps draw attention to small differences and important details that might otherwise go unnoticed. Woods inks and colors his own pencils and it’s incredibly effective. The inking is heavy and distinct while the colors are bright and colorful, well-suited to the somewhat cartoonish faces.

Justice League #34 is a great Justice League comic, in general. It’s also a great jumping-on point if you haven’t been keeping up on Justice League. Priest and Woods tell a story that’s wholly satisfying on its own, while also promising an interesting larger story to come.