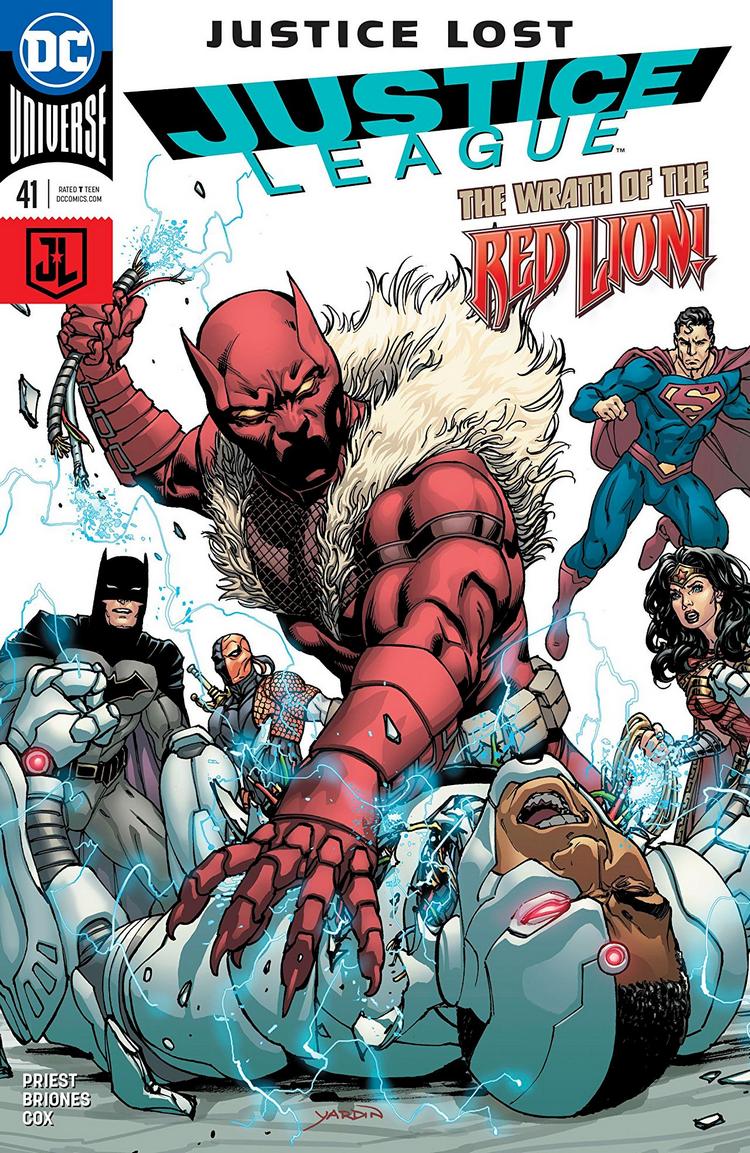 The League encounters the Red Lion as they find themselves caught between refugees and mercenaries following the crash of the Watchtower, while Batman confronts the Fan.

The Justice League finds itself in Buredunia, an African nation that bears a passing resemblance to a less idealized version of Marvel’s Wakanda. A complex standoff ensues; Refugees seek safe harbor with the League, mercenaries seek to apprehend the refugees, ostensibly to root out criminal elements among them, the government of Wakanda, backed by LexCorp and led by the Red Lion, claims the Watchtower as salvage, and the League has to stand between all of them while ensuring the Watchtower’s technology doesn’t fall into the wrong hands.

There is a lot going on in this comic, both plot-wise and in terms of larger themes. Priest skillfully weaves together elements of colonialism and American interventionism with conflicts over refugees and sovereignty, racism and White guilt, all while putting Cyborg’s leadership of the League to the test. Priest avoids the trap that many comics that grapple with politics fall into; the comic never turns into a lecture or a treatise or a five-paragraph essay that leaves the reader thoroughly convinced of the truth of a well-supported thesis. Big ideas are brought up, batted around a bit, and then left to simmer in the background as new ideas are discussed by different characters.

If anything, Priest might err on the side of too little depth in the political themes he brings in; with so many ideas and so little space to discuss them, they risk feeling like window dressing. Are the sites of great American interventionist failures like Saigon and Mogadishu brought up to raise a point, or are they merely there to present the illusion of depth? With the storyline not yet concluded it’s difficult to judge, but for now it’s enough to say that the comic raises big themes and leaves the reader to reach their own conclusions about them, which is a refreshing change of pace from comics that ask little of the audience.

The comic wends through different perspectives, as different members of the League tackle issues around the Watchtower crash site. Priest, again, proves himself skillful at integrating disparate plot threads, seamlessly weaving in Batman’s pursuit of the crazed fan who caused the Watchtower’s crash, a congressman looking to exploit the League’s weakness, and Simon and Jessica’s interstellar mission. Priest’s Justice League run has been complexly plotted without ever feeling confusing our unnatural, which is quite an accomplishment.

Briones’ art rises to the occasion throughout. He demonstrates exacting attention to detail on the mechanics of the Watchtower and the many crowd scenes. He also shows great versatility in depicting each member of the League in action in a way that feels authentic and natural; the Flash moving at super-speed, Wonder Woman deflecting bullets, and so on. Cox’s colors, somewhat lighter with a hint of pastel to match the sunny African plain, enhance the art. It’s not the most thrilling art on the stands, but it’s well-suited to the story and enhances the reading experience.

Justice League #41 continues Priests excellent run on the title, bringing in big themes and handling them skillfully. It’s well worth a read.