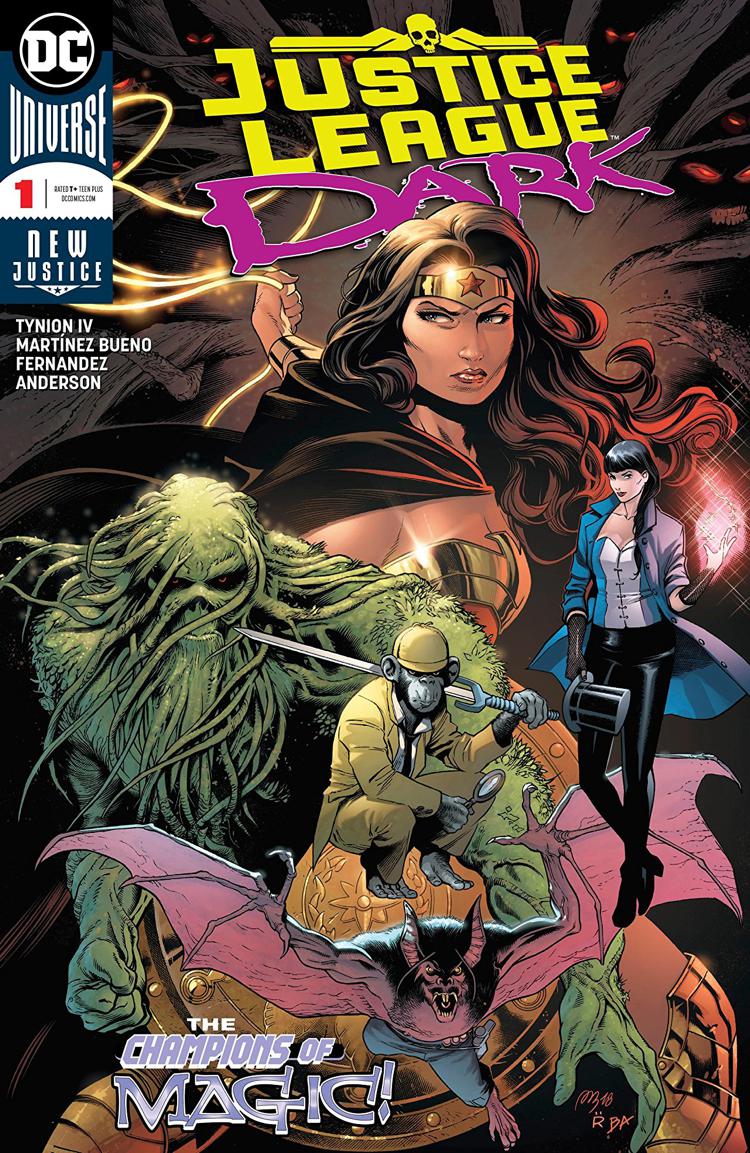 The Champions of Magic.

With the strange appearance of a bloody bunny, Zatanna comes face to face with a vital change in the magical realm. Diana enlists her to find out why, sending them both on a trek through worlds beyond human comprehension. As the team comes together through conversation and old wounds, a cadre of less than heroic magical figures assembles in order to make sure their own ends and desires are protected.

Justice League Dark immediately works as a return to mystical roots for its characters. I always feel like less attention is paid to this particular corner of DC, especially considering that there is virtually no limit to what you can do with a story. All of these characters of varying ties to magic and mysticism, something which I feel the creative team for the comic has leaned into. Magic takes on so many forms and manifestations that telling a traditional superhero story maybe has to come with ominous, strange, and mysterious elements.

Whenever reading a story about DC’s magical characters, I always realize I have a fondness for them. Justice League Dark, while ultimately a story rife with conflict and tension, seems to have an appreciation for the characters that exist in this part of the DC mythos. It does feel as though I’ve read this story before, one which details the dire straits of magic and its denizens, but this also works as a tale that is part of a rather new mythos, bringing something integral back to this comic line.

James Tynion IV is no stranger to absurdist and fantastical story elements. I was actually curious as to how he would set the stage for the Justice League Dark heroes. Using Zatanna as a common thread seems to be a wise choice, as her relationship with others, particularly Constantine and Diana, could easily steer the comic to some interesting places. Tynion crafts the comic as an exploration of darker parts of ourselves and our pasts, along with the reality that we cannot fully evade them. Again, Zatanna serves as an excellent focal character throughout the issue and that is certainly a strength of this story.

I think Alvaro Martinez Bueno gets the overall mood of the comic, though smaller details seem to detract from its atmosphere. Even within the first pages, we see the lights of the stage and Zatanna’s own presence as she does a show. Yet as her face turns to horror, her expressions feel somewhat simplistic. Bueno has a firm hold on how to represent the arcane and occult, and we see this skill enhance by the end of the comic, but it’s in some of the more ordinary, human aspects where the pencils don’t line up with the tone set by the story.

Raul Fernandez has an ironic softness with inks, contrasting the emotional depth we see as the story progresses. This style brings attention to characters or environments in key moments, such as Diana’s appearance at Zatanna’s show and her slight wonder in the museum, as well as Swamp Thing’s inaugural presence in the comic. To put it simply: Fernandez seems to understand where weight really matters. Some scenes are rendered with an excellent clarity, while others push the reader from what is going on, making them become more enmeshed in the mood than the specific action.

Brad Anderson on colors is intriguing. One of the thoughts running through my mind as I read this issue was how the bleakness of every page fit the moniker of Dark for this team. You can feel the shock as Zatanna’s show takes a turn. You can feel the myriad emotions as she convenes with Constantine. Swamp Thing’s conversation with the Tree of Wonder has an ethereal air. Anderson’s work is almost the guidepost from which we can understand and ascertain the goings-on for this comic and the characters within.

Justice League Dark feels somewhat like a rehash of things of DC past, but it is no less enjoyable. The magical arena of DC has frankly been neglected over the past few years, so a deeper dive as part of a trend with the publisher is a nice turn. Wonder Woman’s inclusion is one of my favorite parts of this comic, as her ties to magic are often ignored in favor of other story and lore elements. Magic in DC is assuredly weird, so it fits that the team is as well. However, I’m curious to see how these characters work together and if this can turn into a fresh new story for them and the world of magic for DC Comics.