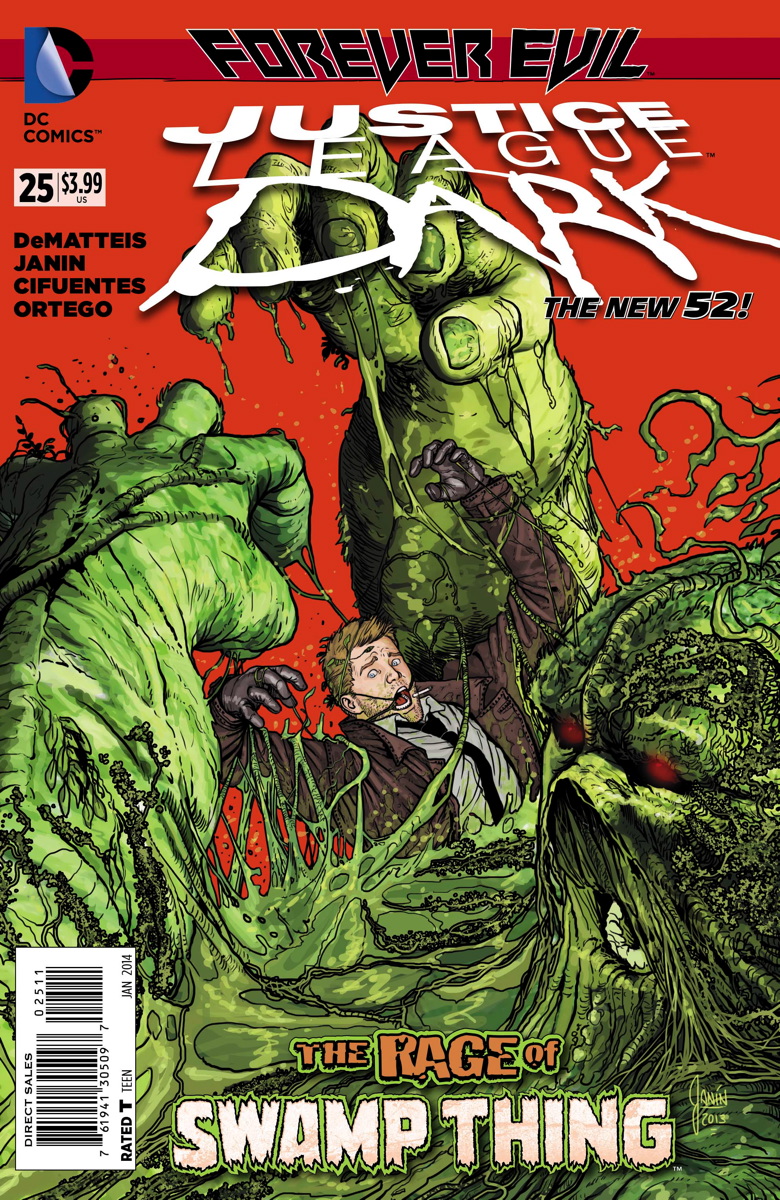 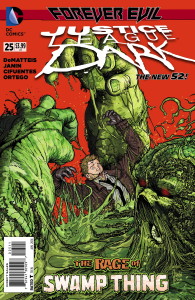 In the aftermath of Trinity War, John Constantine has been left on his lonesome, now bereft of the team of misfits and antagonists that he’d accumulated into a seeming branch of the World’s Greatest Super-Heroes. What he probably didn’t expect was that there would be an even more antagonist team waiting in the wings once his original colleagues were captured by the Crime Syndicate. Enter Nightmare Nurse and Swamp Thing, ready to help John rescue his lost love Zatanna. And Constantine may never be the same again.

J.M. DeMatteis continues his inaugural story arc from last issue, finishing the set-up for the greater Forever Evil: Blight (18-part!) crossover still only in its second chapter. It’s already become clear that we’re in for a much more metaphysical confrontation, with the Blight’s origins revealed last issue, but the travails of the main characters here cement that presumption. While the battle scenes feel a bit abstract as a result, DeMatteis grounds the story in a much more interesting conflict: the one bubbling up among Constantine and the two newest Leaguers. We haven’t gotten to see a ton of Swamp Thing-Constantine crossover to date in the New 52, save Charles Soule’s brief two-parter in Swampy’s own book, but you easily get the sense here that there’s a significant history here between the two, not to mention the more obvious history between John and Asa, the Nightmare Nurse.

To be honest, I’ve not yet warmed to the Nightmare Nurse’s character. I recognize the retro horror vibe she’s meant to represent, like a 1970s film victim turned protagonist. I sort of liken her portrayal to Eli Roth’s Werewolf Women of the SS in that she keeps one foot in a dark humor or campiness at all times. It’s a difficult thing to insert into this universe that’s grown ever more serious though, and I have to wince a little at her costume even still (although that’s likely to no fault of either DeMatteis or Janin). In a book that took Zatanna out of fishnets and into pants, having a nurse in a purple miniskirt, cap, and thigh-high boots seems a bit incongruous. Alas, maybe it’s just me. As a balance, however, I’m pleased to see one magic-related character make her New 52 comeback in this issue with a new look, and maybe even spied a second. Liam, is that really you?

At any rate, Janin delivers yet another phenomenal issue, giving us some of the most detailed work we see on the stands today. His facial expressions have begun to rival some of my favorite artists’ of all time, and it’s not at the sacrifice of fluidity and movement across the page. Layouts retain his now-characteristic diversity, sometimes broken apart by the suggestion of electricity, sometimes simply stacked in beautiful slender panels that open to a fuller page. Janin’s detail on Swamp Thing in particular is quite lovely, giving a sense that he is truly a collage of plant life built from the inside out.

A fun read that brings all the pieces together to sync up with its Trinity of Sin compatriots Phantom Stranger and Pandora, Justice League Dark #25 brings us face-to-face with the evil the team is meant to face, but still gives us the sense that we haven’t even begun to scratch the surface on what this crossover event is meant to be. With 16 parts still to come, that’s probably a good thing. In the meantime, watching the personalities start to fall into place is an enjoyable event in itself.