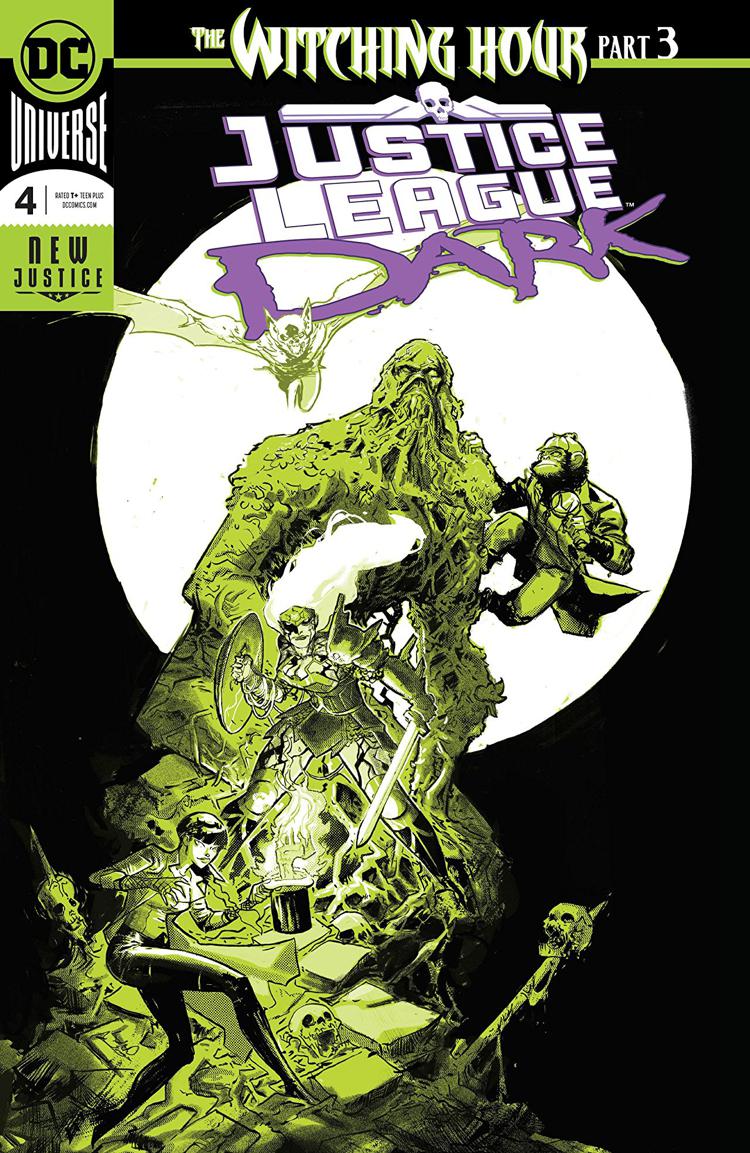 Rebuilding magic is the work of a coven.

With newly awakened powers, Wonder Woman and the rest of the magical crew head toward Nanda Parbat. Then all hell breaks loose. Not everyone on the team understands the situation, and those who do are beyond morose. As goddesses and avatars battle, Diana tries her hand at solving the issue, only to be found within the clutches of those who wish to restore the world but by use of their immense power.

James Tynion IV builds in many noteworthy narrative elements in this issue. For one, Zatanna has very few words. At first glance this may feel as though she is not getting her due, but every time she speaks, her voice has an air of significant gravity. She knows that she is not just facing a powerful threat, but her friend being thrown into that selfsame fire, and every time she has a piece of dialogue it’s important. Magic has always been fickle in the realm of comics, yet Tynion takes a new approach and focuses on the power of a coven, imbued by the abilities of gods. Even innocent curiosity and discovery feel vital, and I think that addresses not just the nuances of magic in the DC Universe, but the revelation that some know more than others and that this distinction has a major impact on the story.

Alvaro Martinez Bueno glimmers. The distorted images, reflective of the might and wonder of magic in the DCU, are wonderfully rendered. You can catch tiny glimpses of a twisted reality, all which blend into the confusing but enjoyable developments of the issue. Martinez Bueno is a practiced artist in the world of the arcane, and it certainly shows in this installment, warping our sense of reality and order to fit that of a world built and lived in by deities.

There is something about Raul Fernandez’s inks that have an air of levity about them. Or, instead of lightness, incredulity. So many amazing and frightening things are happening that there are times it’s hard to keep up. Yet, were Fernandez to go darker, the story may be enveloped by a sense of hopelessness, rather than a curiously macabre wonder. While the story is chaotic and messy, it doesn’t seem heavy, which I feel works with the characterization that emerges in each page. It’s like being caught in a world you could never imagine, but not feeling completely lost. Fernandez adds a different layer to this story that keeps it from diving deep into the grim while also addressing the dire straits of each of the characters.

Brad Anderson blew me away in this issue. Justice League Dark #4 features chaotic, warm, and destructive tones that are both remarkable and unnerving. The slim departures from these hues, especially as Bobo opens a potential means of escape, are a jarring kind of contrast. Anderson’s colors are beautiful, even if marking the destruction of a plane of existence, and they are just as intoxicating as they are unsettling.

Justice League Dark #4 is a lot in a lot of ways. Our dark and wonderful foray into the world of magic is rather intense, revealing the naivete of some and the wisdom of others. Things are really about to be shaken up, and Diana’s inclusion in this story shows that she is not just a warrior, but an agent of magic. There seems to be much in store for us in subsequent chapters, and if this issue is any indication, the team behind the magic will continue to shine.