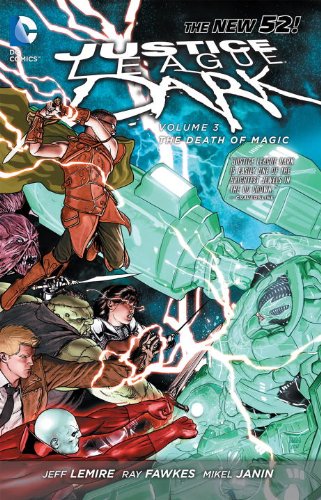 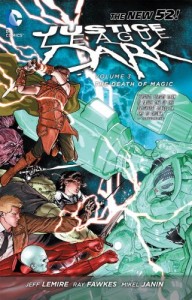 In the aftermath of a great battle, the sorceress Zatanna and unwilling mage Timothy Hunter have gone missing, teleported away by the fables Books of Magic. Left behind is the rest of their team, determined to bring their missing comrades home safely. But just wear have they been taken, and what will it cost Constantine and the other monstrous heroes to get back what’s been taken? From the House of Mystery to the shores of a world of magic come threats no normal Justice League could handle. Only the Dark hold the key to saving the world this time…

Jeff Lemire continues his stellar run on the premier magic-based heroes of the DC Universe in this — his second — volume, joined by co-writer Ray Fawkes. The Justice League Dark is one of the most interesting premises of the New 52, and one so simple it’s hard to believe no one ever thought of it before now. Put together DC’s top mystical/metaphysical characters — monsters, witches, ghosts, and golems — and lend them the name that makes so little sense that it has to drive the story in interesting directions. And it does. Lemire has made a point of not letting the “Dark” overshadow the “Justice League” here, and while all of the members act completely in traditional character, we get a fresh take on their motivations and circumstances just by virtue of their grouping.

The off-again, off-again romance between John Constantine and Zatanna figures prominently in this edition — which is a great feat considering they rarely share screen time in the story — and we witness the beginnings of a new romance take shape between two of the most prominent members. Frankenstein remains his stoic, uber-courageous self, clearly one of the most traditional hero figures of the team, despite his appearance. I often wonder how he or any of the other members of the Dark team would fare in the main Justice League title, and that’s to the great credit of the authors here, who have bent over backwards to create a dynamic that balances both the idiosyncratic natures of these weirdos with the reality that each one is equal to Superman or Wonder Woman in heart and cunning. 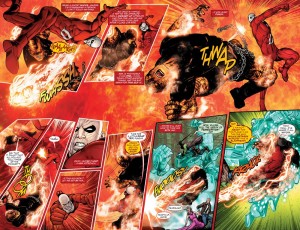 The main story, a trip to a world of magic where young Timothy Hunter is destined to rule, is a fun romp with a lot of great, even funny, character moments, but in reality, the real treat of this issue is in its second story. A three part adventure guest-starring Swamp Thing (who today is a permanent member of the team) and the Flash, this portion of the volume foreshadows the team’s eventual meeting with their JL and JLA counterparts in later issues, and just begins to show the real potential behind the idea of the Dark team. In a vacuum, the Justice League Dark is just a collection of mages, but put them next to someone whose very nature rings of science fiction at his core and you get to see every little nook and cranny of what makes this book unique. It’s in the juxtaposition with someone like Barry Allen — not precisely a skeptic, but not exactly a true believer — where the real magic happens. I mean, what good is a magic trick if everyone in the room knows how it works? 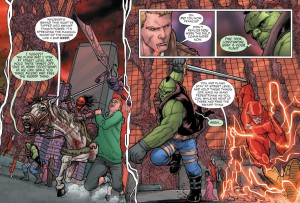 With the exception of a single opening prelude drawn ably by artist Graham Nolan, the entirety of this volume is rendered exquisitely by series artist Mikel Janin, my pick for best artist of 2013. This volume is but one example of the prowess Janin possesses in terms of illustrating both types of characters: the strange and the banal. His style borders on completely realistic, with a touch of personality to each facial expression and body movement, rivaling some of the best artists of my youth on the Justice League (you know who they are). His inking is absolutely perfect, giving a surprising amount of detail without ever losing sight of the page as a whole. Xanadu’s beauty receives just as much attention as Frankenstein’s scars or Doctor Destiny’s grim visage, leaving the reader with the sense that every page is like a grand Renaissance painting come to life (and filled with super-heroes).

For my money, Janin is reason enough to pick up this volume, but fans of the Dark characters, particularly Zatanna and Constantine in this volume, will find plenty of reason to love the story within. A true Justice League, even without the multi-colored tights and impassioned battle cries, this team delivers a fun adventure without losing sight of the emotional beats we’ve come to expect as modern readers. Highly recommended for any comic book lovers who have been searching for something a little bit quirky in their super-heroes. You won’t be disappointed.