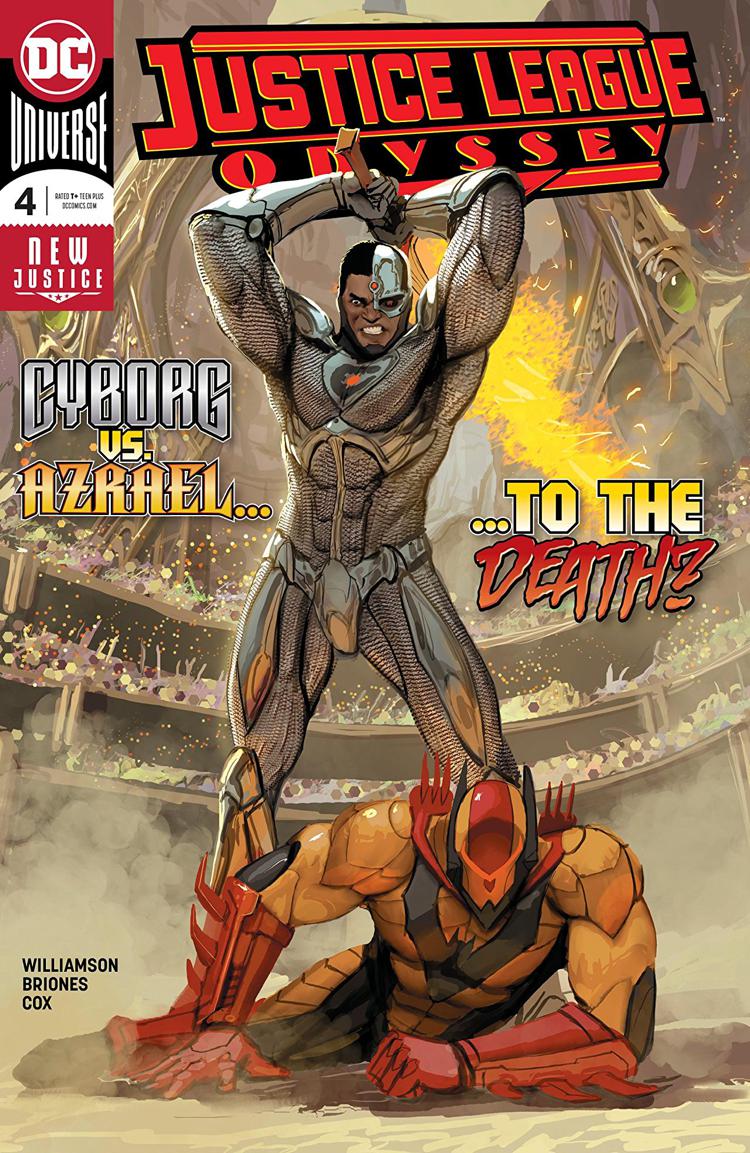 You’ve been a pain in my metal…

This space-faring iteration of the famous League has found its way to a planet  that worships Vic as The Machine. He immediately feels uncomfortable, and his teammates’ varying perspectives on their current trek and its revelations don’t quite help. Still, Vic isn’t the only one on the fence about his potential to be a deity, which eventually puts the team into an entirely different situation to sort out.

Justice League Odyssey has offered a slow-build to a new corner of the DC mythos. Just as questions and stakes for this team are building, so is a sense of anticipation. With this fourth issue, the series feels as though it’s moving at a suitable pace and allowing the story to unfold through the characters and their connections to continuity.

Joshua Williamson allows characters to run the play, so to speak, creating dynamic story progression. In real-time, readers must process any new piece of information just as quickly as the protagonists do. Williamson setting this story’s foundation on feelings of urgency and the fear of change and potential allows common themes to emerge in unique fashion. The primacy of emotionality and humanity are important elements of the plot for this issue, and they hearken back to Vic’s earliest dialogue in this series. This singular focus lead to some bumpy shifts in dialogue and setting, but by the end of the issue you can see these factors smooth out and point to aspects of the next chapter.

Philippe Briones creates striking interactions between art and pivotal moments in the comic. Some images are powerful, equipped with strong poses and an angular style which emboldens characters. Briones takes these moments, like Vic’s victory in the arena, and gives them a presence that fits the idea of an odyssey, a grand adventure. Other moments have less of an impact, yet, this execution works out in other ways. Many characters and events feel soft, leaning into a more emotive style of storytelling. As such, some scenes don’t seem to have as much resonance, while this also allows the evocative elements of Vic’s story to have more prominence.

If Jeromy Cox’s work on this comic could be summed up in one concept, it would be twilight. For one, you can see a sequence in the developing color schemes that essentially match the phenomenon. Cox starts with light, warm hues and moves into the cool shades as the story winds down, using striking oranges and reds for emphasis in integral scenes. Cox also creates visual metaphors for twilight and change, giving a new expression for Vic’s doubt as he potentially uncovers a major part of his history.

Diving further into the mythology behind Justice League Odyssey’s gives us a chance to look more closely at each character’s role among the team. This time, we see Cyborg’s continued hesitation about his status as a god, and what everyone will do in order to have their desired story play out. JLOdyssey ends up being not just a narrative adventure, but one for the creators, whose choices provide new and interesting ways to view the story and the characters who inform it. This latest installment is another great example of how a story, wild at its inception, can coalesce from varying ideas and still keep an air of mystery and surprise.