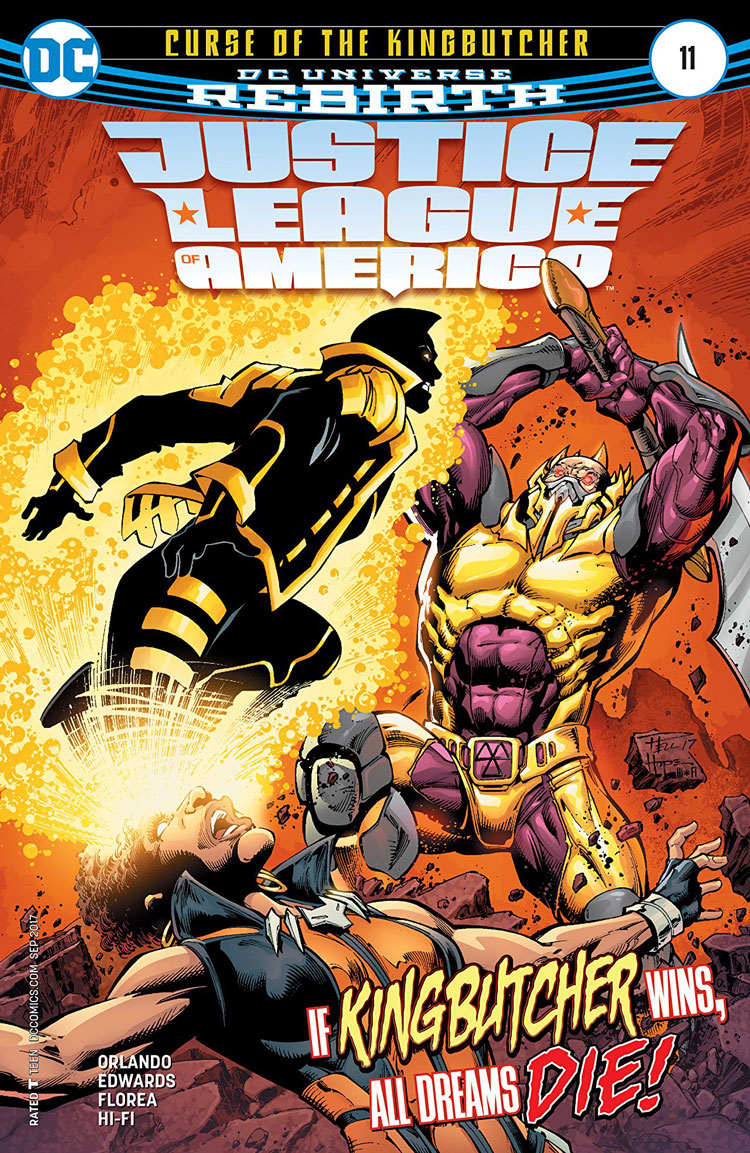 The focus is firmly on the Ray as the young hero’s hometown is threatened, and the Kingbutcher goes after the dreams of the most personal target of all — Ray Terrill’s mother. Meanwhile, the Atom divides his focus between curing Frost with the help of Dominic Mndawe and continuing the search for Ray Palmer. A search that has been fruitless — until now!

Even in the best of circumstances (those which I’ve thankfully been blessed), the relationship between queer people and their parents is often strained, if a relationship even exists at all past a certain point. It’s hard to live in a closet for 18 years or more and not carry resentments and hurts around, words and actions that may even have dug deeper into your hide than your guardians ever intended or believed.
There’s a reason for that. The closet doesn’t give queer kids the chance to build up a callus to the repetitive nature of heteronormativity and all its invasive measures. The closet leaves you raw and exposed, despite seeming like the ultimate protective measure. It’s not, as it turns out, because it’s specifically not designed to be so.

The protection the closet offers can be physical, that much is true. Kids (and adults) who are forced into the closet by circumstance or deliberate insistence — whether continuously or, as is so often the case, intermittently throughout one’s life — do find safety. But that is what makes it so insidious. As its structure is based on the idea of the shared lie between oppressors and oppressed, there is no emotional protection afforded in its darkness. It is always digging into the skin, a constant anxiety and hyper-emotional burden bearing down, and the scars left can often take a lifetime to heal, if ever.

Even as I write this, I get itchy about my childhood, and I certainly didn’t come out of it with as much trauma as the Ray did. Writer Steve Orlando captures the Ray’s anger, almost irrationally exhibited, with great acuity, in the scenes coming out of his confrontation with the mother that kept him housebound for his first 18 years. Like any queer runaway, Ray remains unable to reconcile his mother’s point of view, and I’m afraid there’s a chance a lot of readers won’t really get why.

Ray isn’t cold by virtue of being unheroic or even transformed to Batman’s worldview of assuming the worst in people. In fact, Orlando makes it quite clear that Ray remains as committed to the idea of hope and trust in the goodness of people as ever. But what the author makes crystal clear in this dichotomy between Ray’s behavior as a hero and as a son, is that trauma — well, it gives you blind spots. Trauma means you may never be able to reconcile one aspect of your life while always being able to give your all to every one else.

Batman is living, breathing trauma. That’s a comic book convention we don’t have to think too hard about. But his trauma isn’t the same as Ray’s, and threading out what the closet does in terms of Ray’s childhood kept in the dark continues to pay dividends.

Meanwhile, the guest art by penciller Neil Edwards and inker Sandu Florea is some of the strongest representations of super-heroics we’ve gotten on the title since Ivan Reis and Joe Prado’s work in issues #1 and #2 (although we are about to see them return in issue #12). Edwards gives us the quintessential JLA-style Batman with sleek cowl and cape, and delivers that classic anatomy one looks for in a classic adventure book — not to mention a fine, fine butt on the Ray. This series has had a lot of artists in the past six months. Need for consistency aside, this issue provides what should be the bar going forward.

Lobo is brawny, Black Canary is rendered with the kind of ferocity we usually see passed over for bombshell styling, and Frost has every bit of the vulnerability she’s been developing under Orlando’s writing. The colors by Hi-Fi are bold and delectable, particularly in the action scenes between Ray and the Kingbutcher, although a little confused as we hit the final pages. I’m not sure if the lab tech receiving signals was meant to be some unknown or Ryan Choi himself, but if it’s the latter, the color from skin tone to hair was wrong across the board.

Nevertheless, Justice League of America #11 stands out as a really great moment for elucidation on the nature of queer pain and the insidiousness of the closet, giving the Ray the level of depth he deserves as a shining star for the DCU. Orlando, Edwards, and the rest of the team deserve a round of applause for the sensitivity portrayed, particularly while not losing any of the excitement or building threads of the series as a whole.