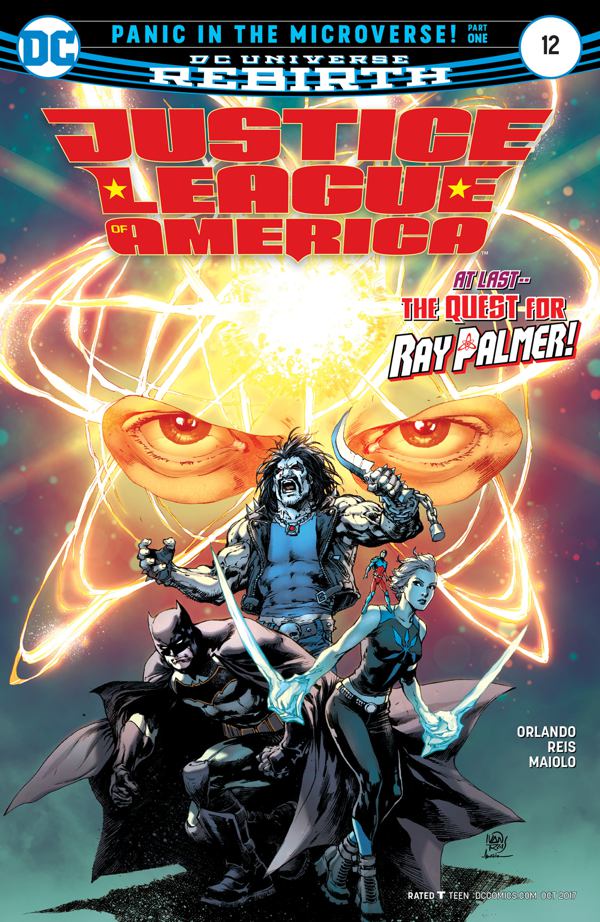 Let’s get micro! It’s time to voyage to the Microverse!

A subset of the JLA are off to find the missing Ray Palmer, but what they find in the Microverse is not what they anticipated…

That’s the gist of this arc kickoff, and Orlando sets everything up well. Arc transitions in team books can feel very clunky at times, but this one is fluid. It makes sense to send a smaller (pun!) JLA crew into this mission and I love the blend of personalities he chose. Lobo’s appropriately timed “bastich”-es delighted me immensely and he’s a great foil for the reigning Atom, Batman and Frost. My favourite aspect of Orlando’s use of Lobo is that the character is not simply on the team to be the comedic relief that some writers slot in Deadpool-esque characters for. This Lobo is a cantankerous, horrible person…but he’s capable of a LOT. He’s an indestructible powerhouse, but Orlando shows in this issue that he’s also not an idiot, which I thought brought a really interesting dynamic to this team. They’re getting some chemistry, 12 issues in, and Orlando is taking this comic interesting places.

The return of Ivan Reis to penciling duties is extremely welcomed. Reis’ work in this issue is solid, and exactly what I expected when I read “Ivan Reis”. Marcelo Maiolo’s colour work makes the pencils shine, especially where the Microverse is concerned. Maiolo’s work is what really made the Microverse feel like a unique place to me, rather than just a small version of space or something. The two are a strong battery and they capture the personalities of the team members well.

Justice League Of America #12 is a solid jump-on point for the series and a good start for the arc. I’m more interested in the Microverse than I can ever attest to being in the past, so Orlando, Reis and Maiolo definitely did something right there. This is a team book that has the right dynamic of fun in it, considering the powerhouse characters, and I’m enjoying where Orlando is taking this story.