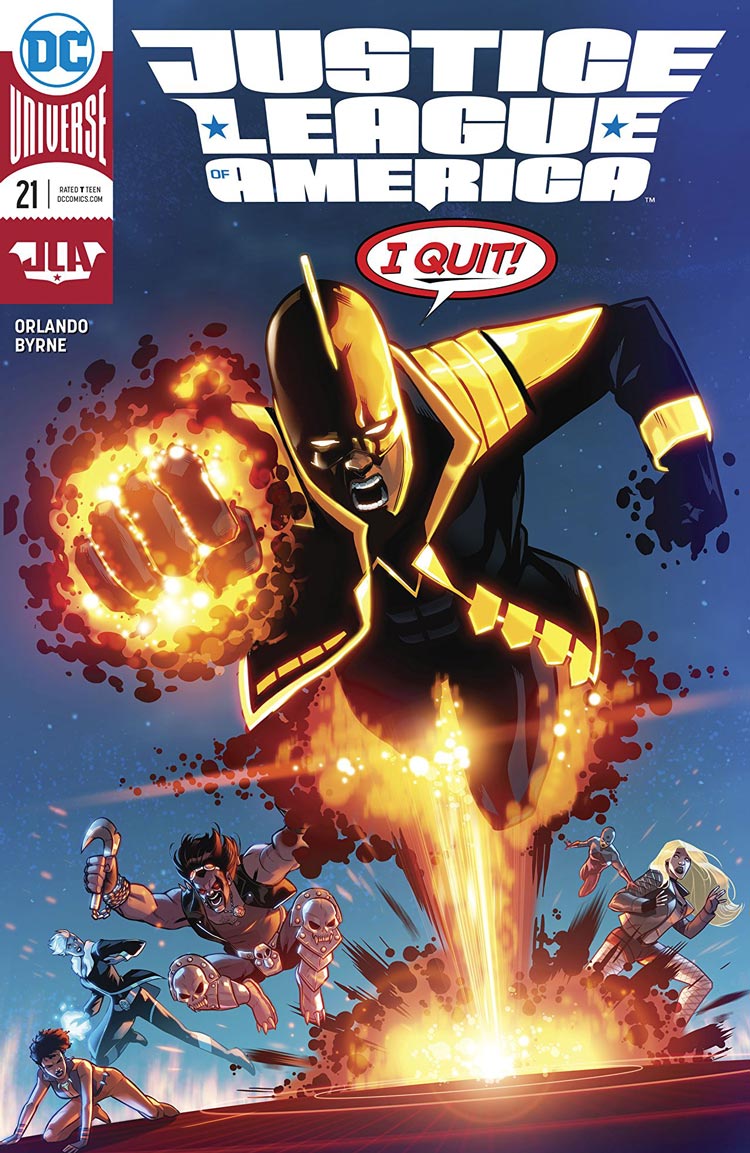 The Ray has left the Justice League of America and returned home to Vanity — only to find there’s been some changes. A mysterious new hero has taken up residence in the light, and one thing is certain: Aztek the Ultimate has a lot to teach Ray. And maybe he has a little to teach her, too.

With the latest issue of JLA, writer Steve Orlando has teamed with guest artist Stephen Byrne to give us an interlude in the finest Justice League tradition. Heroes come and go all the time, sure, but usually it comes down to a major roster change or an editorial demand. Superman is off-planet this month or someone else is wearing Batman’s cowl for a change. It’s rare to see a Leaguer leave over perceived ethical differences.

Decades ago, Green Arrow took a powder from the JLA for much of the same reasons the Ray has retreated to Vanity, with nearly as much sturm und drang. Firmly believing that the group wasn’t living up to its promise to him, and all the while never questioning if he was indeed living up to his promise to the JLA.

And the reality is, as Orlando writes Ray, he’s not wrong. Batman devised this League to be something different. Something better. But Batman is Batman. The problem is, for whatever reason (editorial?), Batman himself is gone. And so we find the Ray in a little bit of a self-centered spot, and is readily put in his place — not by the Dark Knight, but by a light one.

Reintroducing Aztek as the legacy successor to Grant Morrison’s original Ultimate Man (such successor first seen in the alternate future of Morrison’s own JLA in “Rock of Ages”), Orlando draws a nice contrast between the man who blasts the light like a strobe and a woman who channels it through smart tech and ancient wisdom. We’re supposed to believe early on that Aztek has figured out what the Ray doesn’t. She’s cleaning up Vanity. She’s there for the people. And she can see the big picture.

Ray ends up being the one that delivers a sense of nuance to the battle the two heroes engage themselves in. And that scenario is simply a microcosm of what makes this book so different than your traditional JLA — so different that it now strikes me as surprising that Green Arrow hasn’t just shown up and grabbed a seat.

In reality, it isn’t just the specific heroes Orlando has assembled. Yes, having a gay hero and a woman of color (indigenous Mexican Latina, I’m told) central to this story — not to mention an Asian man, a Black woman, and more — helps break the mold of what a traditional Justice League looks like. But the true shift in vision comes from embracing the perspective of the outsider, the marginalized, the other — and realizing that’s a position of power. It’s just not power in the way we traditionally think of it.

For Ray, it’s compassion. It’s the ability to see past the black and white of heroes and villains to really understand why he does what he does, and what a hero can actually be to people, even those who do bad.

Artist Stephen Byrne returns to the Ray for this issue, having last drawn his introduction to the JLA in the hero’s eponymous Rebirth special. It’s a fitting combination, not simply because Ray is queer, but because Byrne’s work brings to 2D form this sense of 3D (4D even?) light that both Ray and Aztek epitomize.

Byrne’s figures are solid, but feel filled with energy and lightness, almost as if weight were replaced with luminosity. Byrne running the entire gamut of (presumably digital) pencils, inks, and colors makes for an exceptionally coherent and fulfilling package, with even the inactive scenes delivering characters with an inner glow.

The illumination Byrne gives to everything around Ray, however, from rubble to the reflections in Aztek’s helmet, keeps the idea of bringing light to the darkness central for both heroes. Backgrounds at times are a little overly simplistic, but when the opportunity to provide the fade of a sunset behind Ray and Aztek, the artist really harnesses everything in his arsenal to drive the point home. It just feels a little jarring when flipping back to the JLA team in sanctuary, persisting without Ray’s light.

A meaningful interlude that reintroduces a fascinating character (Aztek) and shines the spotlight on the very conscience of the League (Ray), Justice League of America #21 is another fine chapter from Steve Orlando, and a great chance to see Stephen Byrne do what he does best: shine.