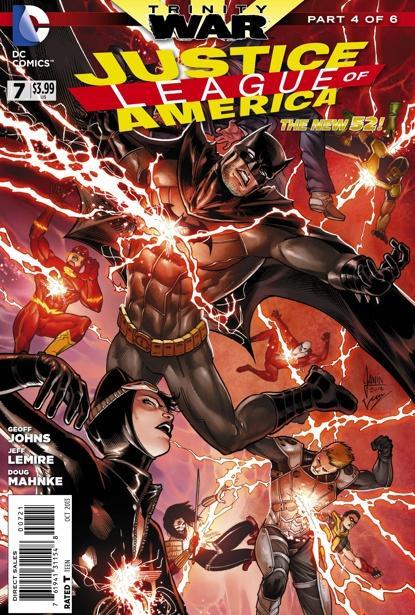 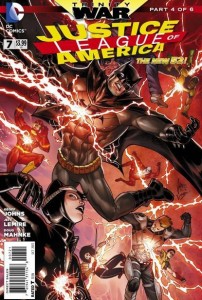 Act two begins to wind down as the threads of the Trinity War start to weave together into a cataclysmic set of circumstances. The reshuffled Justice Leagues are still pursuing separate agendas — each alongside one member of the Trinity of Sin — no closer to knowing the truth behind the murder of Doctor Light. Worse yet, the Outsider is ready to make his next move while Pandora’s Box takes control of yet another super-hero, one which definitely is known for her temper (uh oh).

Lemire and Johns craft yet another relatively non-bombastic issue in the midst of revelation after revelation throughout the crossover event to date. With no follow-up on the grand pronouncement at the end of part three (Justice League Dark #22), part four feels a bit anti-climactic, as the reader has been left somewhat waiting for the other shoe to drop. Nevertheless, the writers end up crafting a chapter that opines freely on the nature of pure good and evil, a condition Pandora seeks out and may not truly have the ability to find. From Luthor and Doctor Psycho to Pandora herself, characters weave in and out of the narrative with thoughts or conditions that blur the line between villain and hero, friend or foe. And no one rides that line as precariously as the Atom, now an admitted spy and divided loyalist to two Justice League teams. Her guilt is a pleasant contrast to the Manhunter’s any-means-necessary attitude, which I also find somewhat refreshing for a character so long mired in somewhat stifling nobility. At his root, J’Onn is a hero even still in the New 52, but being able to live up to the moniker of a “Manhunter” makes him far less of a more alien caricature of Superman that he may have been in the past.

Doug Mahnke once again proves why he’s utterly perfect to take on the World’s Most Dangerous Super-Heroes, as his sharply rendered features and deft action are the perfect foundation for visualizing the Justice League of America. His Doctor Psycho is intensely creepy, as is his rendering of a now fully debilitated Superman, whose veins are surfacing full of kryptonite poison and the potential for excruciating death. Mahnke packs a lot into a page, which is particularly important for this last chapter before action begins to heat way up and speed this arc toward its conclusion. Despite being somewhat dialogue-heavy, Justice League of America #7 never feels overwhelmed by the talking heads moments, and that’s a sincere credit to Mahnke’s visual talent.

It’s been odd that the seemingly rougher team book among the three in the Justice League franchise is the one with the most focused character moments, but it is in fact the one Lemire and Johns are credited with collaborating the closest on. And to some degree, it’s more fascinating for that fact, as it would be so much easier for the pair to choreograph a few poignant fight scenes and take it home. Justice League of America #7 may not have furthered the mystery of Trinity War to any great degree, but it serves as an admirable and enjoyable second act, as the event wraps up and leads into the next big crisis on the horizon.