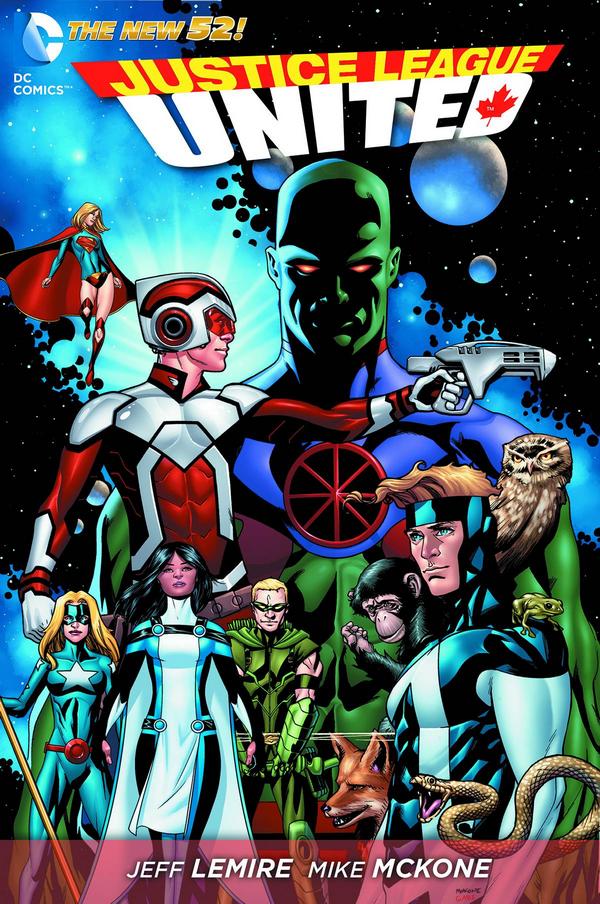 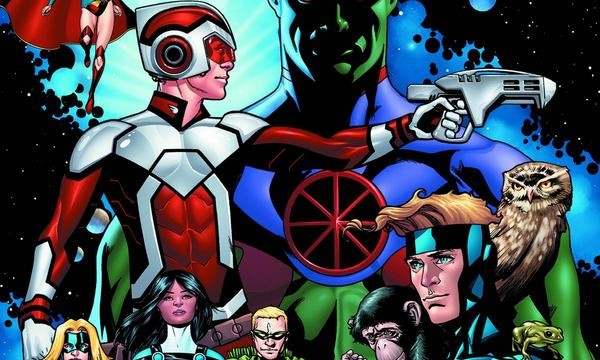 From the ashes of Justice League of America rises Justice League United, a team-romp in space featuring an unlikely group thrown together by circumstance.

Jeff Lemire pens this collection of the JLU and while some may be critical about how he gets this band together, there is some magic in this crew. The “origin story” happens very quickly for this team, as this story is about the adventure much more than how this team came to be. JLU Vol. 1 is a space adventure featuring a classically evil bad guy, an extinction level threat and all kinds of hiccups along the way for this team. You may feel like you’ve read this before, but Lemire’s work with their relationships is what makes this fly. Animal Man and Green Arrow have a relationship similar to Spider-Man and the Human Torch – a friendship built on bickering – and Supergirl seems like she may have found a place on this team. Stargirl and Martian Manhunter continue their interesting friendship (which was the best part of JLA at the end) and Hawkman brings some good ol’ fashioned grit to the team. Adam and Alanna Strange bring a new dynamic to the book and the greatest mystery, from the very beginning, is the new hero Equinox. Her subplot is certainly the most interesting of the collection and she brings the excitement of “new blood” to this collection. New characters tend to bring an energy to a book and Equinox certainly does that.

Lemire’s dialogue is the strongest aspect of this volume, as the events of the story aren’t revolutionary. They are entertaining, but JLU Vol. 1 isn’t going to shock you with twists and turns that you don’t see coming. The strength of this book is the relationships in this new and awkward team, and there is definitely some chemistry between these team members. He writes Martian Manhunter particularly well, as his stoic nature can sometimes be difficult to lock in on for some writers. He is well rounded in this collection and overall, this first adventure for this team is just fun. Sometimes there doesn’t need to be shock and twists to have a good time, and this story is just a good, adventurous, fun time.

Mike McKone’s artwork is solid throughout and he is very consistent from the first page to his last in the volume. He handles the large cast and cosmic dynamic well, capturing their personalities well in the artwork. I won’t hold Supergirl’s costume design against him, but I will admit that he handled it well considering what it is. He does not hyper sexualize the female members of the team, which was appreciated, and there are splash panels (particularly with Equinox) that ripple with power. His pencils suit Lemire’s script well and at no point is the art by McKone the weak link in this collection. The final part of the collection, the issues that act as a bridge to the new arc, are poorly penciled in comparison. Timothy Green II’s artwork does not compare to McKone’s at all and when the pages are bound together and it is easy to make comparisons, it is obvious that this artwork isn’t up to par. It closes the collection on a low note, I am sad to say, as the characters are awkward and look uncomfortable in their own skin. After 3/4 of the collection being sharp work by McKone, the air is pulled from the sails of the collection by the final pages and I found myself undecided on if I will continue to the next volume if the work is as inconsistent as the finale of this volume.

Justice League United Vol. 1: Justice League Canada is, for the most part, a fun collection featuring some classic Justice League characters thrown into the mix with some new blood. This successor to JLA is stronger than that title ever was, and having a team operating in the cosmic realm that isn’t Green Lantern based was a nice change of pace. Lemire writes these characters well and McKone’s work is solid. While I wasn’t absolutely riveted, I did enjoy myself and that’s more than I can say for some collections.