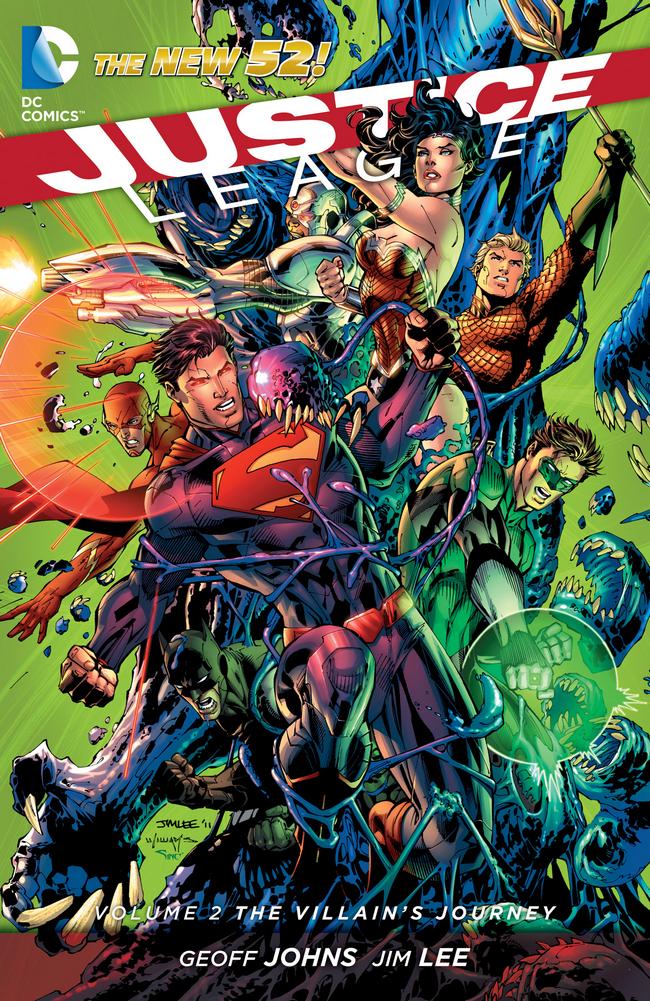 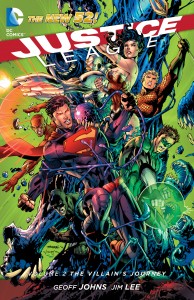 The second hardcover from DC’s flagship book of The New 52, “The Villain’s Journey” takes the Justice League from its roots five years ago and propels it to the present day. Having maintained closed ranks for all this time, and gathered relatively few times to save the world as a group, members of the League remain virtual strangers to each other — a fact that leaves them vulnerable to attack from one close to them. Seen primarily through the eyes of government liaison Steve Trevor, this is the story of the Justice League’s growing pains toward truly becoming the World’s Greatest Super-Heroes.

It’s an interesting reflection that this volume is titled in such a way to reflect upon the path taken by the team’s first modern day enemy — the author-turned-madman Graves — rather than that of one of their closest allies. Read as a collection, this storyline seems so much more about the development of Steve Trevor than even the Justice League or its latest antagonist. Johns has managed to revitalize Trevor much the way he did Hawkman in JSA or Mera in Blackest Night, taking C-list characters long left to suffer in cobwebs and dust them off, reenergized for a brand new audience. I do appreciate Johns’ attention to the interaction between the hero protagonists, but it’s definitely Trevor’s motivations and inner turmoil that takes center stage throughout every chapter of this collection. From his abduction by Graves to draw out the team to defending the League against encroachment by government forces, Steve Trevor is the lynchpin to all the primary action, and I couldn’t be happier.

Certainly, the costumed heroes fill the screen, as Jim Lee’s art (with some early assists from a few other quite accomplished artists) performs its usual magic to elevate these characters into virtual gods on the page. Superman and Wonder Woman in particular are radiant in Lee’s hands, bursting across the panels like the physical and emotional powerhouses they are meant to be. But even Lee’s quieter moments — particularly the concluding confrontations between Wonder Woman and Steve Trevor, and the Amazon Princess and her new beau — express a poignant power to them that merits quite a bit of awe. The book as a whole may not live up to the absolute cohesiveness and sheer perfection of pencil and ink that volume one did (I suspect, because lead time was so much less on these later issues), but it still stands as one of the stronger collections of art in the New 52 as yet.

It’s worth noting that this collection also includes reproductions of all the variant cover art for issues 7 through 12, and that is a substantially beautiful presentation all its own. A true sophomore effort, Justice League Volume 2 is a strong prelude to what seems like the true development of the team forthcoming in both the central title and its upcoming offshoot Justice League of America. While it may falter a bit in consistency of art, it definitely makes up for that in new world building, a task already paying off in the monthly books since.