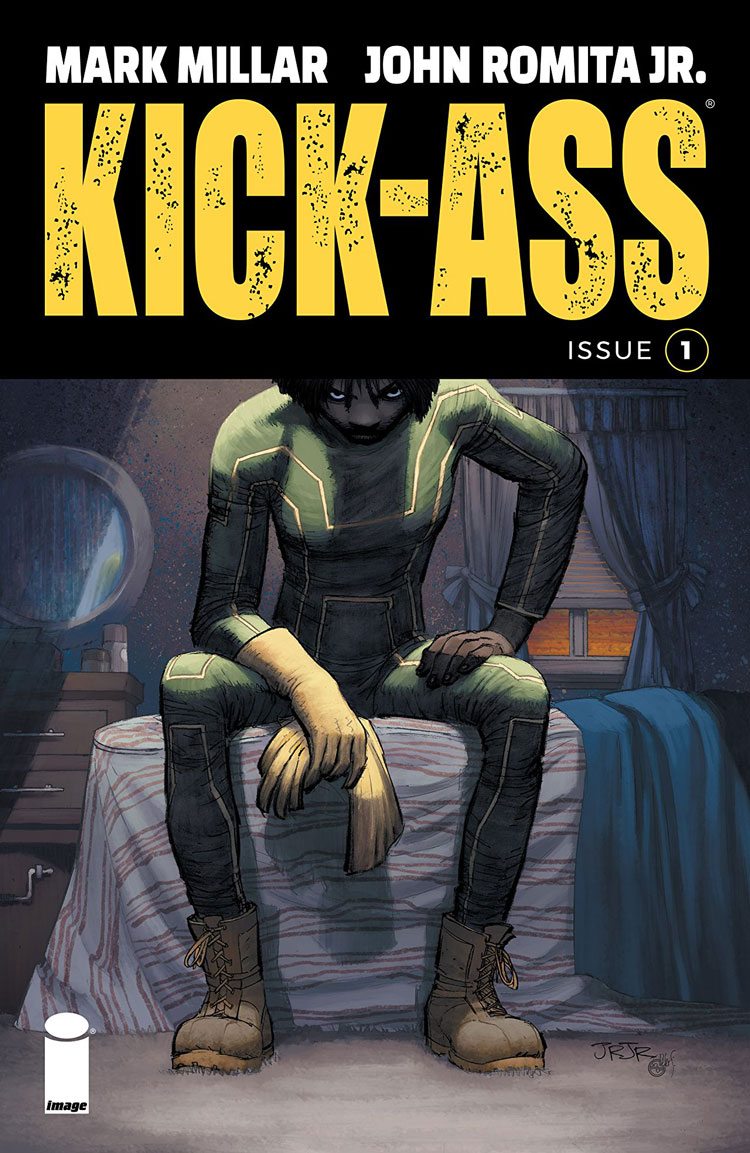 Amidst the announcement that Mark Millar and John Romita Jr. were releasing a new Kick-Ass series was a lot of confusion. This series bears the Kick-Ass title, but it is a very different story, with all new characters and adventures.

After the success of Kick-Ass as a comic and a movie, it is not quite clear why they took this new direction, but I am glad they did. This new version of Kick-Ass is a lot of fun so far, and I can’t wait for more. Unlike many angry comments I have seen regarding this new series, this is not a case of “SJW’s ruining comics”, but instead a case of talented creators creating a cool, innovative new story with new characters that enhances the successful universe they have already created.

The story opens on our new Kick-Ass, Patience Lee, but we don’t know her yet. This introductory issue provides just enough backstory to frame the new character and her experiences, while also cutting straight into the heart of the action. Patience has a unique set of skills and a unique set of troubles that inform her character, and it is great to see such a dynamic, powerful character in the role of Kick-Ass. Her motivations are strong, and her punches are even stronger.

John Romita Jr. holds onto a lot of his art style from the previous Kick-Ass books, but still manages to make this book feel separate and slightly more modern. The fight scenes are composed dramatically, and do a great job of showing motion and setting different scenes.

However, his light-handed art style combined with very monochromatic color palettes leaves the page feeling flat and monotonous. The art reads as strong in some places, but overall, it struggles to hit more than one note. With such modern, dramatic and dynamic characters and story, the art needs to punch it up a notch to do credit to the other elements of the book.

The real goal of this first issue is to introduce Patience. She is our new main character, our new Kick-Ass, and this is her chance to shine. From her military training to her personal life, goals, and motivations, she is an excellent character. She is everything I want from a superhero. She doesn’t get lucky, or fall into radioactive waste, or get chosen for a super-soldier makeover. She is a real person, a real woman, with real experiences and problems.

Unfortunately, her strength and depth of character is not reflected well in the way she is portrayed visually.

From different angles, she looks like a completely different person. This is our chance to bond with her as a character, but that is difficult to do when constantly re-assess that it’s really her in the panel, not someone similar with a slightly different face shape, body shape, or hair style.

Her hair is one of the main issues. It seems that the artists gave up halfway through finishing her hair. The textures are inconsistent and vague, and the highlights and coloring often make it look like she has bald spots. In some close-up scenes, we see the textured, varied hairstyles of her and her family, but overall it feels unfinished, and it does a disservice to the design of the characters.

Patience is a strong person, a strong woman, and a hero. She deserves better than looking like an inconsistent, vague version of some pop star when she is the main character of this series. I hope her design solidifies in future issues so we can have a real taste of her strength and power reflected in her appearance.

Overall, this is a great first issue in terms of character and story introduction. It tells a complete origin story, while also giving s a little taste of what is to come, and what it will mean for Patience to slide into the Kick-Ass suit. Based on this issue, I hope to see some Daredevil-esque neighborhood crime-fighting, tossed in with some strong character-building and real-life situations and consequences.

This is a brand new (though familiar) world for Kick-Ass, and hopefully this new take on the universe and a new home at Image comics proves successful for Patience. Like Doctor Who, Spider-Man, or the Flash, the hope is that Patience takes inspiration from the character of Kick-Ass and what he stood for, and creates another aspect to that legacy by taking on the mantle and continuing the fight for justice.