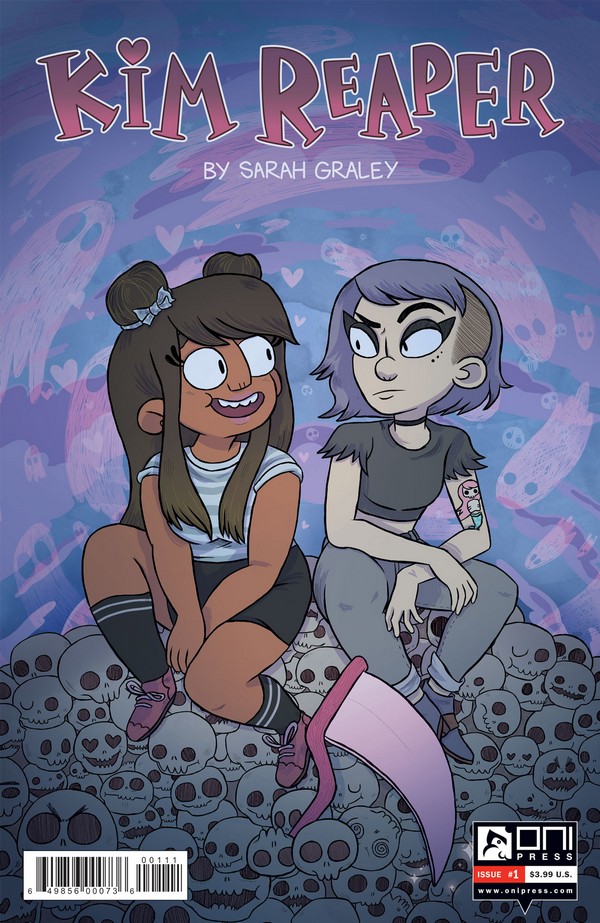 A new and hilarious series from Oni Press is here! Becka follows her crush through an ominous portal accidentally, learning a secret about Kim in this first issue of Kim Reaper!

I love the comedy that Graley brings this comic. She has this way of writing characters where everyone else can clearly see their flaws but the character themselves is oblivious to their issues. The main character, Becka, is adorable and I’m definitely rooting for her to win Kim’s heart. My favorite character is a certain buff man who enjoys, working out, having too many cats for it to be healthy, and “never ever sleeping and downing endless energy drinks”. He is the best thing ever.

I also love the small amount of world building you learn in this issue. The reader gets a glimpse of what grim reapers in this universe are and what their job exactly entails. I also just love the fact that new part-time grim reapers get stuck on animal duty, it feels like the kind of job lower ranking reapers would get stuck with.

The art is so much fun. It’s cartoonish in the right ways and squishes characters so that they almost look like chibis. I love how each character has a distinct design to them, none of them are the same height or shape and it’s awesome to see that kind of touch to a comic. All the cats are super cute too and I love that most, if not all, the cats have something distinctive about them. I love how half the cats are usually in human poses like standing on their feet and putting their hands on their hips, it adds to the cute factor.

I especially just love the Buff Cat Man’s character design. He looks like Fabio with an ugly face and a penchant for steroids. He walks around in short jorts only, like he’s some kind of never nude. He literally has a six-pack on his forehead and it is amazing.

You should read Kim Reaper. I rarely see a comic that is written, drawn, and colored by the same person when it comes to reviews like this and I find it to be spectacular that Graley pulls this feat off and pulls it off well. The characters are fantastic, the story is hilarious, and the world is interesting. Go check it out!