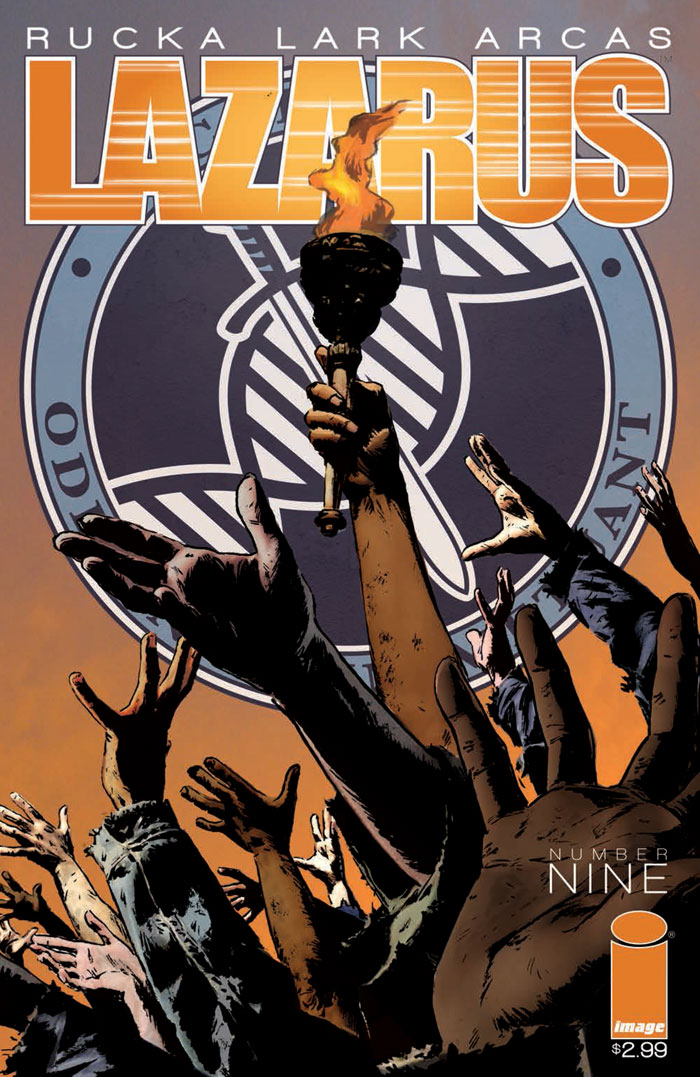 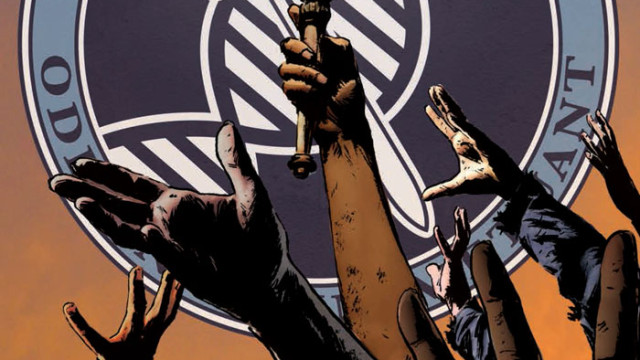 “The Lift” reaches its tense conclusion as individual ambition meets the machinations of the Carlyle family on two fronts. Today, Michael and Casey go through the Lift process to starkly different results, while in the past, Forever must earn her role in the family — by destroying the one person who loves her most.

One of the many things I find so compelling about this series — aside from the brilliant female lead and the dystopian future concepts laid out in incredibly well thought-out detail — is the ability Greg Rucka and Michael Lark have to pull you into every character as if he or she is the central figure herself. I am reluctant to describe any of the characters that appear on the pages of Lazarus #9 as “supporting,” as so many of them do so much more than hold up the narrative to anyone else’s benefit.

Marisol’s pain at having to fight her hardest against the young woman she’s been training so closely is starkly evident on her face, and resonates on the page to far greater effect than one would expect. That single look, followed up by her defeated bow — presumably waiting for Forever’s killshot — told as much story as Forever’s own look when confronting her father.

And that’s just one example of how successful this partnership between writer and artist is for Lazarus. The world and all of its inhabitants (family, serf, and waste) create a beautiful mélange of motivations, personality, and implied history, building the most thorough reality into which the reader can fall backwards eagerly.

With the conclusion of the Lift process, we get a detailed look at how serfs come into family service, a nice little bit of exposition that neither slows down the story nor feels unnecessary. Seeing how Casey and Michael each reacts to the path laid out before them is curious, but what’s most surprising is the fair tolerance for dissent the Carlyle family allows.

This issue’s events actually tell us an enormous amount about the socio-political structure under which the waste and serfs live, and it’s not a replay of imaginary 1950’s communist fantasies most American writers rework in developing stories of totalitarian regimes. There is a very particular dynamic at play here, and it evolved in a very specific way (not too unfamiliar to where we are headed, unfortunately), and that is what’s leaving me clamoring for more… this month.

In truth, there’s always something in Lazarus that makes me tap my fingers waiting for the next issue to arrive at my shop. Rucka and Lark are weaving a seriously complex world here, but one that is easy to get lost in. Every one in the book is a potential point of view character. Every one of those, even members of the family, can be related to by one reader or another. And every issue brings a new unraveling of what we don’t know, or what we thought we knew. That’s brilliant serial storytelling, paired with a long view for the big picture, and pure enjoyment on every level.