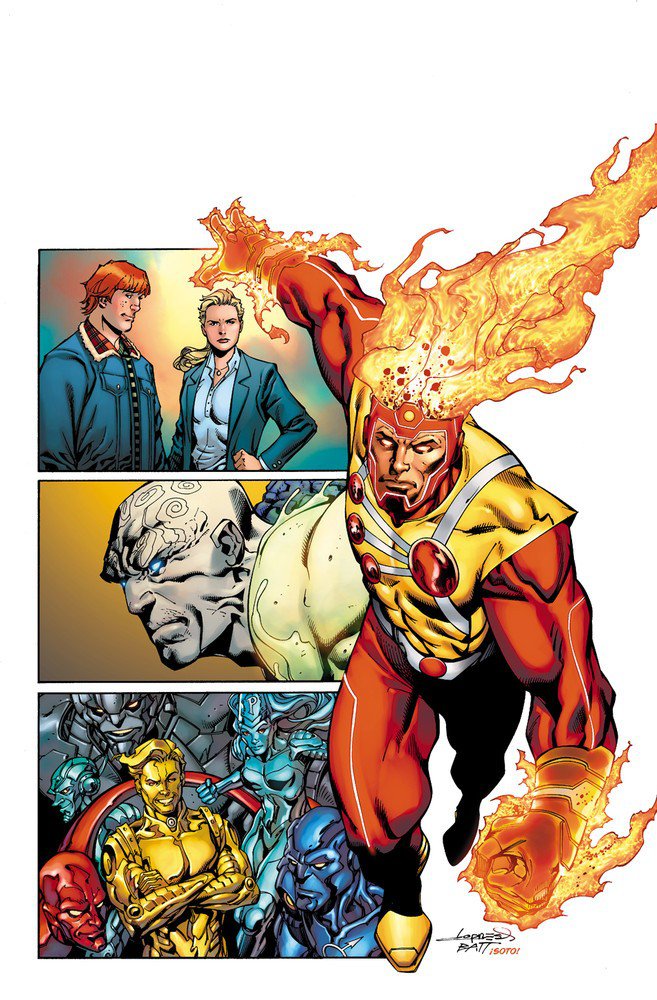 With only the slimmest of ties connecting it to the television show of the same name, Legends of Tomorrow #1 gives readers a chance to sample some fan-favorite characters filtered into present DC Universe continuity. Of course it’ll run you eight bucks, but defying traditional comic book pricing logic, Legends of Tomorrow #1 is actually four full-length comics in one package. The stories include Firestorm, Metamorpho, the Metal Men, and Sugar and Spike.

As his profile is highest of the four, Firestorm garners the most space on the cover and gets the leadoff spot in this comic. This incarnation of everyone’s favorite flame-brained hero is a combination of Ronnie Raymond and Jason Rausch (yup, slightly updated/modified last name) with Ronnie in the driver’s seat. The setting is Walton Mills, which was used in the New 52 Fury of Firestorm: The Nuclear Men series.

Written by Firestorm co-creator Gerry Conway, this story is a nice blend between homage and exposition. Shoutouts to Conway’s collaborators on the 1980s The Fury of Firestorm the Nuclear Man series, Pat Broderick and Rafael Kayanan and a predestined confrontation with Danton Black – Multiplex – fill this twenty-page adventure with plenty to make longtime Firestorm happy, while maintaining the New 52 continuity. Fans coming to the comic from his appearances on The Flash or Legends of Tomorrow (snazzy title) television shows are going to find little in common with this Firestorm, but they are sure to find plenty to like, as Conway’s tone for the tale is reader-friendly and character-driven.

Eduardo Pansica’s art is solid, excellent in action sequences and better-than-serviceable in the spots in between. Of the stories present in this anthology, Firestorm has the most action sequences, nicely balanced by Conway. The range of settings and the number of explosions keep things loud and fast-moving, and the uncredited colorist (I want to attribute it to Chris Sotomayor) brings the heat. The mundane moments need a bit more consideration with the camera choices, as there are upshots that aren’t entirely necessary and straight-on shots that need a little more pizzazz. As mentioned, Pansica excels at the action sequences, and his work with inker Rob Hunter and the colorist melts together nicely, visually boosting those bits even more.

The transition from Firestorm to Metamorpho makes sense, to a degree, as both characters have levels of elemental control under their purview, but the story, written and drawn by Aaron Lopresti, has a different pace, slower and definitely more measured. At some points, as writer/artists are wont to do, Lopresti adds a little too much dialog, but being the writer and artist, he is able to balance those moments. He gives his characters moments to shine and provides readers with smartly detailed, bold close-ups.

Sotomayor is on task for colors, and he augments Lopresti’s drawings nicely. The first part of “Two Worlds, One Destiny” is solid, bright, and filled with comic book archetypes, which must be invigorating to draw and color. Visually, this is the boldest installment in Legends of Tomorrow, and given the small cast, Lopresti is able to infuse each with personality. Visually, Simon Stagg is a cross between Donald Trump and Marvel Comics’ the Owl. Sapphire is lovely and youthful, determined and fit. Java is brutish and muscular, the most physically expressive member of the cast. As for the headliner, Rex Mason, whom Lopresti refers to as an explorer, but also “somewhat of a celebrity,” the Element Man is not completely defined in this adventure. He’s morphing and incomplete, his full appearance waiting for a dynamic debut in a future installment. The otherworldly threat also presents just enough to raise eyebrows and encourage verification that issue #2 has been placed on pull lists.

Following that, Legends of Tomorrow #1 comes back to Earth a bit, and Gotham in particular. The Dark Knight Detective is not present, but in his place are two other beloved characters from DC’s rich history. Sugar and Spike make their debut as adults in “Fashion Sense,” a tale written by Keith Giffen, and, if I hadn’t checked the credit box, I would swear drawn by Giffen as well. “I Can’t Believe It’s Not Giffen” is actually Bilquis Evely, whose style is heavily influenced by Giffen, despite Giffen not providing breakdowns, as he frequently does. Evely’s faces are Giffenesqe, but her characters are emotive and engaging like Doc Shaner’s. Her art combines economic line choices, but expansive, deeply detailed settings and attire. Ivan Plascencia uses a cool color palette, lush with purples and blues, which makes everything else on the page pop, particularly the main characters.

Sugar and Spike moves along at such a snappy clip that I barely noticed the “End.” tag as I continued along to the next, and final story in this comic. Once I noticed the disconnect, I doubled back, and re-read it, thanks to Giffen and Evely. This tale is a smart, street-level caper that is part Lethal Weapon and part Scooby-Doo, steeped heavily in DC Comics’ nostalgia.

Yildiray Cinar’s art is lively throughout the tale, but in some spots, the vibrant coloring of the Metal Men competes against itself, through no fault of Cinar or colorist Dean White, to produce a visual cacophony in the panels. Luckily, those moments are sparse throughout this chapter, and, if you find yourself immersed in that predicament, simply focus on the nearest face and study the collaboration as White uses gradients to define the depth in the largely open planes of the faces Cinar draws. The Metal Men have a couple key moments to show off for the readers, but those bits mostly come as teases, giving readers plenty to look forward to next issue.

While some readers may simply be compelled to trade-wait their preferred character’s collected edition, the price structure on this series is actually a bit of a bargain. I waffled with the notion of holding out to buy Firestorm in trade. Recent DC trades are in the $15 range (American). A six-issue series priced at $7.99 each, the individual issues come down to just under $2. Six times two is twelve, so it’s a bargain for all four stories. I was in for Firestorm, I’m most likely in for Metamorpho, especially as Lopresti has that character poised for an enchanting mix of fantasy and sci-fi, and Sugar and Spike really won me over. I see no reason not to continue. Is it the perfect book? No. But it is like getting a collection of really interesting reads all at once.