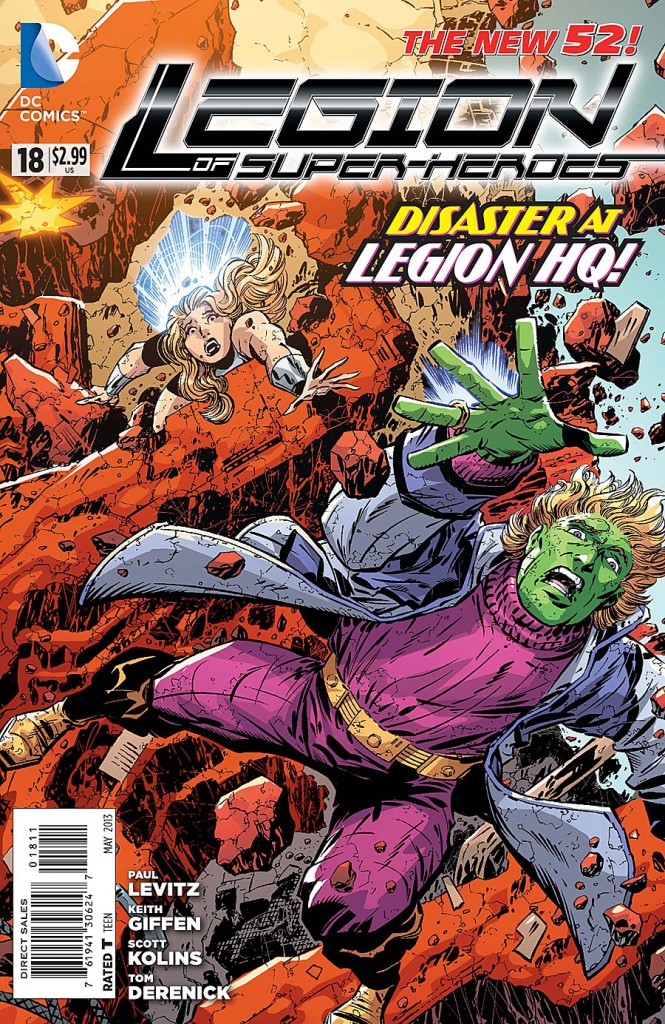 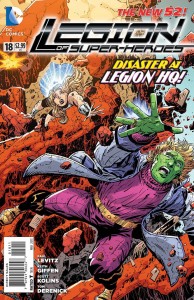 Nobody does a “Things Fall Apart” story better than the Legion of Super-Heroes. As the United Planets suffers a technological blow in the 31st century, the Legion is scattered across the galaxies — some reeling from death and destruction hitting close to home — and the threat of the new Fatal Five is ever looming.

I came back to the title after a brief respite when Keith Giffen climbed back into co-writing and penciling duties in issue #17, not just because I have always been a fan of Giffen’s work on these characters, but because I have a great love for the Legion. I want to see them succeed, and lately, it just isn’t happening. Unfortunately, Giffen’s tenure on the book has been cut short, having only penciled a single issue and co-writing only these two (and perhaps one more). But, in short, his participation here shows.

This issue, with just as many characters and scenarios as in previous chapters, seems so much more organized and less overwhelming, with each hero having a moment that defines them for the reader succinctly. There are a few minor flaws in characterization one could either attribute to misled scripting or PTSD — such as Polar Boy’s flip answer to the worry around Sun Boy’s death last issue, or Dream Girl’s quick devolution from courageous hero to collapsing girlfriend — but much of the team shines in their brief moments. As a scan of the current scenario of the world at large and an intro to the existing team, issue #18 functions really well for readers wanting to jump in to the next major storyline, and that was exactly what this book needed.

That said, Levitz and Giffen don’t do much more than that here, and the lack of any villainous presence or cause behind the chaos in this issue left me feeling like there was really something missing. But would I have wanted the writing team to sacrifice the opportunity for brief touchpoints on each of the members for more classic hero-villain action? No, definitely not. I can safely wait a month for more development on that end.

With Giffen off art duties already, Derenick and Kolins split the issue, each attempting to style their work for continuity with Giffen’s and only succeeding to a degree. Derenick’s rounder, more fluid style was very pleasant, but seemed overly inked to match his predecessor’s pen. A few characters, Harmonia in particular, seemed a tad awkwardly rendered, but Derenick’s Chameleon Boy is one of the best I’ve seen in the relaunched series to date, giving Cham a real heroic look without making him seem unnecessarily too alien. Kolins’ work is always a good match for the rougher line Giffen employs, but is perhaps too thinly inked and feels a tad rushed by comparison to Derenick. He seems to have a real problem with Dream Girl in particular (as evidenced in previous issues), making her both unnaturally pencil thin and far less glamorous than the core of the character should be, even in disaster movie surroundings.

A solid issue, and one that will bring me back next month for more adventure, Legion of Super-Heroes #18 may just be one piece of the puzzle that puts the heroes of the 31st century back on track. With yet another hero possibly meeting his end in this issue (what is it with those initials?), it’s definitely worth jumping on for the ride to see where it takes us.